The Outsiders Take on Japan

December 15, 2011
Batman and the Outsiders #9 - Pages 8-9
From Geo-Force's guest-staring role on Community, we go to Katana's Japanese-language book store, "Dragon Books". When Batman gave her this side-project, I wondered aloud if there was much of a clientele for her wares on Gotham City. Let's check in on "Mrs. Yamashiro".

So at least one customer. That's good! Or as the following panels reveal, it's actually THREE customers! Pretty incredible, especially AFTER Christmas, but I suppose Gotham is brimming with Yakuza whose wives and children have to entertain themselves while their husbands are participating in bowling leagues/clan wars. 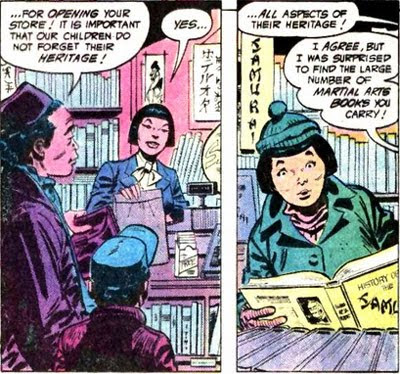 Customers are expected to wear ill-fitting hats, produce proof of majority before flipping through samurai kama sutra books, and not mind the odd English-script sign done up in "Chinese Restaurant" font. If expecting few or no books about martial arts in such a store, they are reminded to look at the word "marketing" in the dictionary. 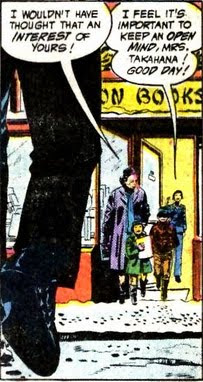 Leaving together? Aww, just one customer then - a family unit. But wait, there's someone else approaching! It may be the busiest the store's ever been! 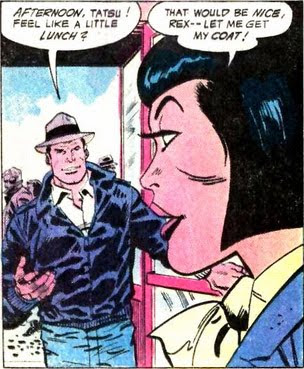 Crap, it's just Metamorpho. And judging by Katana's reaction, the store is so QUIET that she can just take off and leave it unattended. Dragon Books - Opening hours subject to change without warning. Why doesn't she just get a mail order service and be done with it? But maybe Rex will show himself encouraging and buy something. 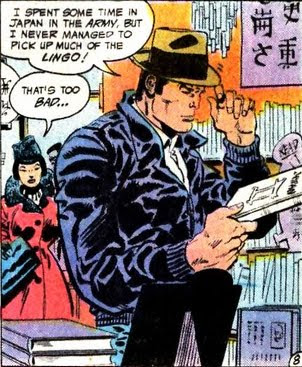 Or maybe not. And he's LIVED in Japan. He's the target audience AND a friend of Tatsu's and even he takes a pass. Let's just say it's a good thing Bruce Wayne is financing this front. And it's not that Metamorpho is anti-Japanese (a real risk in a place where many people dress in 1940s fashions). He's game for some Japanese cuisine. 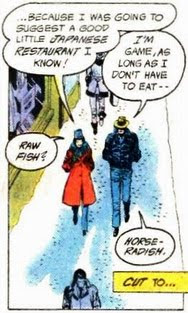 Sushi, yes. Wasabi, no. I didn't even know he ATE. Sometimes I think the 1980s are really far into the past, a world in which studio execs write a definition of sushi for Bladerunner, and "horse-radish" is eaten with "raw fish" by people who have lived in Japan. Cut to... 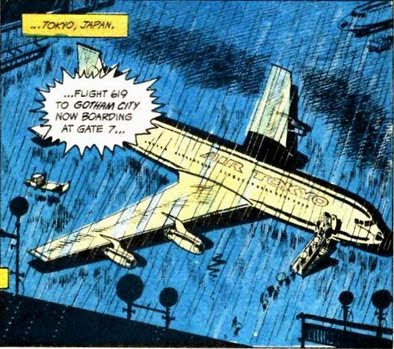 Air Tokyo is a fictional airline, by the way (it makes as much sense as New York Airlines). Question: How many of you have brought (or in these times, been allowed to bring) an umbrella aboard a plane? Because many of these Japanese tourists are bringing one to a snowy location. It's the opposite of packing light. Just to make sure, they're packing bathing suits and horse saddles. You never know what you'll need. Wait, why ARE we looking at this plane? 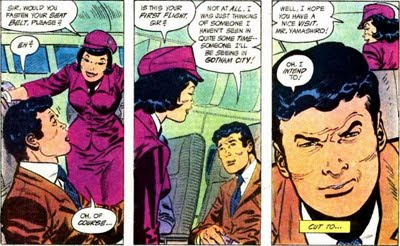 Because Katana's lascivious and/or dangerous husband is aboard! I know for a fact that he doesn't show up again this issue, so it's gonna be a slow flight.

Cut to... next week. And Batman. I promise.
Comics Metamorpho Outsiders

SallyP said…
Is she the one in pink with the eyes where her nipples should be, or is that Looker? Or is Halo the vampire?

Siskoid said…
Both those descriptions apply to Looker. She's not yet in the Outsiders. I guess they brought her in later to "fix" things.

Halo is the blond in a black body stocking with rainbow colors coming out of the pocket protector area, who doesn't know who she is or what to do with food.