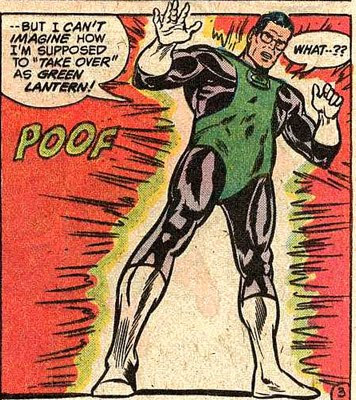 Sometimes it seems like Superman's alternate destiny was always to become a Green Lantern. He's always being handed a ring! In this now classic team-up (well, classic... maybe insofar as it's the oldest issue of DCP I own), Hal Jordan crashes into a Metropolis Press Club award ceremony honoring Clark and Lois and throws his ring to Clark before passing out. Well, of course he knows Clark is Superman, but no one else does. By the way, do you know how hard it is to impress Bronze Age Lois Lane? 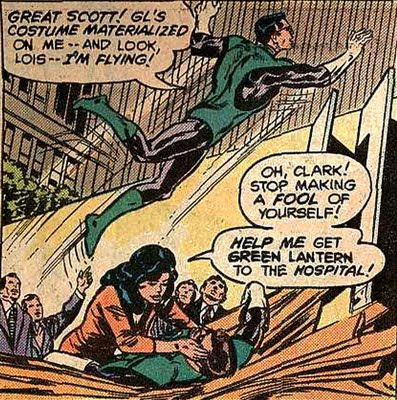 Pretty damn hard. So Clark uses the ring to create a facsimile of Superman to protect his secret identity. 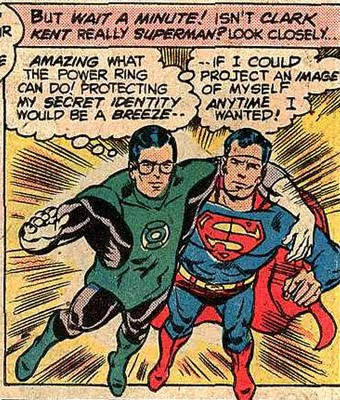 Pretty impressive. He manages a non-green construct seconds after getting the ring on his finger. Maybe his willpower is greater than Hal's! But does he have the experience? The answer proves to be no when Star Sapphire yanks it off his finger because... 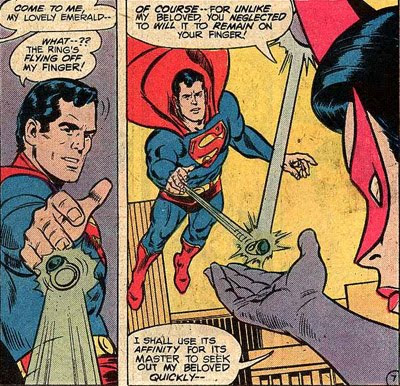 ...he wasn't using willpower to keep it there! Is it me, or is that a waste of perfectly good willpower? I gotta defeat these villains, but I also gotta concentrate on not letting the ring on my finger slip. I guess it's a metaphor for marriage. Anywho, the rest of the comic happens and Superman and GL defeat Star Sapphire, though the "killing blow" is Superman's (XP hogger!). Is he gonna make a move on Carol Ferris? 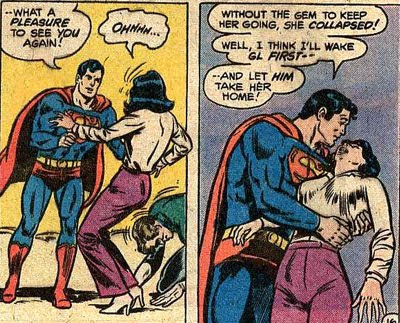 Nope, he's just the best wingman you ever hope to have.
Comics Green Lantern Reign Superman

Siskoid said…
Hahaha, did I write Danvers instead of Ferris? It's Saturday morning for everyone.
December 17, 2011 at 11:27 AM

SallyP said…
Superman just looks...wrong as a Green Lantern. He hasn't the behind for it, for one thing. (That's why he wears a cape!)

MOCK! said…
Reading this early in the morning and still kinda tired, I wasn't really focussed on the parenthesis and kept wondering what Superman's XP hogger was and how it was used to defeat Saphire. I kept looking at the pictures and rereading the dialogue...

Siskoid said…
Any problems caused by obscure asides are strictly the writer's fault.
December 18, 2011 at 8:55 AM

Tom Foss said…
Superman was destined to be a Green Lantern--the greatest of all, had Krypton not exploded. At least, that's the thesis of Superman #257. Maybe destiny just keeps trying to set things right.
December 18, 2011 at 11:13 PM

Siskoid said…
Yes, it's a role-playing joke. Kill the monster, get the points, even if someone else did all the work. (Most games have an XP share system these days to counter this.)