DVD buys this week include the fifth season of 30 Rock, the fourth season of Sarah Jane Adventures, and Peter Greenaway's A Zed and Two Noughts.

DVDs: I finally saw the Green Lantern movie this week and it's a mixed bag. Basically, if you're going to do so much of it in CGI, your sequences probably shouldn't look like video game cut scenes. The Guardians are especially fake-looking, though the hero Lanterns look quite good, as do the action scenes. Ryan Reynolds is not an actor I find particularly engaging or charismatic, and his comedy dialog fell flat for me. The plot itself is gauchely handled, with lots of infodumping to cover concepts that weigh down the movie, like Parallax. And if you're going to make this an obvious first part of a proposed series (because why else set up Sinestro like that?), maybe you should make everything else about the movie is going to be a success. Because if Green Lantern's lackluster performance at the box office prevents the story from being completed, we're left with a lot of dangling plot threads that diminish the achievements of GL "part 1". I don't mean to sound THAT down on it, because I never found it boring or irritating. It's perfectly ok. But its own ambition was to be more than ok, and so it fails. My copy has no special features of note, unless I count the green XBox-type case.

If you're a fan of Spinal Tap, you've got to see Hard Core Logo, in which director Bruce MacDonald takes the same principle, but gives it a more dramatic (but still funny) slant. Hard Core Logo is a Canadian punk band that's gotten back together and allowed their reunion tour to be filmed, and if I hadn't recognized Battlestar Galactica's Callum Keith Rennie (Leoben) as the guitarist, I would not have been able to tell until quite late that this wasn't a real documentary. The film is irreverent and edgy, and I'd call it punk even in the way it's shot. Plus, the music really kicks ass. I've got to get myself a copy of the soundtrack. The DVD includes a useful commentary track and a couple of music videos, one by lead actor and Headstones' front man Hugh Dillon, and the other a sad censored version of Hard Core Logo's Who the Hell You Think You Are? Anyway, I don't want to give too much away, but my recommendation will go as far as putting the film in 2011's Top 5 viewed. So there.

I won Hamlet 2 at this year's Oscar Party pool, and because of my interest in the original play (see my other blog, Hyperion to a Satyr), I put it with the rest of my film collection. Truthfully, it's really not as bad as I was told it was. In fact, it's almost good. Hamlet 2 is basically a parody of those inspirational teacher movies, starring Steve Coogan as a lame drama teacher who tries to save the drama program by putting on a sequel to Hamlet. On the surface, it's one of those quirky comedies that sometimes make the Oscar list, like Little Miss Sunshine or Juno, but some ill-judged gags and coarse language keep it well away from entertainment of that quality. It's too bad too. Catherine Keener's story in this, almost everything about Elisabeth Shue, and the actual Hamlet bits in the final production all point in the proper direction. And then somebody flashes their ass or admit to being molested in a crowded theater and the feeling is lost. I'll have cause to talk about the rather moving Hamlet bits at H2S in between acts. The DVD includes a fairly entertaining commentary track that allows you to track where the director went wrong, deleted scenes, a making of, and a sing-along feature on a couple songs (because the play within the film is a musical, of course).

After our Ed Wood marathon earlier this year, the only thing left in the pink boxed set was a documentary called The Haunted World of Edward D. Wood, Jr. Took me a while, but I got to it, and I must say, it's excellent. Honest, but ultimately loving, it tracks the so-called "worst director of all time"'s life through interviews with the people that worked with him and rare footage and photographs. Vampira is particularly entertaining. The disc also includes Crossroads of Laredo, Wood's first (and unfinished) film, a 25-minute western finally edited and scored, and by turns touching and ridiculously bad. Director Brett Thompson assembles a small group of people to do commentary on both films, as well as on footage of a couple premiere events, and these are as insightful as the films themselves. Additional documents include a couple hundred pictures and drawings, easter eggs on each menu, and an uncut interview with the director for the A&E Biography on his school chum Tim Burton, only relevant because Haunted World acts as a kind of answer to the artistic license shown in Burton's Ed Wood. Consider the record set straight.

He Was a Quiet Man is another film from my Oscar pool win, but this time, it's the kind of thing I might have purchased for myself. Frank Cappello's low-budget quirk of a film about a man about to go postal in an office building (Christian Slater made ordinary-looking) benefits from the director's background as a special effects man. And while some of those effects are done on the cheap, they're sold by the film being highly subjective. Is all this happening? How much of it is real, and how much carried by anxieties or hopes? Visual inventiveness and melodrama go hand in hand and reach a rather poignant climax. A small, but worthy indy picture. The DVD includes an entertaining director's commentary on both the film and its deleted scenes (which include two alternate endings). The making of featurette is a bit longer than a Hollywood featurette, but not that much more useful.

The massacre of the Aztecs done with horned toads and frogs. A mechanical vagina giving birth to a smaller version of itself. Rock and roll machine guns. Just some of the strange and often shocking images in Alejandro Jodorowsky's The Holy Mountain. Undoubtledy his masterpiece, don't expect a straightforward story. On the surface, it is a man's quest for enlightenment, and an indictment of our unenlightened society. But Jodorowsky uses film in a poetic, or in this case, allegorical way, not in a prosaic one. His usual tropes - near constant nudity, amputee actors, and taboo imagery - are all present, laced with symbolism from every mystical tradition. While I'm sure I'd have understood more if I'd been a Kabbalist or something, I'm rather happy with my interpretation, which didn't jar much at all from those nuggets Jodorowsky gives on his commentary track (in Spanish, with subtitles). Even just as a visual experience, it is a clever piece of work, with more things you've never seen before in the first 5 minutes than in any other film ever made. In addition to the excellent director's commentary (which explains some images, but also describes some wild production stories), Jodorowsky lends his voice to a few deleted scenes and an insightful discussion of the Tarot. There's a short feature on the DVD restoration process and a small collection of pictures and script pages (in Spanish). As with El Topo, the entire soundtrack is included as a separate disc on the boxed set collection (72 minutes of varied music, some of it quite good).

ut KFF selection, Benny Chan's Shaolin, is an epic story set at the turn of the last century, in which a defeated warlord who loses everything (Andy Lau) becomes a Shaolin monk and ends up defending the temple from the forces of evil (essentially, people with guns). Nicholas Tse and Wu Jing also star, and Jackie Chan, billed as a "special appearance", does a lot more than expected (even fight a little, though it's his lovable character that makes this so memorable an appearance). Benny Chan is known for a lot of slam-bang Jackie Chan movies in the Police Story mold, and those origins are obvious. Though this is a period piece, there are the equivalent of car chases, emo baddies, and gun fu action. It even ends in absurd and unmotivated pyrotechnics. So it's a good thing the A-story is about Andy Lau, because that man can do no wrong. Everyone but the over-the-top Tse do such a solid, touching job, that it's easy to forgive the film's excesses. I know there's a 2-disc version with making of material, but my 1-disc edition at least has 45 minutes of deleted scenes, restoring a lot of material about either the Shaolin monk Robin Hoods or people's reactions to Andy Lau joining the order. To be frank, I'd have happily lost a couple of action scenes to see many of these in the film itself. So touching. But of course, the film already feels bloated at 131 minutes. 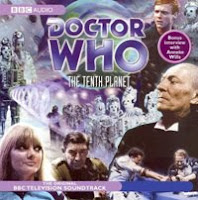 udio: I finished listening to The Tenth Planet on CD, a story whose only missing episode is the last. Doing the whole story on narrated audio (that narration by Anneke "Polly" Wills) seems like overdoing it, but how else is it going to establish a context for that last ep? Anyway, I can't wait for 2|entertain to give this story the DVD treatment, as it is the first appearance of the Cybermen (which sound very alien on audio) and the last story for William Hartnell's Doctor (the highlight of the disc... at once sad and frightening). As far as the story itself goes, there's a lot of talking (American accents may grate on some) thanks to a large cast of characters) so relatively little of Wills' somewhat stone-faced narration. Ben gets to carry the serial, which is good for any companion. Polly makes coffee (well, that was her shtick, wasn't it?). And it ultimately falls a little apart as the Cyber-planet melts away and the Cybermen self-destruct. All a bit pat, maybe it's why you don't remember it happening in 1984. So I'm putting my first missing Troughton in the CD player next...

Theater: Yes, I go to the theater, but only when a friend of mine is in the play. Cul-de-Sac - text by Nova Scotian playwright Daniel MacIvor, as translated into French (same title though) by Fanny Britt - is an impressive one-man play (what happens when all but one drama student in any given year finally gives up on the Dream) in which my friend and neighbor Ludger Beaulieu played no fewer than 9 characters, 8 of them in the same maverick scene at some point, and he did a great job. Give this kid some work! Cul-de-Sac is an edgy, irreverent, funny, intense, dramatic piece that centers around a controversial murder, while savagely attacking social mores. Also, best use of Jingle Cats ever. It's 100 continuous minutes in the company of a single actor. I would have been impressed if all Ludger had done was learn that incredibly convoluted and energetic text by heart. Of course, he did a lot more and, as they say, left it all on the stage.

snell said…
Yes, I watched Hamlet 2, and was ready to write it down as "close but no cigar," but damn if the play within the movie wasn't surprisingly touching. Plus, just try to get Rock Me Sexy Jesus out of your head...
December 11, 2011 at 4:32 PM

Randal said…
I was on the tipping point either way with Hamlet 2, but for some reason the Jeremy Irons impression at the end put me on the negative side...it just felt like one if those, "I do a pretty good Jeremy irons voice, shoehorn it in there for me." Just a totally random thing that soured it for me. I'll stick with Tristram Shandy.
December 11, 2011 at 8:25 PM

SallyP said…
Well, I loved Green Lantern, but in my case, that's pretty much a given. Sinestro was awfully fabulous though.
December 12, 2011 at 5:15 PM