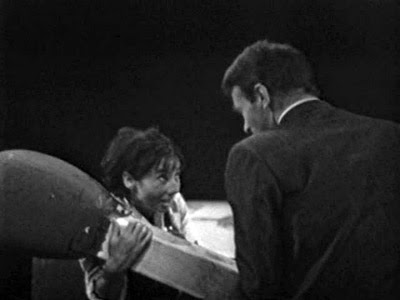 IN THIS ONE... Our heroes cause an explosion and telephone trouble to get the police involved, then head for the TARDIS to get it back to the proper size.

REVIEW: If this episode is a bit weird, it's because it was edited down from two episodes due to production problems (one of which, I dare surmise, was to avoid showing an upsetting dead kitty to young viewers). That's why it's "filmy" (it had to be transferred to that format for easier editing) and why it seems so disjointed at times. I'm sure it helped remove any longueurs, but it's entirely TOO tight. Things happen too quickly, we catch the end of conversations or miss them entirely, and it makes some of the characters decisions come out of nowhere. And yet, we get all that business with the giant phone and a longish scene in the TARDIS, trims to which might have helped the final product breathe a little.

Barbara's poisoning is finally revealed and still she doesn't want to make a fuss, which is wonderfully British of her, and our heroes continue to interact with giant props. However, there's a futility to what they do that makes it all rather pointless. They manage to unhook a phone, somehow alerting a meddling operator, but she was already on Forester's trail thanks to an earlier call during which she correctly noticed "Farrow"'s lack of whistling lisp (so there was a point to that after all). Whatever the town this takes place in, it's lucky the operator not only knows everyone by voice, but shares a cubicle with a policeman. I'm not saying it's not possible and so far as I know, this was common practice 50 years ago, and the unhooked phone gag would have worked. Still, Forester seemed well on his way to getting himself arrested all by his lonesome. Likewise, the scientist Smithers figures out for himself that his insecticide is too deadly (maybe the dead cat justified his sudden realization, had it remained in the episode), causing Forester to pull out his ridiculously tiny gun on him. And then there's the home-made bomb the TARDISeers make by lighting up a can of insecticide. Ignoring the fact that this would be doubly dangerous at their size (the stuff is poison, right?), the cops were already on their way and the explosion had nothing to do with it. Though of course it gives Forester a bit of a burn. I don't have a problem with there being nothing the heroes can do at that size, but I do have a problem with it all being written as if they HAD done something when in fact, they had not.

Even though a number of decisions seem to occur off-screen, as does the journey back to the TARDIS (like I said, these can be jarring), there was really no time allowed for the Doctor to fix the busted scanner in the TARDIS. So it's perhaps even less of a cliffhanger when it's on the blink at the end of the episode. Yes, we're asked to come back next week to see if the Doctor can fix the vertical hold on his tv. Considering what comes next, the cliffhanger really sells it short.

VERSIONS: So what was cut from episodes 3 and 4 to make it fit a single time slot? The cat drinks contaminated water and dies; the crew decide to put the fate of the Earth's ecology above Barbara's life; the Doctor says there are no antidotes in the TARDIS; Ian and Barbara get a puff of Forester's cigarette; the nosy operator wonders about the strange car at Farrow's and discusses his smoking habits; Smithers figures out what Farrow's report said; and Forester says he put Farrow's body on the trunk of the car. Most of these were restored in the Target novelization.

2017 update: The DVD includes a reconstruction of episodes 3 and 4 as they were meant to be broadcast using film clips, dubs (Ford and Russell play their own characters at least), and some CG (the bits with the dead cat, mostly). They go from the shooting script because the unedited episodes themselves are long gone. Though I knew what was cut, the effect of seeing everything put back does elevate the back half of Planet of Giants. In addition to linking material and clarity, the edit makes the criminal plan more nefarious, Smitters more sympathetic (a dupe rather than a willing accomplice), and the policeman and operator an actual functioning couple and folksy detectives. More importantly, the stakes are better spelled out, and rather than simply surviving a strange environment, the TARDIS crew make it their mission to prevent the insecticide from being released with rather more important consequences than we understood. Episode 3, Crisis, would probably still get a Medium-Low, compounding the slow telephone beat with a long sequence deciphering Smitters' notes (and the tonal ickiness of the dead cat). Episode 4, which would have been called The Urge to Live, is stronger and more exciting, and would have gotten a Medium.

REWATCHABILITY: Medium-Low - While the story survives the editing, it's still a jagged viewing experience, and our heroes are made redundant by the activities of the town operator.

STORY REWATCHABILITY: Medium - An amusing fluff piece, perhaps not the best choice for a season opener (I don't know how much of that factored into things back in the day), but still relatively entertaining thanks to the production design and the regulars. The Doctor is mellowing out nicely as well. Less successful is the upscale story - a potentially worthy eco-fable turned into a weak cop show of the week. Even if the reconstructions are a little awkward, they're still the better version and mitigate most of the flaws.
Doctor Who

Matthew Turnage said…
My understanding is that the reason for the editing was not so much to do with any production issues, but to get to the Daleks as soon as possible. As I understand it, Sidney Newman really wanted to lead of Season 2 with the Dalek Invasion of Earth, but couldn't swap the broadcast order because (SPOILER FROM 1964) of Susan's departure at the end of that story. He decided the next best thing was to trim Planet of Giants from 4 to 3 parts to get the Daleks on screen sooner.
January 6, 2012 at 3:39 PM

Siskoid said…
I've read a number of reasons for it, but that's as reasonable as any.

Matthew Turnage said…
Yes, that spoiler warning was tongue in cheek. I'm looking forward to your take on the next story. Personally, I mostly enjoy it but I have some mixed feelings about it. I'm interested in comparing notes.
January 6, 2012 at 4:08 PM

Toby'c said…
Did you watch the reconstruction of the last two episodes on the DVD release?
November 12, 2012 at 5:25 AM