Doctor Who #49: The End of Tomorrow

January 10, 2012
"A new start? Rebuilding a planet from the very beginning. It’s a wonderful idea!" 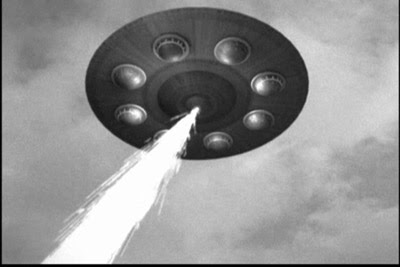 IN THIS ONE... Barbara and Jenny escape by truck. Susan and David escape by sewer. And Ian meets the black marketeer Ashton and the Daleks' pet Slyther.

REVIEW: Behind the scenes, William Hartnell injured himself so the episode was hastily rewritten to give him a break. The in-story solution isn't at all convincing, I'm afraid. Basically, David convinces Susan to leave the old man behind (she wouldn't have been) because he'll be safe (but somehow they won't) and they've got to move (but somehow the Doctor doesn't). After a dangerous journey through London's sewers, they poke their heads out again and the Doctor's managed to get to the same place they have. It's not just that the Doctor's been written out, but that Susan and David (and Tyler who joins them) have essentially been written out of any meaningful plot too. Shaky ladders, menacing gunmen who turn out to be friends, and "alligator" stock footage (aww, it's just a baby!)... it's all just a diversion. The only Dalek-related menace they face is the firebomb, and though the Doctor's there, David is left to disarm it alone. The sequence is a bit better on a character development basis - Susan and David grow closer, and she shows keen interest in rebuilding a world from scratch. I'm well-known for taking on impossibly long-term projects, but that's all very Time Lord of her.

Meanwhile, Ian's up in Bedfordshire, thinking of going back to London (not more crossing each other in the night, please!), where the Daleks have a slave force working the mine. Lots of extras and numerous camera angles tell me director Richard Martin would rather be shooting everything on film. All the film stuff has been rather excellent (Dortmun's corpse, huge in the frame as Barbara and Jenny pull away is another example), while the in-studio video material has been far more uneven. The mining stock footage does call attention to itself, however. So when we're in or around the earth mover, it soon gets a bit stale. The Robomen REALLY shouldn't be getting lines, because when they speak, the story... just... stops. Even the Daleks's speech patterns have been getting more and more halting since the first episode. For some reason, the Daleks aren't monsters ENOUGH, so we have the Slyther, a pet of the Black Dalek's (marking the first mention of these Dalek leaders), that,s not entirely successful. The camera doesn't linger on it too much, but it looks like a pile of rubber, maybe some kind of plant, with pincers and things. All it really does is cut down the scene with Ashton the black marketeer and kill what could have been an interesting villain. Here's a man who's profiting from the invasion, helping humanity to help himself, but we're not allowed to go into that gray territory, not in a sci-fi story.

As has become more and more frequent, it's up to Jacqueline Hill's Barbara to save the episode. Though we can, of course, sneer at the idea that a museum would keep fully-fueled vehicles on display (it's a Resistance hang-out, so why not say it was part of a contingency plan, Mr. Nation?), Barbara and Jenny's wild ride through a Dalek patrol is genuinely thrilling. Who doesn't love destroying Daleks? And it's not all action. When Jenny's pragmatism doesn't allow for romanticism, Barbara slaps her down hard about the power of hope. I continue to wonder what the TARDIS crew dynamic would have been with Jenny aboard. She can leave the pointy hat at home though, thank you very much.

VERSIONS: The DVD's enhanced effects option gives us a much better shot of the saucer zapping Barbara's truck, and glowy motivation for it to explode.

REWATCHABILITY: Medium - In the rush to write out the Doctor, they threw out any kind of purposeful plot. It's a good thing Barbara runs over a Dalek, because it's otherwise a huge dip in what's been a stellar serial.
Doctor Who