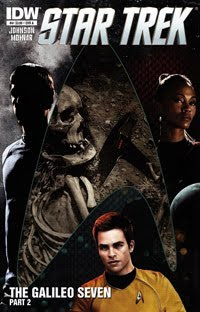 PLOT: As ape-like Taureans attack the Galileo shuttle, Scotty manages to get the ship working on low power to escape from them. Back on the Enterprise, Uhura steals a shuttle to rescue Spock, which Kirk uses as an excuse to go back to Taurus II, seeing as he's lost most of his senior staff.

DIVERGENCES: See previous issue (Yeoman Rand). Other divergences are a result of the J.J. Abrams continuity.

PANEL OF THE DAY - Apes: Comics' bread and butter. 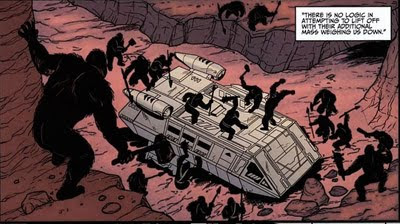 REVIEW: I'd like to think criticism like the one found in these pages has led to this series diverging more from the original canon in future issues, but I'm not holding my breath. Part 2 of The Galileo Seven is quite divergent, however, as with the second part of Where No Man Has Gone Before, Mike Johnson has predicated the changes on what's actually different in the Abrams continuity - namely, that Spock and Uhura are in a relationship. (Also, that girls can do as much as boys now that we're out of the 1960s.) There's a well-played, meaningful look between Kirk and Uhura when the captain gets ordered to leave the Galileo crew behind. At first, you think Kirk's just apologizing for what's about to happen. In retrospect, they were silently hatching a plan. There's a nice speech from Kirk about why his crew must come first, and a sweet ending with Spock and Uhura confined to shared quarters. Shippers rejoice! The Taureans get the promised make-over, though they're still ape-like. It's fun to see the action outside the shuttle the original episode denied us. My one complaint is that Yeoman Rand's presence doesn't add anything after all. Is she a plant to prepare the next movie? Or will she actually get to do something? The next issue retells Operation: Annihilate!, so not immediately, no. If it'd been Miri or The Enemy Within...
Comics Star Trek Star Trek Comics

snell said…
You know, I could buy some residual telepathic link between the lovers--but at least give me a damned line of dialogue to establish it!! (Especially since the whole crux of the original episode was "how can we let them know where we are." According the this new version, the old version crew just didn't look very well...)
January 10, 2012 at 12:28 AM

Siskoid said…
Or maybe something as simple as detecting their power signature now that the shuttle was back up and running.
January 10, 2012 at 7:15 AM

Anonymous said…
Yeah, it would have been nice to add a line of dialogue to let us know just how Uhura found them. But maybe they are saving that for a later issue, or maybe even the movie. I like snell's explanation of her finding the power signature..although the telepathic link may be a possibility as well. In any case--I really like this issue.
January 13, 2012 at 3:34 AM