I spent a bit of coin on an Amazon Boxing Day sale, and my neighbors saw the parcel in my mailbox, but it wasn't there when I got home. Amazon will replace the apparent theft, but that leaves fewer acquisitions this week. Just two Doctor Who DVDs - Invasion of the Dinosaurs and The Android Invasion - and a couple of How I Met Your Mother novelty books from the desk of Barney Stinson.

DVDs: Steven Soderbergh's The Limey has a simple revenge story - a Cockney father just out of prison comes to America to find his daughter's killer - but it's infinitely more interesting than that thanks to perspicacious casting and bravura editing. First, it's really a movie about the 60s and how its ideals have failed. Many of the actors are icons from the 60s and 70s, taking their personae to their logical conclusions. Terence Stamp and Peter Fonda are particularly good, but I can't fault anyone in the cast. In true indy film tradition, every character has his or her eccentricities, begging questions that aren't answered. Through a kind of fractured editing, the film acts as a memory, revealing information in non-linear fashion, and I love that. It even uses scenes from an early Stamp movie in flashback fashion, and seamlessly at that. The resulting confusion never lasts and actually ramps up the tension. I can't believe this movie isn't better known. The DVD has two unusual commentary tracks. The first takes its cue from the editing, at times fracturing the conversation between Soderbergh and screenwriter Lem Dobbs, and it's a very honest one, as the latter really goes after the former's choices. The second is edited from interviews with the actors (mostly) discussing the 60s, their careers, their philosophy of life, their characters and the movie. It takes the place of a usual making of and is never uninteresting.

Our Kung Fu Friday selection was Flying Guillotine AKA all sorts of things, possibly Master of the Killer Hats (!), but not to be confused with Master of the Flying Guillotine (it's a confusing nomenclature - even the cover art seems to be from another movie), a Shaw Brothers classic about assassins who use a throwable hat that chops off heads. Now, there's a lot of training with this thing, so the first half is over-long, but it gets better when one of the assassins (Kuan Tai Chen) runs off because the Emperor has just gone too far. They track him down, but can they kill him and his dissident singer of a wife (her songs are awesome)? It resolves satisfyingly (and uses a LOT of cool outdoor sets), though the Emperor gets away scott free. Boo History! However, I can't say the movie convinced me the flying guillotines are anything other than "flawed" (at best). 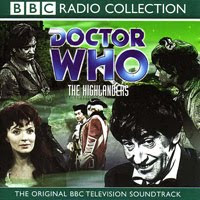 Audios: If wiping Power of the Daleks is the BBC's greatest crime against Doctor Who, wiping The Highlanders might just be the second greatest. Not only is it the introduction to one of the longest-running companions, Jamie McCrimmon (though a bit under the wire), and the last true historical (RIP, I loved you best of all), but it's also a wonderful comic turn for Troughton's second Doctor. Think about it: We don't get a surviving episode until The Underwater Menace episode 3 (and soon, episode 2), and that thing is outrageous B-movie madness. The first two stories were infinitely better, and The Highlanders, for its part, has the Doctor adopting various disguises (including the first, but not last, instance of Doctor drag) to great effect. Polly and Ben get a lot to do, and Polly is strong and sassy. I just love how she intimidates Ffinch with a mix of feminine wiles and good, old-fashioned emasculation. Frazier Hines (Jamie) is an excellent narrator, handly the action with the right touch of excitement. 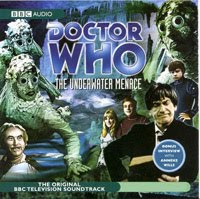 The Underwater Menace, quite simply, a B-movie on crack. It takes place in (future) 1970s Atlantis where a mad scientist at odds with cult leaders means to blow up ze Earth for fun. I haven't seen the newly recovered episode 2, but episode 3 is pretty garish, so the story really benefits from the audio-only treatment (with narration by Anneke Wills). Certainly, the Atlantis we might imagine in our heads, and its climactic flooding, are much more epic, and the fish strike loses its longueurs. It's still B-movie madness, but it's fun and even exciting as Trougthon's Doctor improvises around religious and scientific leaders. It will never be one of the great stories, not with that half-assed plot, but it can be enjoyed as a piece of high camp. In the Lost Episodes vol.3 set, this story has the special bonus disc with all the extras. There's a documentary on the music of Doctor Who, which is pretty great and manages to speak to a lot of surviving composers. I never realized the challenges of making music for tv in the 60s before this. The other feature is an interview with Anneke "Polly" Wills about her time on the program and her rediscovery of these stories through her work on the audio series. What a charming lady, and it all feels very fresh because she's not featured on very many DVDs seeing as most of her tenure is still in the Lost category. If you were getting these audios separately, based on interest, you might not think of getting The Underwater Menace. The bonus disc is worth getting it regardless.

De said…
Oh that sucks rocks about the theft. For a while, I had to have parcels delivered to my office after an experience similar to yours.
January 15, 2012 at 2:56 PM