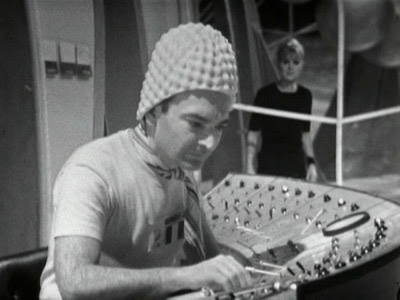 TECHNICAL SPECS: The other surviving episode of this story, to be found on the Lost in Time DVD. First aired Mar.4 1967.

IN THIS ONE... The Cybermen are thrown into space by the Gravitron.

REVIEW: Wow, there are eleven Cybermen bearing down on the Moonbase, which is an enormous army in those pre-crowd duplication days. Plus, an artillery kit that fires an animated laser beam! You can, I think, pretty much excuse lapses in other aspects of the special effects, including the all-too spongy lunar soil (though I do like the advancing feet) and the fact there's an important disconnect between the base's interior and model exterior. This is our chance to actually see some of the visual ideas introduced in the previous episode, and naturally, some work better than others. For example, the Cybermen's psychedelic communications console is cool and trippy, and the converted Cyber-drones have some crazzzzzy hair. I've also noted there's a good reason for the future to be filled with so many pale walls - it's so the Doctor's dark figure stands out against them. The contrast was never this high back when the Doctor had white hair.

Of course, the story continues to offer some real head-scratching moments, both in terms of script and staging. The base crew must be very dense indeed if they can't see one of the drones walking among them and getting into the Graviton room! Hobson is particularly slow, exclaiming his "of course" long after a situation's been satisfactorily explained to the audience. Try to keep up, big guy. Patrick Barr gets some humor out of the part, but the script makes him irredeemably incompetent as the base's commander. So the characters are called on to make mistakes because they must, but the final solution isn't much better. I totally accept the use of the Graviton to shoot the Cybermen and their ships into space - cartoon sounds aside - but the notion floated (ha!) last episode that gravity was a particular weakness, preventing them from entering the Graviton control room, and... what, making them more susceptible to being flung out into space? That thread just doesn't track. On the subject of nonsense, I might also mention the time scanner at the end, a piece of kit that is never really used again and basically spoils elements of the next story for no other reason than to create a cliffhanger. Less of that, please.

It's not all bad though. While we might question to force of the dome's explosive decompression, it's funny to me that Polly's coffee-making skills once again save the day (via the tray). Ben and Jamie cooperate by ramming something into a Cyber-drone (hey, what happens to the "sleeper agents" after the Cybermen leave?). And the Doctor stands his ground bravely as the Cybermen fire on the base while everyone else ducks for cover. He realizes it wouldn't really matter, and it's fun to see him get a little weak in the knees when the moment of danger passes. The fate of the rescue rocket's screw, flying slowly headlong into the sun is nothing short of terrifying even if we don't see it. And then there's the joyous celebration at the end, which feels rather new to the program. Usually, the characters left behind have either been trapped in tumultuous events (many historicals), are seeing to their casualties, or at best, give bittersweet farewells to the TARDIS crew. I don't remember the last time an episode has ended on such high energy. The new Doctor's mission may have something to do with. Hartnell's was so often just running from events, the show just wasn't focused on providing a proper victory over the forces of evil. Now that the Doctor is fighting evil, we're allowed to revel in their defeat.

VERSIONS: The Target novelization is called "Doctor Who and the Cybermen" and features a later Cyberman model on two of its three covers. It also makes Telos the Cyberman homeworld instead of Mondas.

REWATCHABILITY: Medium - If Doctor Who is going to do camp SF, I'd rather have it be like this than The Underwater Menace's finale, i.e. pleasant nonsense devoid of lurid sadism.

STORY REWATCHABILITY: Medium - The Cybermen return to the program in a better, if more generic, form and will become the second Doctor's greatest foe. Let's just hope their future appearances will enjoy a stronger script.
Doctor Who

Siskoid said…
Nope. I'm making a list and that thing isn't on it.