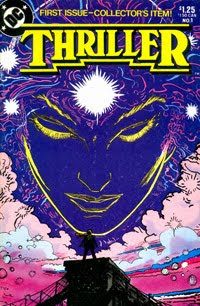 When it was new: Running for 12 issues in 1983 and 1984, Thriller is the creation of writer Robert Loren Fleming and artist Trevor Von Eeden, though both ended up leaving the book. Fleming left after 7 issues due to "creative differences" to be replaced by Bill Dubay, and Von Eeden left after 8 to work on another project, and replaced by Alex Nino. The book was cancelled due to poor sales.

Premise: That's a hard one to summarize... Set 50 years from now, this pulp/superheroes mish-mash features Angeline Thriller, a disembodied oracle who assembles a team, the Seven Seconds, to fight terrorism. The team includes a synthetic priest, a man with changeable skin, a pilot with acupuncture fingers, a genius who never leaves his car, a Honduran pickpocket, Angeline's brother, a superhuman marksman who has given up on killing, and a new recruit who has just lost his brother to the terrorist Scabbard. The Shadow meets the Doom Patrol, essentially. It has never been collected.

Thrills and spills: There's something immediately, well, thrilling about how experimental and modern Thriller is, but it's not an easy read. Fleming uses the then-new first person narration captions and no thought bubbles or omniscient narration, and structures the work less than chronologically. Meanwhile, Von Eeden's expressionistic style is given free reign, filling the page with unusual panels and scratchy character work. The letters pages, for their part, are filled with comments about how opaque the story and that it's somehow the series' biggest asset. Presumably, the letter hacks were among the few who embraced the confusion, which made the book flounder sales-wise. The flexographic coloring doesn't help Von Eeden' art either - it really needs a more subtle color palette - and it seems that Dick Giordano came on to ink the work on a couple of issues only to clear up the art. And yet, I agree with the letter hacks. There's something to Thriller, even if it is a case of style over substance. Read all in one go, the story's really not that difficult to make out, you just have to pay attention, and Von Eeden is always interesting even if it may not be your bag. 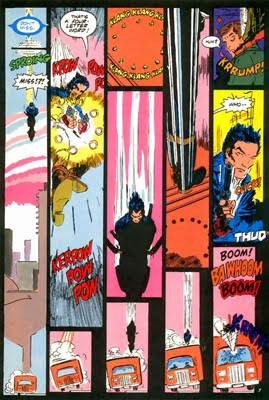 The characters are almost entirely slick and cool, with very strange powers that seem fueled by Buddhism more than anything else. Just getting to find out about them and about this parallel future, is worth the price of admission (at least, in the first 8 issues). All I ever knew of the series before I read it this week is that it had an entry in Who's Who and that Scabbard had appeared in the Giffen/Fleming Ambush Bug #4. He's the focus of the first arc, presented as a satanic terrorist operating in the Middle East. There's enough strangeness in the characters and story telling that this is a fairly straightforward mission for the team. As the series progresses, it gets stranger. A clone of Elvis-in-all-but-name committing crimes. A sentient Internet who wants to die before the Russians use it against America. A nuclear strike on New York that's undone to provide a miracle that will advance society to the next step. And throughout, subplots that explore mysteries surrounding the various characters.

After Fleming and Von Eeden leave, the book becomes entirely more traditional and those issues seem dated as a consequence. It's not the art by Alex Nino, whose style isn't far off from Walt Simonson's, though his panel structures are certainly less experimental (and he's really not as inventive at portraying the various powers and skills). No, it's Bill Dubay's writing, which info-dumps huge amounts of information in purple prosed third-person narration or dialog. Though he has Thriller's brother forced to kill against his will again and again - a worthy character arc - his pacing is off, such as when he has someone announce they have 7 minutes to live, and then jumps into a long sequence that looks at various characters' origin stories. I don't know if he was working from the series bible at that point or trying to inject his own ideas into the work, but ironically, I found it much more confusing that Fleming's issues. The revelations came quick and dirty, and read like Days of Our Lives on acid, and not in a good way. To his credit, he still keeps things slightly surreal and wholly messianic, but the book is now feels dumb down and yet still opaque. At least in the early issues you could see it as a puzzle, open to interpretation. Under Dubay, the book is still a head scratcher, but it's all interpreted for you.

Sadly, before it was cancelled, Fleming and Giffen were planning to do a Special. The stuff that only exists in Borges' or the Dreaming's libraries, eh?

Trade in for one of the New52? The book was too troubled for me to have a coherent opinion about it. The first 8 issues are promising, and certainly the characters are worthy, but the last 4 destroy some of my good will. The ending would have allowed for future stories that never came. I wouldn't mind a revival, though I quake to imagine the recap at the front of THAT book.
Comics Old52

Michel Fiffe said…
It's unlikely that this will ever get rebooted, but with titles like Night Force around, can this one really be far behind?

As much as I like Thriller, I never thought Alex Niño got a fair shake in this. His Thriller stuff seemed like he was called in at the 11th hour in order to fill the "weird, off-model artist" slot. I dunno, I think it all looked pretty cool, but nothing beats those first 4 issues.
May 31, 2012 at 9:10 AM

Siskoid said…
A slim Showcase Presents, without the colors might actually look better and be relatively cheap for DC. However, there has to be a call for it, say if Fleming had some kind of recent hit.
May 31, 2012 at 9:13 AM

Michel Fiffe said…
Black & white reproductions would be neat to see, but I quite like Ziuko's coloring, actually. The occasional garishness works to build the mood of the world, which set it apart even more.

As for Fleming, he dropped out of writing comics for nearly a decade only to resurface in 2008 to write the latest Ambush Bug mini. Johnny B would know the specifics, he's got this Thriller thing down, believe it!
May 31, 2012 at 1:16 PM

Wayne Allen Sallee said…
I really did enjoy this book. This might have been the first time that I said that I would read anything a certain writer(in this case, Loren Fleming) wrote. If I'm not mistaken, a big thing was made of Von Eeden being in his late teens when he got this job. The next time I got excited over a writer was when James Owsley started writing as Christopher Priest.
May 31, 2012 at 4:50 PM

Wayne Allen Sallee said…
Indeed I did, Siskoid. I enjoyed TRIUMPH and Priest's run on JL TASK FORCE. I'm in the minority on Triumph, but a lesser writer would have made him completely forgettable.
May 31, 2012 at 7:05 PM