June 26, 2012
To my surprise, DC's spy character King Faraday appears in Adventure 483's second story. His career must be on the wane if he's dealing with endangered animals and poachers... And because I know those who follow this series really want to know what bully Brad is up to after he runs away in the wake of his parents' divorce, well, he might be joining a gang so long as they don't force him to take up smoking. Also: B'WANA BEAST REFERENCE ALERT! 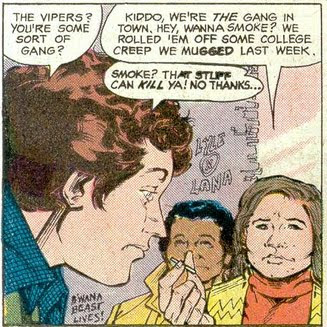 You're all caught up. Let's take a look at YOUR characters and how they might be best integrated into the DCU.

Case 29: Adventure Comics #483
Dial Holders: Chris and Vicki
Dial Type: Watch and Pendant Dials
Dialing: Vicki dials up an identity just to train herself, even if each identity has different abilities. It's not as crazy as it sounds, because the Wildebeest notices their poor fighting tactics. Vicki also floats the idea that Fairfax's superheroes are in a kind of club together whose members can fob off missions to one another. We'll see if the authorities buy it over time. 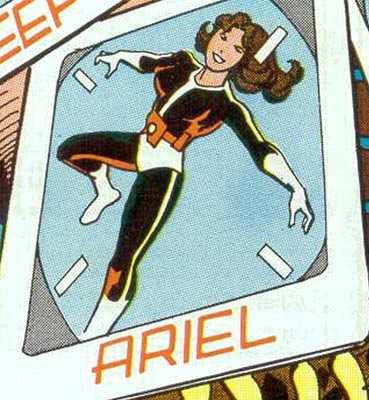 Name: Ariel (Kitty Pryde didn't hold on to it, so it's fair game)
Created by: Francisco Garcia, Age 14, from Salem, OR
Costume: A pleasant red and white number with lines running down the arms and legs. A bit nondescript, and then you have some large pouches or clasps on the belt that I'm not sure serve any purpose.
Powers: Ariel has energy powers and can fly... "like that fairy in Shakespeare's play". I'm not sure I remember the energy blasts in The Tempest, but I haven't read it in a long while.
Sighted: Near Fairfax, trained against Gladiator, fought the Wildebeest, and met King Faraday.
Possibilities: The Shakespeare connection should be explored, perhaps having Ariel (who I'm sure appeared in Sandman) play Abin Sur to a human Ariel. Unfortunately, nothing but the name screams out Fairy Land.
Integration Quotient: 10% (woefully generic in almost every way) 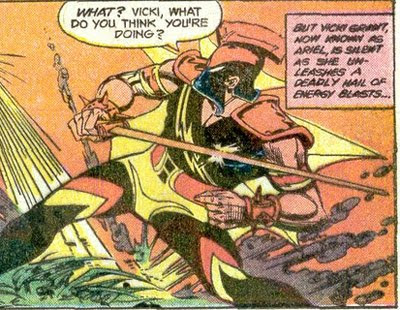 Name: Gladiator (I think Marvel has dibs, twice over)
Created by: Jeff Zonder, Age 11, Erica Zonder, Age 10, Josh Gubkin, Age 10, and Jenny Gubkin, Age 7, from Farmingham Hills, MI (a character created by committee?! Unheard of!)
Costume: The red, black and gold armor gets more sleek and modern as we get away from the upper body, which features a broom-brush helmet, metal shoulder guards and spiked bracers. His sash looks like a lightning bolt and he wears a strange diaphanous caplet in the stiff shape of a starburst. His "power sword" is a deeper shade of gold. Striking if baroque.
Powers: Gladiator is a fair fighter who relies on a magical power sword that can absorb energy flung at him.
Sighted: Near Fairfax, trained against Ariel, fought the Wildebeest, and met King Faraday.
Possibilities: How about playing on DC's historical characters and making him a descendent of the Golden Gladiator? Keep him in Italy, a country that surely needs superheroes.
Integration Quotient: 15% (keeping him out of the public eye and the continental U.S. might keep the Marvel villain and Imperial Guard's lawyers at bay) 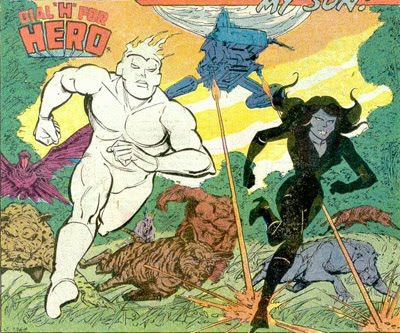 Name: Black and White (cool name for a duo)
Created by: Wayne Hastings, Age 13, from Cantoment, FL
Costume: Full body suits in stark black or white, they both have boots and probably gloves of the same color. White's face is just as white as his costume, and his hair looks like white flame. Black's dark gray face is framed by flowing black hair.
Powers: White fires a white beam of light from his face. Black fires a similar black beam from hers. Both are harmless alone, but when they cross, they have destructive power. Awfully impractical.
Sighted: Near Fairfax, routing the Wildebeest and preventing him from capturing a black-footed ferret.
Possibilities: If someone could bolster their powers, Black and White could become the DCU's Cloak and Dagger. Symbiosis is fine, but they've got to do more than fire half an energy blast. If they could get enough traction to get a mini-series, it would have to be in glorious black and white.
Integration Quotient: 7% (it's all based on the name, because the powers are the pits)
Bonus Supervillain 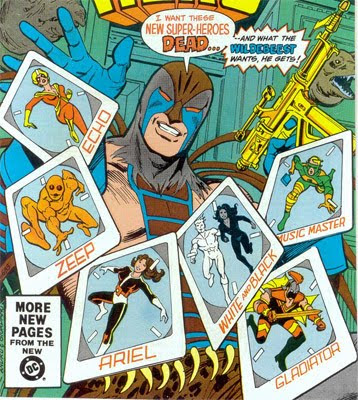 Name: The Wildebeest (DC already has a Teen Titan by that name... Marv Wolfman, you sneak)
Created by: John Herbert, Age 15, from Wynentskill, NY
Costume: The Wildebeest wears brown and gray animal skins, and a mask of the same colors gives him a beak-like nose. A red bandolier joins the neck to the waist, red claw marks are on his thighs, and six long quills arc out of his back like skeleton wings.
Powers: He's a great hunter, tracker, strongman, acrobat, marksman, pilot and fighter. The Wildebeest equipment includes a tranquilizer rifle that can take down a rhino, a silent helicopter, and a staffed private jet.
Sighted: All around the world, from Kenya to Tazmania, capturing the last examples of endangered species to hold them at ransom for big bucks. In Fairfax's nature preserve, fought two separate superhero duos while trying to get a prized ferret. Escaped and led agent King Faraday to his secret zoo.
Possibilities: Two possible paths - full-on Kraven clone, or Wildebeest Society connection. Of course, you could follow both. They DO know that the animal of that name isn't exactly a hunter, right?
Integration Quotient: 35% (takes a little work to get him into a universe where there are other Wildebeests, but not much... I'd be more worried about the mixed metaphor)

Anonymous said…
so satisfying to read a critical and humorous review of the character we created - the Gladiator - decades later. Even better than the "I dialed "H" for hero t-shirts that we won along with the character being chosen.
August 4, 2012 at 1:27 AM

C_Oliver said…
I was about the same age as Jeff & Erica Zonder when these were published. I enjoyed the issues at the time, am pleased at how much I remember of them, over 30 years on -- and am pleasantly surprised to read the comment of a fellow fan who succeeded (I didn't!) in getting their character chosen.
June 7, 2013 at 6:33 AM

Josh said…
Here's the scoop on Gladiator... Jeff created him. Originally, he was a black superhero with blue and black costume, from what I recall. Several submissions were made by "the committee" made up of four kids. I still have my copy of this comic book and am very proud to have been a part of it. (BTW - DC mixed up the ages of Jenny and Josh.)
Yours truly,
Josh
January 16, 2014 at 8:16 PM

Siskoid said…
I love love love hearing from these heroes' designers! Thanks for chiming in Josh!
January 16, 2014 at 8:21 PM