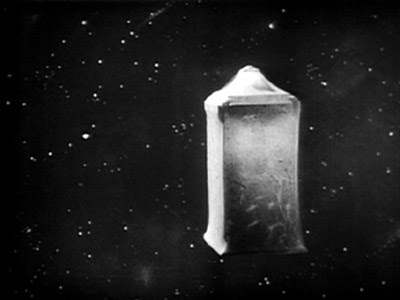 TECHNICAL SPECS: Originally, the only existing episode from this 6-part serial, it could be found on the Lost in Time DVD. It now has its own dedicated DVD, featured 4 other recently-found episodes. First aired Feb.3 1968.

IN THIS ONE... The TARDIS gets webbed up by an unknown entity, then lands in the London underground, but it's full of Yeti!
REVIEW: The Yeti are back and their make-over (which surprisingly, happens before your very eyes) may make them cuter than ever! If robot Yeti fighting Tibetan monks on behalf of a Lovecraftian intelligence was strange, their creators Haisman and Lincoln just pile on more weirdness in the sequel. The Yeti are now in the London underground, and they use web-guns to gunk stuff up. A bit anything goes in true Whovian fashion. It's a bit unfortunate that the Yeti are now beeping just like their naked control spheres, a sound I find incredibly annoying, but they are otherwise more effective as lumbering monsters than their Tibetan cousins. Travers is back too, but he's much older, forgetful and clearly losing it. His mind was touched by the Great Intelligence, and it seems you don't walk away from that unharmed. It's all so very Lovecraft, enjoyably so.

It also helps the atmosphere that so much of the episode is shot on film, and director Douglas Camfield does a lot with the lighting in those scenes. Flickering light, heavy shadows, eerie music, they all contribute to a Hammer Horror mood whether we're in the candlelit museum or the subway tunnels underneath London. They throw in cobwebbed cadavers for good measure, and a silent, evacuated London. It's The War Machines, but the TARDIS landed too late to prevent our own contemporary world to fall at the hands of the monsters. That is perhaps the point of webbing up the TARDIS, suspending it mid-landing. It would have normally arrived in time to stop whatever disaster has occurred, but the delay, in space-time values, makes it overshoot. Small comfort, because those TARDIS scenes are always a little dull and full of techno-babble. There's the epilogue that belonged in the previous episode (with some good miming), and then it feels like the Edge of Destruction or the start of The Web Planet, which is never a good thing.

On Earth, the Yeti are already fighting the British army as headed by the dashing Captain Knight, although his charms don't quite work on Anne Travers, a correctly characterized feminist (i.e. she doesn't talk about it, she just lives it, and doesn't suffer sexist fools easily) who's sure to steal scenes from under Victoria. Is she an early prototype for Liz? Also hanging around is effete embedded TV journalist Chorley, and insufferably fake character, which may or may not be the point. As usual, our heroes get themselves into trouble soon after they land, with Jamie being particularly (if understandably) foolish, almost stepping on electrified rails, then his lies leading to the soldier blowing up the tunnel where the Doctor is. Sadly, that cliffhanger is ruined by the extra shot of the explosion being contained by the Yeti's webs. What the hell, guys? And don't skip over the credits because you'll miss a damn creepy underlay with some kind of bacterial growth dancing around. Foreshadowing?

THEORIES: The Doctor says "Funny, isn't it, how we keep landing on your Earth?" It makes me wonder if there's something in the TARDIS that is attracted to Earth and/or humanity. Going by the voyages refereed to by the first Doctor and Susan, it seems the Doctor had an interest in the planet to begin with. Was the TARDIS easier to control before it beached itself in Ford's yard? Or was the TARDIS he stole one used specifically to explore and police the human race? If the former, the Doctor's fate might have been sealed the minute he let humans on board. I could well imagine the machine programmed to find a new home for any stowaway and using his or her genetic make-up to find it. A security measure to make sure unauthorized personnel are cleansed out. Of course, if the Doctor has human DNA (the 8th Doctor conundrum), this could be true from the first...

REWATCHABILITY: Medium-High - Doctor Who was designed to be on film, it just can't afford it for most of the time. The Web of Fear starts out strong out of the gate, with moody filming, and the return of beloved monsters.
Doctor Who

John Nor said…
"If robot Yeti fighting Tibetan monks on behalf of a Lovecraftian intelligence was strange, their creators Haisman and Lincoln just pile on more weirdness in the sequel."

Yes, though them roaming the London Tube tunnels, throwing out webs - it just seems so right, somehow.

Season 5 is fascinating, particularly this story and the next.

Siskoid said…
The new series keeps threatening to bring the Yeti back. I hope that when they do, the new stories keep to the mood of these ones.
June 3, 2012 at 9:25 PM

Siskoid said…
The TV Movie would seem to indicate the Doctor is half-human. It has caused no end of fury and debate in the Whovian community.
June 4, 2012 at 1:35 PM

mkhall said…
Interesting, thanks for the explanation. In trying to find the answer on my own I discovered that there are considered to be multiple 8th and 9th Doctors, too, which would seem to cause its own trouble. Perhaps they should hire DC to clean up their continuity for them?
June 4, 2012 at 1:45 PM

Continuity has been cleaned-up anyway, by the Time War. In erasing Time Lords and Daleks from the timeline, a lot of stuff has been reset I'm sure. By extension, history is malleable and events in one Doctor's time track may erase a potential future self (or even past self, as the Valyard tries to prove). But these are theories better left for the tail end of this project.
June 4, 2012 at 1:50 PM