June 19, 2012
"I've been created for some false kind of existence where only known kinds of emergencies are catered for." 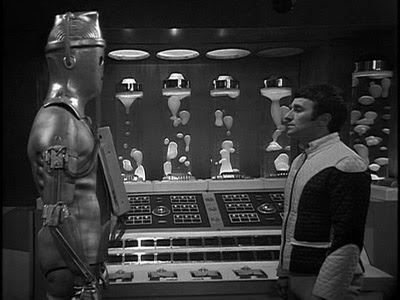 TECHNICAL SPECS: Missing from the archives aside from a few brief clips. A reconstruction (Part 1, Part 2) was used. First aired May 25 1968.

IN THIS ONE... The Doctor deduces the Cyber-plan and it's insane. Zoe and Jamie go for a spacewalk as meteors swarm.

REVIEW: NUMBERS! So many numbers! All the time! Like some NASA countdown that's eaten too much sugar! As usual, it's those procedural elements that put me to sleep. It's supposed to be exciting, with meteors (more properly, asteroids) bearing down on the Wheel and getting shot at a furious pace. However, the asteroid effect is rather silly, perfect spinning spheres that they are. Sending Zoe and Jamie into that at the end of the episode to get the lost time vortex generator just feels like forcing an extra bit of jeopardy in there. I'm going to put at least part of the blame on director Tristan de Vere Cole here. The story's pacing has been painfully slow, and when we have action, it's unintentionally comical - Flannigan knocking heads on doors and smoking Cybermats spinning around (the former is an embarrassing surviving clip), and of course, spinning Christmas decorations.

The writers must fess up to the worst of it, however. This is the episode in which the Doctor deduces the Cybermen's plans, a deduction never contradicted in the story, and they are rubbish. Their goal: To take control of the Wheel and use it as a base from which to launch the invasion of Earth. Fair enough. Step 1: Make a star go nova. 2. Smuggle yourself aboard a deserted ship full of bernalium and coast near the station (while sitting in big eggs for NO REASON WHATSOEVER). 3. Send over some Cybermats so they can eat all the bernalium on the Wheel. 4. Without bernalium, they can't fire their weapons, so if they didn't already destroy the derelict ship before the Cybermats could do their job, allow the Wheel crew to investigate and find bernalium aboard it. 5. Mind control the crew members and smuggle yourself aboard the Wheel. 6. Let the crew fix the laser and protect the station from the nova-created meteor storm. 7. Take control of the air supply and suffocate the crew. 8. Say to yourself how clever, clever, clever you are. There are a hundred ways this could have gone wrong even before the TARDIS landed aboard the Silver Carrier. Even Step 7 is overly convoluted. The Cybermen can kill you with one zap of their chest unit, or take control of your brain, or probably choke you out manually with their great strength. Once they get aboard the Wheel, why not just do that? The nova thing is complete overkill as well, and a complete contrast to the invasion force consisting of two whole Cybermen. Sometimes in episodic television, a plan will seem convoluted in retrospect yet seem to stand up on an episode-by-episode basis. But all unfurled in one go by the Doctor, as it is here, it really seems to work of a crackpot. (See Theories.)

Where I find something to like is in metatextual elements that may have been on purpose or not. I think this is the first onscreen acknowledgement, for example, that people trust the Doctor even though they don't know why they do. It's because he's the protagonist, of course, but I've made the argument that his Time Lord telepathy may be smoothing things over with open-minded characters. Zoe's complaint about having been badly designed also sounds like the plight of a character in a fiction more than the existentialist crisis of a real person. (Again we see why she will end up on the TARDIS, on a quest to become a more complete person/character.) Might these lines have been planted by script editor Derrick Sherwin? Fury from the Deep also serviced this idea. If Zoe is like the rest of the Wheel crew, i.e. uncreative and unable to adapt to anything beyond what they were "written for" (because they must need the Doctor's help and cannot be self-sufficient for the drama to unfold), then it's only in joining the cast at the end that her character can grow. But I'm not sure any of this was done on purpose, or that it in any way redeems the episode or story.

THEORIES: Cyber-plans... Why are they so convoluted? The Wheel in Space is one particularly horrendous instance, but there are others, most notably Earthshock, which has a whole bit with androids hiding down tunnels on Earth while Cybermen hide aboard a spaceship light-years away. You could probably poke holes into every plan they ever hatched from piloting Mondas towards Earth, to the "we really don't want to be awakened" traps inside their tomb. It's at a point where I'm ready to call it - the Cybermen have a major design flaw. In removing emotions from their human brains, they've removed something essential to how humanoids reason. Instinct and feeling have a role to play in how we make decisions, insofar as they inform us of what is important and valid. The Cybermen are lacking that trait and so go from one "if, then" function to another with no value judgement placed on the worthiness of any given element. Once they posit a part of the plan, their brains will close off loopholes and calculate effects, and the entire plan will "work". The plan's different steps will not, however, be evaluated beyond a "Y/N" function. They ask whether it will work, not whether it is efficient, redundant, dosed properly or "right". A human might improvize, in conversation, a plan as convoluted as that, but in practice, that human will go back, evaluate, eliminate, rethink, adjust. I don't think the Cybermen are doing that.

REWATCHABILITY: Medium-Low - While Zoe remains a viable companion in the making, this episode is mostly about the guest cast reading off numbers, and the audience scratching their heads at the Cybermen's plans.
Doctor Who

snell said…
I've always thought that one of the reasons people trust the Doctor is his Companions. Sure, the guy seems nutters, but if this seemingly perfectly normal person implicitly trusts him and travels with him, he must be all right.

Contrast with, say, Midnight, where he has no companion with him, and things go really pear-shaped, because his pronouncements seem arrogant and daft and there is no one around to show that there is a reason to trust him...
June 19, 2012 at 9:36 AM

Siskoid said…
While I've often said this as well, in this case, I don't think it applies. We're on an acepticized space station, and the only companion is a kilt-wearing ruffian who gets caught committing sabotage.
June 19, 2012 at 10:15 AM