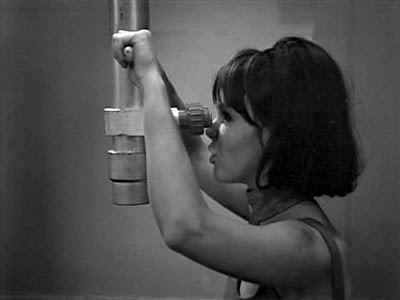 IN THIS ONE... The Doctor tricks the Dominators into destroying themselves.

REVIEW: The villains continue to be unforgivably one-note - even *I'm* frustrated for Toba that Rago continues to stop him from satisfying his bloodlust, only to call for some destruction himself - but this is an episode in which the Doctor catches an atomic bomb in his hands, so there's that. Here, at the end of the story, the Dominators and Quarks run out of time to redeem themselves, and confirm just how rubbish they are. You can easily sneak up on a Quark and trip it up, even though it has no visible eyes. The design would have seemed to indicate it had 360 visions (those little circles could all be miniature cameras), but no, the script won't cooperate. So it's a few more cartoony deaths for them, exploding and only leaving their silly feet behind, as the Dominators stamp their feet and allow themselves to get blown up real good by their own petard. That's what you get for sending down two guys to do the job of a hundred. I mean, what if the Dulcians HAD been warlike and clever? And what happened to the Dominator fleet after this? Crashed down when they ran out of power, or tried again? I can't actually say I care one way or another.

Someone who IS warlike and clever is Jamie, whose continued guerrilla tactics are proving both exciting and useful. Not only that, but his idea is what makes the Dominators' defeat possible. Zoe is stuck in the lab assistant role, which isn't a bad place to be. The Doctor, genius though he may be, takes care of the comedy. On two occasions, he blathers on as danger looms - while holding a time bomb, and waiting for the volcano to erupt - and must be brought to order by one or another of the companions. It's the same joke as the radiation scare from Part 1, so is wearing a bit thin by the end of the episode, but at least he's doing SOMEthing to make the episode livelier. The sonic screwdriver returns, in a sense, for the first time. We saw it work as a screwdriver in Fury from the Deep, but here it actually does a lot more, digging a huge tunnel like a powerful blowtorch. It's the introduction of the Doctor's iconic "magic wand", played by the time vortex generator in The Wheel in Space.

So on one side, rubbish guest characters, and on the other, dynamic performances from the regulars. In the middle is the plot, which is at least energetic in trying to reach the end. The underground bunker previously introduced (and it's nifty periscope) makes a good staging area for the heroes' conquest. There are a lot of fireworks despite Roga trying to put a stop to it. The Doctor's body double runs through the quarry at breakneck speed. And stock footage of volcanic eruptions follow the destruction of the flying saucer. No time for goodbyes, which is good because I never want to see the Dulcians ever again.

VERSIONS: Ian Marter's Target novelization is tighter than the original serial, but I'm unaware of any changes of insignificance.
REWATCHABILITY: Medium - A good one for Jamie, and I can't fault the action, but the baddies have definitely worn out their welcome and inspire only apathy.

STORY REWATCHABILITY: Medium - While The Dominators has some good effects, especially up front, the one-dimensional villains, silly killer robots, and drab guest roles drag the whole thing down. What were the writers trying to say anyway? Was pacifism and/or hippies really a good target of satire in a show about an anarchist who won't use a gun? It's kind of too bad they seemed to spend all that money on it.
Doctor Who