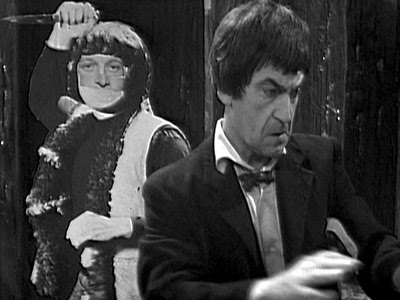 IN THIS ONE... The TARDISeers find themselves in a forest of words and Jamie gets momentarily recast!

REVIEW: If Part 1 is the blank page - a medium - Part 2 brings in the building blocks used to write stories. It starts in a forest of words (the only effect that truly fails, less because of scale than because of camera angle) and makes use of words as proverbs, puzzles, riddles and puns. We're not quite yet at the point where they are ordered into a story. The fairy tale quality of each encounter may give the impression that anything can happen (which is boring), but there are definite rules to this reality. Words are signifiers and manipulating them operates some alchemical transformations. I'm reminded of the French poet Rimbaud, but that's because I'm so very pretentious. But that's basically how it works. Messages transmitted through a rebus puzzle. A pun turning a door into a jar. A sword becoming a dictionary as SWORD is re-ordered into WORDS. Even Gulliver (here only known as the Stranger) is the word made manifest, speaking only in sentences from Swift's novel and unable to completely acknowledge things that aren't a part of his pre-defined story.

A similar alchemical process is worked on Jamie, turning Frazer Hines into Hamish Wilson for a couple episodes while the former recovers from chicken pox. That's really inventive! One might imagine the production team keeping to only the first half of the idea, Jamie getting turned into a cardboard cut-out by a shot from a toy redcoat. It's cool and freaky and well shot in and of itself. But since the episode is about signifier and signified, and about wordsmithing, it makes perfect sense that they would play with "A Jamie by any other casting..." with the character. Wilson does well enough, but by making the part his own, also keeps things ambiguous. Is this the Jamie we know and love, or an impostor? Of course, we've played this game with the Doctor before...

Emrys James plays the first character in Who to be called "The Master", but adding to the confusion, he uses two separate voices, a split personality performance that reminds one of the Great Intelligence's hold on another "master", the Tibetan monk Padmasambhava. He's definitely not the former, but the latter might yield a connection. Is a Great Old One involved? Or is it rather a kind of Guardian like the Toymaker? We're reminded of him too, what with wind-up soldiers walking around (and well executed ones at that). In places, The Mind Robber seems derivative, but is it perhaps using Doctor Who tropes in the same way it uses other language elements? Whatever the case may be, it is a lot more impressive than The Celestial Toymaker ever was. First because it has an inner logic Toymaker didn't have, and second because it has gorgeous visuals like the savage unicorn, Zoe in a test tube, etc.

THEORIES: The Land of Fiction has so fascinated some extracanonical authors that they've tried, on occasion, to link back to it, most notably in the novels Conundrum and Head Games. Marc Platt's short story "Future Imperfect" for example, has Gulliver be the Time Lord Goth, sent to monitor the Doctor's activities, a choice based on the fact that both characters were played by Bernard Horsfall. While I can appreciate Goth as one of the Time Lord judges in The War Games, this is a bit much. Is he also posing as a Thal in Planet of the Daleks? Such theories quickly fall apart. Thankfully, no one has seriously attempted to link the Master of the Land with the Time Lord called the Master (except in online forums).

REWATCHABILITY: High - Visually inventive, it will have the kids playing along with the riddles and puzzles, and the adults thinking about the meta-textual concerns of the story.
Doctor Who