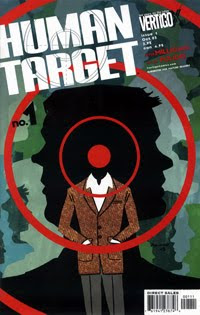 When it was new: Starting as a 4-issue mini-series from DC's Vertigo label in 1999, written by Peter Milligan with art by Edvin Biukovic, it had enough success for a follow-up graphic novel entitled Final Cut in 2002, this time with art by Javier Pulido. In turn, this led to an ongoing series that lasted 21 issues, from 2003 to 2005, with Pulido and Cliff Chiang alternating on art (with Cameron Stewart filling in on #17).

Premise: The DCU's Christopher Chance is a master of disguise who specializes in taking the place of people in danger in order to prevent their deaths. Milligan's Vertigo twist on the concept is that Chance is a man with so many identities, he really has none. He loses himself in the people he plays and is in constant danger of never finding his way out.

On target: Though the Human Target corpus tells a number of 1, 2, 3 or 4-issue stories, Milligan avoids turning the series into Quantum Leap, and instead creates a 600+ page meditation on identity, not forgetting to through some thrills along the way. By splitting narrative duties between the impersonator and the person impersonated, the writer creates osmosis between them and makes various twists possible. Are we looking at Chance, or the real so-and-so? Not so easy when even Chance isn't sure, and I was surprised that even late in the game, the comic could still confound me and turn the tables on me without it seeming stale. Chance isn't alone in his quest for identity, and we meet others who have re-imagined themselves, sometimes leading to a Russian doll effect as Chance delves into his alter ego's alter ego. The mini-series is the most extreme example, as we're introduced to a new Human Target, Tom McFadden, Chance's pupil. When they start impersonating one another, it's anybody's guess who's who. Don't worry, the plots aren't so convoluted after that, but the events of the mini and of Final Cut have consequences that will take the characters to the very end of the ongoing. 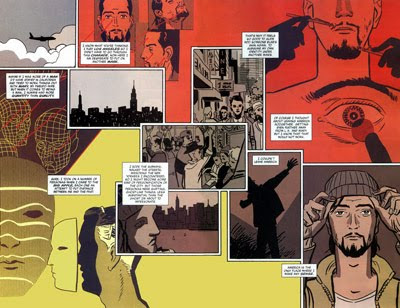 The ongoing series is one that lives in the shadow of 9/11. It feels very current and somewhat controversial, and doesn't always give you easy answers. Its first arc has Chance replace a man who was supposed to be at the World Trade Center that day and faked his death. Now his second life's in danger from those he was hiding from. Guantanamo Bay, illegal immigration, homegrown terrorism, religious cults, baseball scandals... There is no fear of the topics here, and a surprising lack of what I would call "formula" despite the high concept premise. The artists each have their own unique qualities, but enough of a common aesthetic for their work to feel of a piece with the rest. Biukovic set the tone, with inventive lay-outs and panels and deconstructed images, but Pulido is really the one who took it to a whole other level, forcing the eye to small details as if we were Chance himself, analyzing every character to profile his or her life. All in all, a deep and involving reading experience. The series asks "Who is Christopher Chance?" but also "Who is the reader?". No easy answers forthcoming.

S said…
I don't think I've ever read the mini, but the ongoing was my favorite series when it was coming out. Just excellent stuff from Milligan.
June 27, 2012 at 4:13 PM

Siskoid said…
Maybe some time, though not in the context of the Old52 project.

Anonymous said…
Human Target is one of my favourite series ever. So perhaps you could do some Human Target Tuesdays?

Siskoid said…
I'll think about it. In the meantime, feel free to click the Human Target label for HT content you might have missed.
July 4, 2012 at 8:05 AM