Reign of the Supermen #425: Superman, Junior 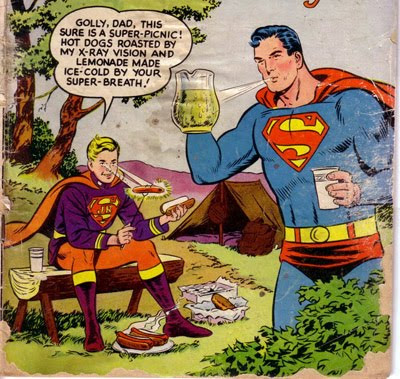 10 issues shy of the official Silver Age, we're already getting some very Silvery stories. In this one, a spacecraft crashes on Earth and Superman investigates, suprised to find a blond boy unharmed in the wreckage. Everything seems fine except... Superman's P.R. has failed! 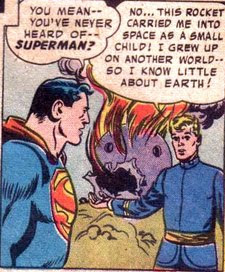 But Superman HAS heard of this boy! He's Johnny Kirk, the son of astronomer Morton Kirk. Back in the day, Kirk Sr. lived in isolation so had never heard of Superboy (no really, Supes, you need a better press agent). So can we fault him for panicking when he spotted a planetoid on a collision course with Earth and sending his small child into space? If it's good enough for Jor-El... But Superboy DID exist, and he saved the Earth, but it was too late, the spaceship was long gone. Kirk asked Superboy to find it, but he never could, and on his death bed, Kirk asked Superboy to open a note if and when baby Johnny was ever found. Upon opening the note, Superman finds Kirk has asked him to ADOPT the boy, and he can't refuse.

When he returns to tell Johnny the news, he finds the kid has all his powers from having flown into a space cloud as a child. As he tells it, he landed on a primeval world and grew up there, doing things only a super-powered boy with lots of books about Earth could. 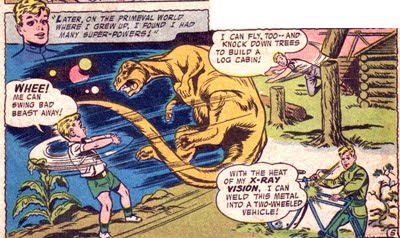 Johnny's super-happy to get a second dad like Superman and together, they fight crime and forest fires. Johnny even scores an S-shield. But uh-oh... 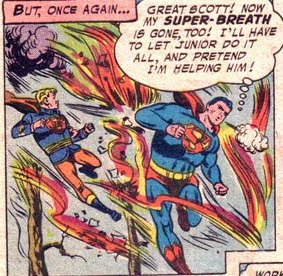 One by one, Superman's powers are disappearing, but of course, he can't tell Johnny about this BECAUSE PRE-CRISIS SUPERMAN IS A PATHOLOGICAL LIAR. He has just enough juice in his microscopic vision to determine that the space cloud particles on the ship's hull have contaminated him and is having a detrimental effect on his Kryptonian power set. So now it's about training young Superman, Junior to eventually take his place. He takes him to Smallville where HE started out, and takes on a new identity, that of Morton Kirk. 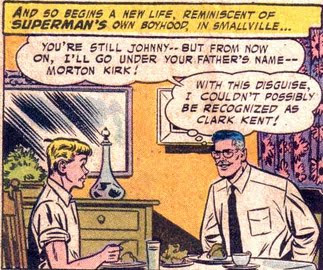 Not only doesn't anyone recognize him as Clark Kent, but he doesn't tell his adopted son about the Clark Kent persona (LIAR), nor does the Daily Planet call to see when he might be coming in to work. The training goes on, but it's more and more difficult for Superman because he keeps losing powers. When he's down to flight and super-speed, for example, he can only save the Smallville Explosives Plant from a lightning storm by causing enough friction while flying through windows to cover himself in molten glass, preventing him from being electrocuted when he stops the thunderbolts. Because everything in that sentence makes sense, I will brook no discussion on the topic. 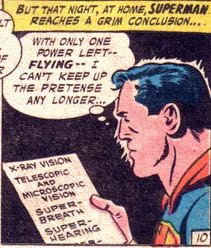 Even his super-wits have failed him, which explains why he needs a checklist of his own powers to know which ones he can and cannot use. He knows he must soon surrender the role of Superman to Johnny while he vanishes into obscurity (choke). The next day, Johnny spots a a glowing meteor heading for Earth and flies off to intercept, but Super-Dad can't follow because his flight has also failed. Fearing the meteor to be kryptonite and thus deadly to Johnny (why would it be, since he's human?), Superman uses the last once of power he has to jump down on a springy tree and propel himself into orbit, where thankfully, he can still breathe. However, there's no danger because the meteor is made of a rare metal that absorbs super-powers like a battery on its "negative end" and gives them to whoever is on the "positive end". And thus will Superman's powers be renewed. But how did Johnny KNOW? Well... 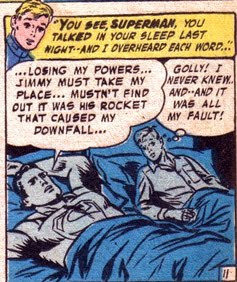 Ok, stop focusing on the fact they sleep in the same bed for a minute... That's right, Superman talked in his sleep. That's what happens when your subconscious calls you a Liar Liar Pants on Fire. Johnny's kindly transfusion leaves him powerless and Superman completely restored. So Johnny dies, choking in orbit, right? Wrong. 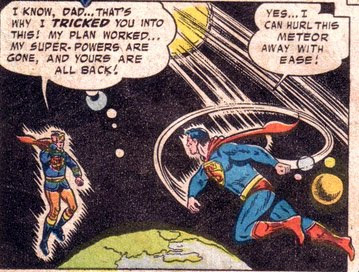 So now Superman is the proud father of a completely human adopted son, right? As was the deal he made with Kirk, correct? Again, wrong.

He abandons him on a street corner with the lame promise of never forgetting him. Why ISN'T he your own son anymore, Superman? Because you're a deadbeat dad, that's why.

Johnny Kirk was soon forgotten and never spoken of again (despite the story being reprinted in Superman Annual #7 in 1963).
Comics Reign Silver Age Superman

LiamKav said…
That's oddly specific sleep-talk there (apart from getting his son's name wrong, of course). I suppose we should be thankful Johnny didn't hear his dad asking Lois where she was ready for his super-junk.
June 14, 2012 at 12:11 PM