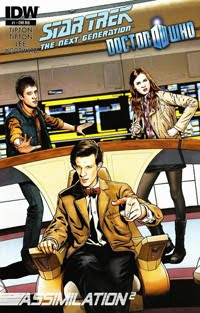 PUBLICATION: Star Trek: The Next Generation/Doctor Who: Assimilation2 #1, IDW Comics, May 2012

STARDATE: 45635.2 (between The Outcast and Cause and Effect). In the Doctor's timeline, this occurs during the 11th Doctor's Series 6 travels with Amy and Rory.

PLOT: In the 23rd century, the Borg are attacking Delta IV. In Ancient Egypt, the Doctor, Rory and Amy capture an alien posing as Grand Vizier. The TARDIS' next destination, after a twinge of dimensional feedback, is 1940s San Francisco, except there are some very familiar characters, including an android, standing near the bar...

CONTINUITY: The Borg are in between their appearances in "The Best of Both Worlds Part II" and "I Borg". Delta IV and the Deltans were first seen in The Motion Picture. The USS Potemkin, an Excelsior-class ship which Riker once served aboard ("Second Chances"), engages the Borg (and survives to serve in the Dominion War, according to "You Are Cordially Invited"). The TARDIS materializes in the Dixon Hill holoprogram, first seen in "The Big Goodbye". On the Doctor Who side of things, Rory uses his skills as a Roman soldier to drive a chariot ("The Pandorica Opens"). According to "Army of Ghosts", Cybermen have the ability to walk across to parallel universes which may explain their presence here. 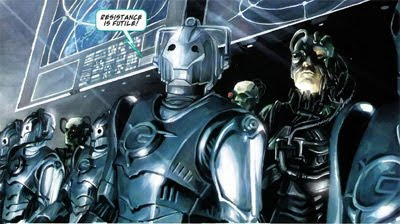 REVIEW: If the TNG/Who crossover's first issue is a disappointment, it's largely because it's just a prologue to that crossover. The Borg and Cybermen attack Delta IV, but the Starfleet personnel at the scene aren't people we know, or particularly developed. Then the Doctor and his companions finish an adventure we weren't privy to, and that takes up a lot of pages. And only on the last page do TNG characters actually appear, before any interaction can occur (though admittedly, it's a nice little twist to have the Doctor think he's in one era when he really isn't). The Doctor's adventure in Ancient Egypt isn't un-entertaining, but Tony Lee and the Tiptons cross the line between homage and plagiarism in the dialog. There are just too many lines filched from 11th Doctor episodes, to the point of cliché. Better speech bubbles do a good job with the Doctor's usual running off at the mouth (and he picks up a new hat!), Rory's worrying, and Amy taking the piss out of both of them, but there are too many catchphrases spread throughout the book. It's silly. As a Doctor Who book, it's ok, but I would gladly have sacrificed the Doctor's adventure to get to the crossover more quickly. As it is, while the Cybermen and the Borg they inspired make natural allies (or do they? won't they want to assimilate each other eventually?), the Starfleet sections really did need identifiable characters. It kinda looks like the Borg are attacking, and the Enterprise-D's crew are lounging around on the holodeck. The Brothers Tipton and Tony Lee can do better than this, so I have higher expectations from them next issue. As for the Woodward's art, the fact that it's fully painted tells me IDW sees this as a vanity project of some importance, but the reliance on photo references frequently bleeds through, with figures looking stiff and unnatural in places. For the most part, it's colorful and animated, so I'm not complaining too much. It's par for the course on this kind of thing.
Comics Doctor Who Star Trek

Matthew Turnage said…
I liked the art, but I'm generally more lenient about stiffness with painted art, and I expect a great deal of obvious photo reference in a project like this. Maybe I've set the bar too low, but there you have it.

My brother has asked me to contribute to his comic blog (Penultimate Issues) this summer and I posted my review of this issue there if anyone might be interested, just don't be afraid of the url: http://www.pissues.com
June 5, 2012 at 6:56 PM