10 of My Favorite RPG Mechanics 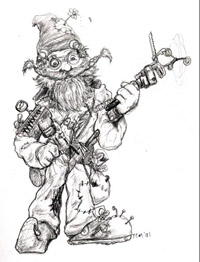 You know me. I have a pretty big collection of role-playing games (mostly accumulated during the 80s and 90s) and I've run and played my fair share of them. I've seen all sorts of approaches to character generation, combat, powers, advancement, story manipulation and genre emulation. But it's only once in a while that some rule or game mechanic so completely entrances me that it actually changes how I perceive the hobby, often causing me to integrate said mechanic is other games. Here are 10 of my favorites in no particular order. Don't be shy about sharing yours.

Cinematic Points
Even after playing years of DC Heroes which had a Hero Point mechanic, I still didn't clue into the usefulness of what I now call Cinematic Points until much later, using Chad Underkoffler's plug-in for GURPS published in Pyramid. Whether you call these Karma, or Bennies, or Story Points, or Star Power, CPs are a pool of points you can use to affect the story being collectively told. At their most basic (and boring), they provide to hit bonuses or health surges, but they get exciting when players use them to change details in their environment to make scenes more fun and memorable (anything from creating a beaker of acid on the lab bench to revealing a key henchman was actually working on their side). Cinematic Points effectively put some of the story telling power usually reserved for the GameMaster into the players' hands, and I've always found it a rewarding process. In fact, I've actively chosen games with the mechanic since, or considered adding them to help in genre emulation where they were absent.

AD&D's Kits and Factions
This could have been a token D&D entry (the only game many gamers care about), but I was genuinely excited when 2nd Edition came out with the Fighter's Handbook and all those great ways of differentiating one Fighter from another. Other books in the series varied in quality, but the core concept was sound. Without actually splatting tons of new classes, you could add a layer of flavor (be it role, culture or trope) on top of very basic classes and create an entirely new playing experience. With Planescape, my favorite D&D setting of them all, Faction (the character's philosophy) added yet another layer. And with each layer, you gained cool abilities and interesting-to-play flaws.

FATE's Aspects
On the opposite end of the spectrum from D&D, and coming to me via Over the Edge, is the way the FATE family of systems handles attributes. Instead of every character having the same quantifiable stats (you know the ones, STR, DEX, END, INT, etc.), the player would basically be in charge of creating a catch-all attribute that would come into play any time an element of that "Aspect" became relevant. For example, you might have a wide archetype like Civilized Barbarian or Gentleman Thief, or a more focused personality trait like Tough Customer or Wiseacre. Depending on the game, it can also be a key gadget like Sentient Sword or a super-power like Insects Follow My Every Whim. The lesson is that you don't need a whole bunch of nitty-gritty rules for every possible character concept or effect, and it's an ultimately freeing one.

DC Heroes' elegant MEGS
The Mayfair Exponential Game System (or MEGS) is the engine that used to power DC Heroes RPG (and still powers Blood of Heroes, its DC-free variant), and I love its elegance. Not only does it solve the problem of exponential attribute systems required of super-hero gaming (you have to model Superman and Lois Lane without the math getting out of control), but it effectively hides its mechanics from view during play. Players roll their Acting Value against an Opposing Value, and the better they roll, the better they might do when confronting Effect Values to Resistance Values. It sounds a little complicated when I try to explain, but magically, it's incredibly simple during play. The GM simply cross-references numbers on just two tables (AV/OV and EV/RV) and the trick is done. No muss, no fuss. A brilliant piece of game engineering.

DC Adventures' Combat Advantages
Running on the most recent edition of Mutants & Masterminds, DC Adventures solves a couple problems I've had with many superhero games. One, how to make non-powered heroes as interesting as their powered counterparts and not all seem like the same exact character on a stats level. And two, how to allow superheroes to improve over time without screwing up their entire core concepts. The solution is Combat Advantages (and to some extent, other types of Advantages, like Skill Adv.) that are basically maneuvers a character has gotten especially good at. A hero being particularly good at aiming, or having a bag of martial arts tricks that include sweep-the-leg and feints, are things that can be added over time without corrupting what the hero was all about to begin with. It's a simple idea that I've been trying to retrofit into DCH for upcoming games.

Savage Worlds' Common Knowledge roll
A role-playing problem it took me a long time to crack is how to get certain elements of any given campaign world across to the players without an info-dump character, or worse, asking them to read pages and pages of a sourcebook. SW makes the point that characters living on a world will know things about that world the players don't. The Common Knowledge roll is an easier-than-normal Smarts roll that allows a character to tap into that information, while still allow them to sometimes be ignorant. It also gives players a reason to invest in their characters' backgrounds, because the brash nobleman and the lowly farmhand won't be allowed to roll Common Knowledge in the same situations. Irrevocably changed how I treat Intelligence/IQ in my games.

Doctor Who: Adventures in Time and Space's initiative system
In recent years, DWAITAS has given us a wonderful bit of genre emulation through an initiative system that makes Talkers go first, followed by Runners, then Doers, and finally Fighters. The idea is to encourage Doctor Who games to resolve like a lot of Doctor Who episodes do, with the Doctor winning on words or jiggery-pokery while the Daleks somehow always shoot too late. It's a great feature to get players away from the combat-centric way most games deal with adversarial encounters, and could be used as a model for how parlay works in other games, or how to handle non-combat games in general. (Don't worry, the UNIT Sourcebook adds a Trait that allows impulsive or well-trained fighters to move up the cue. Brilliantly, it's called Five Rounds Rapid.)

Toon's 50/50 Rule
Another great lesson in how not to over-complicate things. Toon's cartoon aesthetic says that whenever a player asks a question about his or her environment, you can simply roll the dice (or a coin, frankly) with yes or no having an equal chance of being the result. That's as true of "Is there a cliff nearby?" as it is of "Is it raining anvils?" I've learned to keep things flexible instead of sticking rigidly to a hand-drawn map or room description. A 50% rule like this one allows you to give players what they want to make a scene interesting about half the time, without catering to their every whim (the other half of the time).

Paranoia's Dramatic Tactical Combat System
Be interesting, live. Be boring, die. I couldn't have said it any better. I've heard the words "I slash at it" and "I shoot it" enough for multiple lifetimes.

So what are YOUR favorite RPG mechanics?
RPGs

Philo Pharynx said…
White wolf's Scion has a stunting rule. If you describe your actions in an interesting way, you get an extra die in your die pool and you regain a point of legend (one of the two pools you use to power your abilities). If your description involves using the scene in an interesting way, you get two dice in your pool and can regain a point of legend or willpower. If your description is absolutley amazing, you get three dice and an experience point.

This works because it's a game where the characters are the children of the gods. They are supposed to create a legendary story and having really good narrative helps to do that.
October 24, 2012 at 5:12 PM

Siskoid said…
That's not far off of how I play most "heroic" games, lessons learned from a lot of the mechanics I mentioned.
October 24, 2012 at 6:54 PM

thesethingsthatiwrite said…
If I ever host the RPG blog carnival, I'll be asking a question that you've come very close to answering! A great read sir.
October 25, 2012 at 7:10 AM

My list turned a bit long (who could've guessed?) so I ended up making a post out of it:

Siskoid said…
Awesome! There's no greater reward than seeing your blogpost turn into a meme. I'm heading over there this morning.
October 26, 2012 at 7:20 AM

Unknown said…
Just wanted to say thanks for your great post, Siskoid! I'm trying to design a play-by-email game and you gave me some great ideas to test. I'm thinking of starting with almost no rules and then building as I go. The players aren't rules nazis so they won't mind as long as it's fun.
January 29, 2014 at 9:58 PM