My Tawdry Love Affair with Who's Who 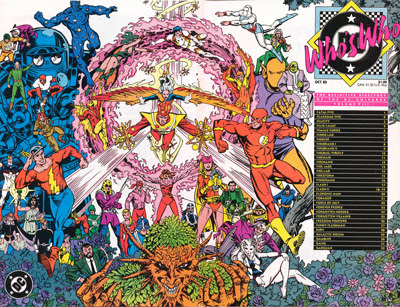 I can hold my tongue no longer! With the advent of the Who's Who Podcast, in every episode of which fellow bloggers Shag (Firestorm Fan) and Rob! (Aquaman Shrine) take an hour and a half to discuss a single issue of DC Comics' seminal encyclopedia series, I am forced to revisit one of my favorite comics series of all time (almost) monthly. Who's Who has had a huge presence in my life - be warned, this post is labeled "Geeks Anonymous", it's about to get hairy - which makes DC's wholesale dumping of its continuity before a promised new edition could come out all the more distressing to me. Here then are some of the ways I've indulged my Who's Who fixation:

Mnemonic exercises. Some people marvel at my bear trap memory, but I really owe it to my frequent use of mnemonics. When I walk to and fro (I refuse to drive), I'll often try to complete some list from memory. It might be all of Shakespeare's plays, or 100 GURPS sourcebooks, or indeed, every entry in any given issue of Who's Who. Abel - Abnegazar, Rath & Ghast - Abra Kadabra - Adam Strange - and so on. For 26 issues plus updates. (You can see why I don't like the loose leaf version as much.) A lot of the following mental experiments are linked to my returning again and again, in mind if not in body, to the series.

The Super Seven. In a sort of mental Dial H for Hero, and starting with volume VII when I was in 9th grade, I would select 6 of my closest friends and assign them a superhero identity for the month coinciding with an issue's release. For convenience's sake, the group would always be 5 boys (myself included) and 2 girls (fewer of those characters in the DCU). Believe it or not, they were in on it, and I'd sometimes trace up a picture out of Who's Who and give them the drawing so they'd know who they got to be. The first character I ever became through this process was Dr. Fate. Writing this down, I seem to remember there was a Sinister Seven, made up of school rivals (NOT in on it) from the same issue, but I doubt that lasted. The group of Seven changed over time, obviously, but as Who's Who wasn't consistently published, it might not have mattered who they were, except...

Super Seven - The Band. As corollary to the above insanity, I soon began to imagine the Seven as a band that would play any song I listened to. So when daydreaming while listening to music, I would (and still do) imagine the song played live by this imaginary band. The thought experiment probably started with everyone in costume, but now it's in civilian clothes. 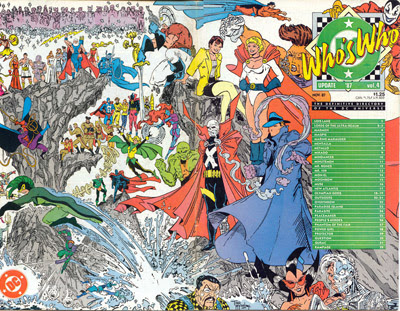 DC Heroes edition. DCH is assuredly one of the role-playing games I've MOST run, and I own almost every product made for it, in all editions. One of Mayfair's coolest ideas was to issue companion pages to the loose lead Who's Who, with game stats, how to play the character's personality, plot hooks, and not really related to gaming, a list of all the comics the character has appeared in. I immediately doubled my number of binders and put the DCH sheets right next to their Who's Who counterparts and it's made it easier for players who want to guest as an established hero in my games that much easier. Sadly, Mayfair never published the fourth and last volume which would have contained the Vertigo issue and lots of Doom Patrol villains. (Speaking of DCH, I'm gearing up a series of one-shot games in which players randomly pick characters out of Who's Who to create their own Brave and the Bold team-ups.)

Fashion Nightmares. I've tried to integrate Who's Who on the blog, but not altogether successfully. The closest I came to is under the Fashion Nightmares label, which also contains Marvel Universe material and, well, anything with terrible costumes, really. After clicking the link, you'll have to scroll down a little bit before you find Who's Who.

That last page. At the end of every issue of the original Who's Who was a black and white page that featured 6 current or upcoming covers, and a list of where you might find each character in the issue. As a kid living in a smallish town and no access to back issues, I would fantasize about getting a hold of the books I didn't have from the 6 featured. But I played fair. The game was that for each comic I already had on that page, I could choose another and it would magically appear in my collection. Had it been real, I guess I would have scored a lot of Omega Men. 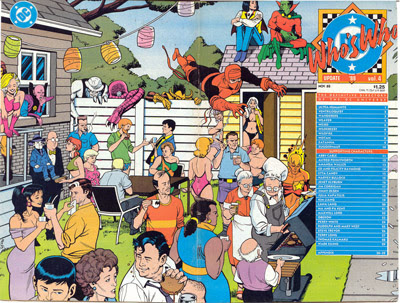 Fantasy action figures. Here's a fun one. I used to flip through my Who's Whos and imagine each entry as a toy. This was way before DC Direct, so the chances of seeing 95% of these characters as action figures was unthinkable. And yet I thought about it. It would be important to me (in those Super-Powers-fueled days) to give each one a gimmick, like light-up hands for the energy blasters, or some accessories culled from the "surprint" images. It wasn't just figures. Great playsets like the All-Star Squadron's Perisphere and Blackhawk Island were available too!

Fights and team -ups. One of the easiest things to do was imagining team-ups and match-ups based on page numbers. So for example, I might daydream about every character in issue 1 fighting those in issue 2, perhaps page-for-page. Or all the heroes fighting all the villains in the same issue, Secret Wars-style. Or even going cross-company to have a whole issue of Who's Who fighting a whole issue of Marvel Universe. Speaking of which...

Whos' Universe Amalgams. While comparing Who's Who to Marvel Universe, I would also try Amalgam experiments, combining characters that really had no business being amalgamated. Abel and Abomination? Crazy. (House of Abomination, if you're wondering.)

Fantasy Who's Who update. And of course, there's my regular activity of looking through old Who's Whos and imagining that same book rebooted to a later era. Each character is still there, but in today's clothes, side by side with his or her legacy characters, etc. The New52's made that a little more difficult (most characters have yet to be seen, though All Star Western is doing a great job filling the books up with western stars; and some new costumes I just don't want to imagine), but I might still do it, lazily turning pages on a rainy afternoon.

My name is Siskoid, and I'm a Geek. That's Who's What.
Comics Encyclopedia Geeks Anonymous

Matthew Turnage said…
I'm a big Who's Who fan as well, although I've never bothered to track down the loose-leaf version. Even though I read Marvel more than DC at the time, I found OHOTMU(DE) boring, whereas Who's Who was fun to read. I started picking up more and more DC books as a result.

I also lived in a small town, and the comics available to me were subject to whatever the guy was putting on the spinner racks at the three drug stores in town. The deluxe books were never available to me, so seeing covers of books like New Teen Titans, Legion of Super-Heroes or Omega Men was fascinating.
October 30, 2012 at 10:55 AM

Anonymous said…
They were such a good resource for superhero campaigns and just an interesting read. Also a fan.
October 30, 2012 at 11:24 AM

Siskoid said…
For gaming, seeing as I was definitely the most (if not at times the only) authority on the "game world" (the DCU), Who's Who proved invaluable as a "show and tell" element for players.

It also inspired one or two Halloween costumes. My roommates have been known to look through its pages for ideas.
October 30, 2012 at 11:30 AM

Austin Gorton said…
I love Who's Who, and really wish they had put out an updated version before wiping their continuity. But I'll always be a OHOTMU(DE) guy. Who's Who always felt slight compared to that, whereas reading OHOTMU felt like I was reading an encyclopedia, it was so dense with text. I could read an issue for hours as a kid. Loved it.
October 30, 2012 at 12:52 PM

rob! said…
Great post Siskoid! The first step to healing is admitting you have a problem.

The loose-leaf version of WW was a perfectly sensible way to approach doing an update, but to me only concentrating on "current" characters loses a lot of WW's appeal: i.e., digging up old characters and reminding those too young to remember just how vast DC's output had been in the previous 50 years.

Plus, the update used almost only modern artists--a totally understandable decision, to me again another part of the charm of the original was lost. WW introduced me to lots of artists, old and new, and helped reiterate the diversity that was possible. At a certain point, the update just started to all look the same.
October 30, 2012 at 7:36 PM

Unknown said…
I am a fellow geek. I post at WORG's mailing list page. And I have your "Siskoid's Collection of DC RPG" stats on my favorites tool bar.

I am disappointed to find out you are not real. I thought you were an actual person. Now I see you are illusory.

How do I know? With my high Int and Wil scores (each at 03) I deduced your secret.

Here's the Sherlock Holmes like moment: Do you remember writing that you had a hero-of-the-month with your friends in high school? That you'd sometimes draw the character for them? That you were able to divide up multiple heroes utilizing a mix of five males and two females?

Seven friends, huh? Gotcha'! No nerd had seven friends in high school! Two girls? Right. The jig is up, "Siskoid." Inspector, take him away.