November 02, 2012
"In our legend, there is a being - a figure from another planet who came to Skaro when the Thals were in their greatest peril... in something called... a TARDIS!" 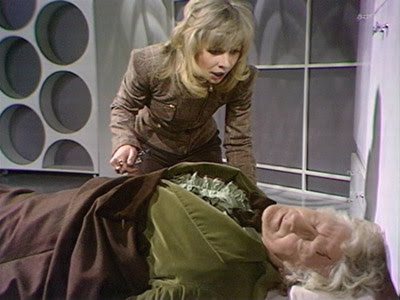 IN THIS ONE... The TARDIS lands on Spiridon, the Doctor has a concussion, and the Jo gets spritzed by a gross mushroom. Plus, not only Daleks, but Thals too.

REVIEW: Terry Nation is back writing for the program after more than 7 years, and he's brought his old obsessions with him, giving this serial a seriously retro feel. The TARDIS is once again a spaceship as it was in the Hartnell days, with bedrooms, and rather awkwardly, an air supply. Nation was always doing stuff like this, introducing some TARDIS system or accessory in each serial, features usually ignores by later writers. And they're right to do so. Nation's idea of the TARDIS is resolutely low-tech and far from the pocket dimension the program already suggests it to be. He's also got a dangerous jungle and the old, impossibly silly notion of creatures who have evolved the trait of true invisibility. It's the secret of this piece of scientific nonsense the Daleks are after. Yeah, it's got little to do with their scheme to set the Earth and Draconian Empires against one another, more or less ignoring its own set-up. Basically, the Time Lords remote pilot the TARDIS to the planet acting as the Daleks' actual staging ground, and that's all the connection you need.

Though this isn't Skaro, there is nonetheless a pleasant feeling of déjà vu if one has seen the original Daleks serial. The scanner's black and white pan across the lush jungle is in fact very reminiscent of The Daleks. In color, the jungle looks lush and claustrophobic, wet and sticky (certainly those fungus spewing plants - do they look like little Daleks to anyone else? - give the place its own unique flavor), and lit in stark greens and purples. The plot thread of a young female companion on her own and followed by a creepy, but well-meaning native is also from the original story, with a disgusting fungus replacing radiation as an environmental threat. Nation is a notorious recycler, but in this case, it feels like 10th Anniversary call-back, not a cheap retread. And unlike the highly convenient (and never seen) historical encounter between the Doctor and the Draconians that serves as psychic paper in Frontier in Space, the Doctor's first encounter of the Thals on Skaro DID happen on screen, and he thoroughly deserves their trust. Even felt a bit of a squee moment coming on when the Doc mentioned Ian, Barbara and Susan, as much as when classic characters get referenced on the new series today.

The Doctor's head wound suffered at the hands of the Master in the previous episode - an almost-victory the villain isn't there to enjoy - seems a lot more severe in effect than that small graze on his forehead would suggest. He almost dies, Jo can't find a pulse, and frost starts to show up on his skin! You'd almost think he was about to regenerate, but perhaps some cryogenic feature of his TARDIS bed slows down the energy building inside him and saves him from turning into Tom Baker prematurely. Jo is then left to talk to a cassette tape for the next 10 minutes, until she meets the Thals led by Bernard Horsefall's Taron (his numerous roles on Who to date are starting to draw attention to themselves). Except for the Doctor's absence through half the episode, the plot is fairly straightforward fare that keeps the Doctor and companion apart, Jo in jeopardy, and the boys to carry on with the adventure. I do question, however, the Doctor's surprise at seeing the Daleks revealed at the end since he's just called the Time Lords to get help against the tin-plated monsters.

REWATCHABILITY: Medium - Rather old-fashioned in approach, but that's not necessarily a bad thing. A fun wink to the show's past is welcome in this celebratory season, though yeah, I could have done without the revelations about the TARDIS.
Doctor Who