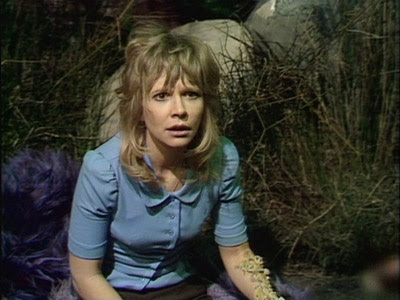 IN THIS ONE... The Invisible Man cures Jo of her fungus problem, and the Doctor gets captured by the Daleks.

REVIEW: There's something about sitting quitely in a jail cell that brings out the "daisiest Doctor" in our hero. Captured by the Daleks, his legs momentarily paralyzed just like Ian's all those years ago, he imparts kind wisdom on a young Thal scientist before autoderisively chuckling to himself about his "tutorial". Pertwee really is lovely in his quietest moments. Surely, this is Dicks' Doctor. Nation's Doctor is instead the mythical figure that is allowed to break the rules of story telling. He's the Doctor that somehow knows Daleks have alarm systems on their casings because the audience isn't going to remember this tidbit was never previously established nor did the Doctor encounter it in another adventure. He's the Doctor that empties out his pockets looking for a way out of his Dalek cell, and unlike the low-tech, do-it-yourself escape attempt back in The Daleks, the solution is a disappointing piece of technobabble. I accept this latter myth-Doc, but I'd rather see the former. Thankfully, I get him too, listening to Jo's log and believing her dead, murdered by the Daleks.

But she isn't dead. She was just moved to the CSO studio to get that ugly fungus cured by a Spiridon - shades of Susan getting help from a similarly tarped alien in The Daleks. The invisibility effects are variable, of course. The witch doctor scene is weakest, with rustling vegetation, but a perfectly still bowl... what's the Spirion doing with its butt exactly? The invisible attack on the Thals is much more effective. Director David Maloney keeps the jungle dark and atmospheric, but doesn't skimp on showing us the monsters when they become relevant. The big, animated vine. The little eye-plants (probably sensible in an ecology that features invisible creatures). And the Daleks too. Though few are animated, we probably get the biggest assemblage of them ever shown in the same room (without standees, that is). The promise that Spiridon hides 10,000 Daleks is on a scale matched perhaps only with the Skarosian finale of Evil of the Daleks.

At the center of this episode's concerns is the relationship between the various Thals. It's not an original story. There's an older, wiser, more cautious leader. There's a young, impulsive, impatient follower who wants to take his place. The Doctor sides with age and wisdom, of course, but also represents the push towards plot resolution the youngster craves. Another Thal ship crashes on the planet, and introduces a few more Thals to the mix, presumably as cannon fodder, though Rebbec has a better chance of survival as mission commander and apparently, Taron's lover. If you remember how Terry Nation wrote Thal women in his original serial, you may wonder if we're in for some rough gender politics. Time will tell.

REWATCHABILITY: Medium - You know, this was my first Pertwee episode ever, and it has a special place in my heart because that's when we started to watch Doctor Who every day as a family (YTV was showing one episode a day around diner time). Objectively, it's a perfectly fine episode, though not a particularly innovative one. The highlights are the Doctor grieving for Jo, and Jo's grisly fungus make-up.
Doctor Who