November 04, 2012
"You know, for a man who abhors violence, I took great satisfaction in doing that." 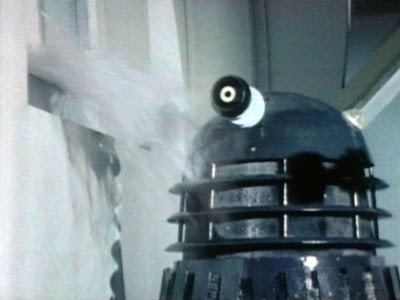 IN THIS ONE... The Doctor and the Thals escape the Daleks, but can they get up a huge ventilation shaft in time? Plus, ice volcanoes.

REVIEW: Part 3 indulges in the old Doctor Who trope of crawling through ventilation shafts to get to air ducts in order to get to another ventilation shaft, but it does it well. Unlike the escape and recapture games of Frontier in Space, here, getting in and out of the Dalek base requires a fair amount of cleverness, and doesn't immediately result into another capture, but instead, into more danger that must be overcome through cleverness. The Doctor putting a technobabbled cassette-tape on a Dalek's head to make it go crazy (we must wonder how much of Jo's voice is actually involved) is the weakest of these, but the Doctor and Codal having to go down deeper into the base's levels, Jo sneaking into the control center, the Thals (on film) inside the ice volcano's slush tunnels, and the finale where the Doctor tries to use heated air to updraft out of a big chimney, are all much stronger.

I'm not looking at the science behind the ice allotrope stuff lest it fall apart, but the viscous ice is visualized quite nicely (kind of like freezing shampoo). Just as you're wondering why an air duct with a simple grill would be built off such a tunnel, risking a slush overflow into the base, the Daleks order the vents to be closed, causing another danger for the heroes, and then spelling frozen doom for a couple of Daleks. These things have been pleasurably worked out. And speaking of Daleks, they're the best we've seen in a good long while. Nice suction cup action, and most importantly, their voices are just right. The amount of fuzz on them is what we think they should sound like today. They sound MODERN, and these are the voices that will most inspire future voicers in the future. And yes, we catch our first sight of the Dalek army made up of tiny off-model Dalek figurines, but only for a second.

Maloney continues to play on light and shadow, with some nice effects, like the Dalek shadows coming 'round the corner, but unfortunately, this is the episode that had to be recolored, and the contrast is at times so high as to overwhelm the image. Look at the Doctor when he's in the lift, for example, his purple jacket turning almost completely black. A small technical issue, but one I must admit distracted me at times. Had the episode been more brightly lit, it might have helped, but then we'd have missed out on the serial's atmospherics. So I'm not really complaining.

REWATCHABILITY: Medium - It's done well, but it's still an infiltration and escape episode. More than competent, but routine on a plot and character development level.
Doctor Who