November 05, 2012
"The moment that we forget that we're dealing with people, then we're no better off than the machines that we came here to destroy. When we start acting and thinking like the Daleks, Taron, the battle is lost." 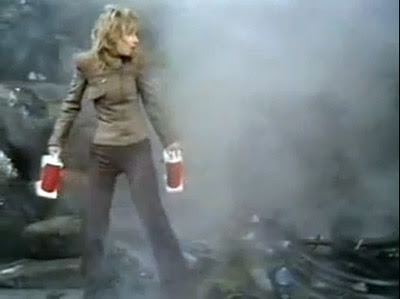 IN THIS ONE... The Doctor rises on hot air. Jo gets some bombs before the Daleks blow up with them. And the two are reunited on a field of rocks.

REVIEW: The escape from the previous episode continues (with no reprise, this is a relatively long one) as the Doctor and Thals ride a tarp up a shaft, with a Dalek in pursuit on an anti-grav disc (giving fans of the TV Comic a sudden hope of seeing Daleks flying around, alas), and an obligatory (and literal) cliffhanger at the very end. It's fun matinée-style stuff which Nation has shown some ability with in the past. Jo carries a little more of the plot, but she's also moving through waves of jeopardy and escape. She follows the Daleks to the Thal bombs - the Dalek base is a bit of a sieve, isn't it? - gets a random rock dropped on her head as she tries to disarm them, then wakes up just in time to grab the unarmed ones and run from the explosion. Stupidly, the Daleks rush back to the site and are destroyed. Couldn't they have had Jo throw the armed bomb at them, or something? It would have been more explainable and heroic.

But I'm not sure Nation wants girls to be heroic. Jane How (what a great name for a Doctor Who actress) doesn't quite play Rebec as scripted, showing a lot more resolve than her words alone would indicate. She's scared, if not terrified, and pretty ineffective. Or at least the boys all seem to think of her that way. Granted, Taron's motivation is sensible. Because he loves her - and Horsefall plays this well in throwaway moments - his command is compromised. He'd rather not have her there. Jo gets much the same speech from the Doctor, as she should have stayed in the TARDIS. The theme seems to be that girls aren't allowed to play with the boys. Obviously, had Jo stayed aboard the TARDIS, she wouldn't have befriended a Spiridon, spied on Daleks, or gotten the Thal explosives so it's hard to pin this old-fashionedness on Nation. In a sense, he's harder on the male characters, showing them to be patronizing and somewhat butch.

The Taron-Vaber conflict continues, of course, with Rebec as a new catalyst, and the young fool will head off on an explosive mission by himself and screw it up. The Doctor and Jo seem to disappear during the scuffle, apparently keeping well away from the cliché. The Doctor does have some nice advice for Taron that spells out the theme of every Dalek story, really - that in the fight between man and machine, man cannot start acting like a machine, or the battle isn't worth being fought. Daleks are about dehumanization, first and foremost, and at their most existentially terrifying, they force us to become like them just so we can oppose them. It's hard to follow that advice, however, when the Daleks raise the stakes by making a fast-acting plague in their lab that could soon be sprayed into Spiridon's atmosphere, a plague that might make the planet a little bit more hospitable seeing as it would kill its nasty plants and animals, more of which keep showing up to the heroes' shelter because nights are so cold on the planet. Has Terry Nation created there one of the worst planets in the universe? Someone should do a Top 10 list.

REWATCHABILITY: Medium - The character dynamics are in no way original, but Nation knows how to keep his audience interested with cliffhanger thrills.
Doctor Who