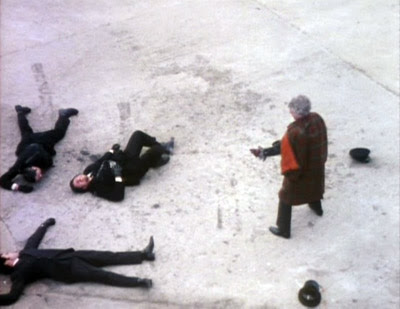 IN THIS ONE... Everybody goes down to the mines, though the Doctor takes a detour to Global Chemicals to knock a few heads together. Also, giant maggots.

REVIEW: Six-parter blues. Though we were off to a great start, there's not a whole lot happening in Part 2. Essentially, Jo and Bert trek through mine tunnels all episode, while above, the Doctor tries to get the tools necessary to fix the sabotaged cage and get down there himself. It's all so we can discover the mine is filled with glowing green waste (which we already knew), and that this sludge has apparently mutated some maggots so that they have fangs and are as big as dogs. Let's just say there's some disgusting CSO (and I don't just mean the maggots) before we're shown ugly (on purpose; they're well realized) maggot puppets. And that's it. The proof that this is trying to waste time is that the tools required to get down the shaft are found at a nearby garage after the Doctor's raid on Global Chemicals fails. More proof is how the Doctor, taking the same path Jo did, reaches her in a fraction of the time it apparently took her. It's the point at which the plot takes over and gets things done, don't ask too many questions.

To make us forget how thin the plot is, there's a bit of action in which the Doctor uses a crane (strike another vehicle off the Doctor's list) to go over an electric fence and into the arms of Hinks' thugs. It's a chance to use Venusian aikido (formerly karate) and get chased through an industrial-ish location, nothing more. It's still better than what Jo gets to do, i.e. repetitive walking through dark tunnels and remarking on the bad smell and green lighting. The Doctor actually gets quite a few witty moments. His interaction with Professor Jones is interesting, showing admiration (in a sort of patronizing way) after initially mistrusting this unknown hippie who might, after all, have sabotaged the cage's breaks in the name of activism. (It's just a glance his way, but you can read all of that in Pertwee's performance.) He gets some equally nice lines when facing Stevens, though the friendliness is far less sincere.

Oh all right, I'll concede that a few things are laid in here that will develop in future episodes. The Brig calls Yates on his radio, a character we haven't yet seen this season. Stevens' true "boss" makes an "appearance" as a disembodied voice - I wouldn't blame you if you thought it was the Master, the voice is quite similar. And evidently, the baddies have the ability to brainwash people into subservience. All given a small scene, promises made for future episodes in the serial.

REWATCHABILITY: Medium - It's a 5-minute story told in 25. What saves it is that the dialog is generally fun, the action bits keep the yawns away, and it all ends on a (somehow) iconic monster.
Doctor Who