November 10, 2012
"Your Bert - he was unique. In the whole history of the world, there's never been anybody just like Bert - and they'll never be another. Even if the world lasts for a hundred million centuries." 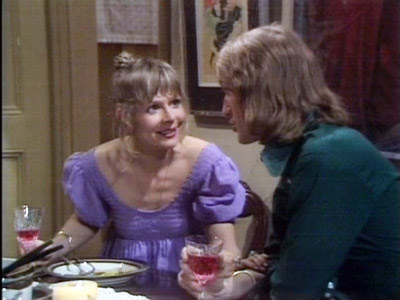 IN THIS ONE... Jo and the Doctor escape the mines. The Brig gets blocked by the PM. And Jo falls for Professor Jones.

REVIEW: In terms of plot, there isn't much going on - the Doctor and Jo escape the mines before toxic sludge is dropped on them and Stevens' brainwashed lackey Fell, uhm, falls to his death - but the character moments are what this is all about. Obviously, we know through hindsight that this is Jo's last story, so the production does its best to give her a fond farewell. The Brigadier is quick to defend her competence and his fondness for her, for example, and she's bright and enthusiastic despite having to close her eyes while navigating a lake of giant maggots (don't worry, darling, we'd do well to do the same so as to avoid the horrendous CSO). But obviously, it's the Jo - Doctor - Professor Jones triangle that we're really looking at.

It speaks volumes that Jo would prefer reading a book on the Amazon - Jones' next destination - than hear about how the Doctor got his hands on a Metebelis crystal. And feeling her slipping away, the Doctor does juvenile things like take Jones away for a science chat to keep the budding lovers apart. It's played with charm and humor, but also sadness. Pertwee's great in this. Despite what Katy Manning would later go on to say, as would the comedy piece on the DVD, Jones is a good match for Jo here. He is very Doctorish (just re-read the quote above the picture and tell me that doesn't sound like the 9th Doctor, but it really is Jones), and he teaches her that there are plenty of adventures to be had here on Earth. It's a metaphor for growing up and leaving childhood fantasies. You can see where Moffat got his paradigm from.

The Brigadier gets some attention too, and like the Doctor, there's a sadness about him. Professionally, he gets blocked by the Prime Minister when he tries to investigate Global Chemicals (I smell a government falling soon). Personally, he's forced to interact with a younger, looser generation that seems to make him feel old and out of touch. This is an episode that spends quality time in the Nuthutch having dinner, a place filled with scientists and artists (most "Nutters" appear to be both), two breeds of people he's never understood. It's like everyone around him is either the Doctor or Jo or both. And yet, they don't judge him on his smoking or military demeanor, they even invite him to stay for the night. He chooses the pub, his usual refuge when operating in the sticks. There's definitely a sense of something ending for all the principals.

REWATCHABILITY: Medium-High - The plot, thin as it is, is well used to advance the characters' personal stories. Some affecting work by Pertwee, Manning and Courtney.
Doctor Who