November 14, 2012
"A straight line may be the shortest distance between two points, but it is by no means the most interesting." 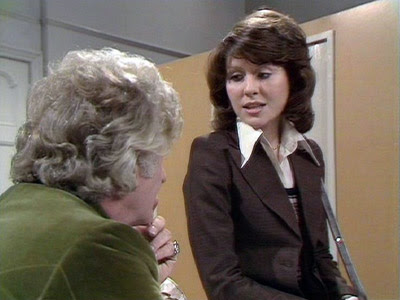 IN THIS ONE... First appearance of Sarah Jane Smith and of a Sontaran! In the Middle Ages!

REVIEW: As a new season begins, we're treated to a new opening sequence, and it's a great one. Gone is the four-color Bunsen burner, replaced by a cool slit-scan time vortex, a full-figure Doctor flying through it, and then a new Doctor Who logo, the so-called diamond logo that is actually the TARDIS seen from above. The series has gotten over the fact that it's "Now in color!" and is moving towards a more relevant iconography. And how long has it been since we've seen a story set in History? That was Season 5 with The Abominable Snowmen (though you may want to count The War Games instead, but I won't let you get away with name-checking The Time Monster and the highly fantastical representation of Atlantis it contains). Somehow, the show got away from its time travel roots, even before the UNIT era proper, preferring alien invasions in the present and the future, even though BBC resources could make historicals look so much more expensive. In fact, the Middle Ages look authentic enough, and there's even a real castle location.

However, the Doctor is still working with UNIT back in the present, investigating the disappearance of several scientists at the Brigadier's behest. And that's when he meets one Sarah Jane Smith, and things will never be the same, for the show and the fans, ever again. Right away, Elisabeth Sladen has a great presence, your eye going to her in every scene, even even if she's not yet the sweetie she'll later become. She's assertive, in your face, and takes no quarter. I was afraid we'd get a women's lib speech here, the way the production team talks about how they created the character, but no. I don't think it's too on the nose for her to bristle when the Doctor teasingly says she can make the coffee. There's some nice friction between the Doctor and his new companion - you could say they actively compete for attention - and he obviously loves testing her, perhaps even aware that he's found his new Jo Grant. But while Jo needed to be taught to be a capable adventurer, Sarah Jane only needs to be convinced. She gets into the TARDIS well on her own, and surprisingly, we don't really get a scene where she realizes the thing is bigger on the inside, only her walking out slightly mystified and carrying on. She's all about the facts, so naturally theorizes a logical reason for the Medievals that - oops - attack her, and her interference may well have saved Irongron from Hal the Archer (Boba Fett, everybody!). Has she changed history? Or was it already compromised the minute an alien spaceship touched down?

But wait, there's another first! Bob Holmes introduces his greatest legacy to the series, the Sontarans. Well, only one Sontaran, Linx, but he makes an immediate impression, both in armor and without the helmet (worth the cliffhanger sting, love the tongue breathing). Though the make-up is technically more primitive than the new series', I may like it more, and it's certainly better than any of the other classic Sontarans'. And he doesn't seem all that shrimpy either. When it was eventually said the Sontarans were short, it was news to me, because I remembered Linx best, and even the camera likes to shoot him from below, or others from down over his shoulder. This guy falls to Earth alone - neat ship design, for once not a saucer or rocket - and immediately claims the planet as part of the Sontaran Empire. In full view of armed knights. That takes some nerve. He can back it up with weapons, handy brainwashing equipment and apparently, Time Scoop technology, which make his plans slightly convoluted (not sure I buy it), but brings him in conflict with his host often. Irongron is boorish, filthy and violent, but he basically has the same ambitions on a smaller scale. They make great frustrated allies. And on the other side of the Medieval conflict is Sir Edward, or should I say his wife, another strong female character like Sarah Jane, the real power, wisdom and courage behind her husband's throne. Holmes really comes into his own here and provides far more than his earlier strings of set pieces (the Auton stories and Carnival of Monsters), a much tighter package with plenty of wit and personality.

VERSIONS: The enhanced CGI option on the DVD includes a very nice sequence for the Sontaran ship tumbling to Earth, also replacing its landing in Irongron's window with something prettier. More expectedly, they add a beam or glow (depending on function) to Linx's wand weapon, and an effect on the Doctor's delta particle detector.

REWATCHABILITY: High - The various firsts alone are worth the price of admission, but it looks cool, sounds great and gets you smiling too.
Doctor Who