November 16, 2012
"Yes, well the definition of the word 'humanity' was always a rather a complex question." 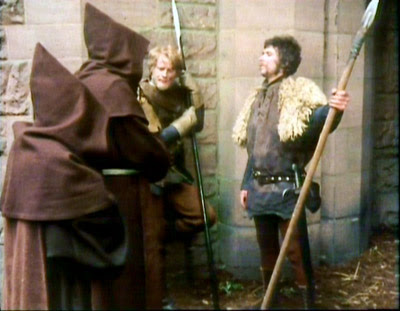 IN THIS ONE... The Doctor helps Sir Edward against Irongron, which ends in a raid against the latter's castle.

REVIEW: I'm gonna go ahead and say director Alan Bromly doesn't really know what to do with action set pieces, based on these last three episodes and my memory of his other serial, Nightmare of Eden. Whenever he's called to shoot action, there's a lot of running in circles, and noise to cover up the fact there really aren't a lot of soldiers to throw into the fray. The siege of Sir Edward's castle, for example, while it features a lot of cleverness on the Doctor's part - dummies and stink bombs - seems Pythonesque in its scope. Thankfully, that's not what Doctor Who is really about.

Finally, the Doctor tells Sarah Jane what's what and manages to charm her despite a few sexist comments thrown in her direction. Since he never said anything of the sort to Liz or Jo, for whom Holmes also wrote the first story, we'll have to assume he's doing it on purpose to get her dander up. Perhaps the biggest surprise is that, aside from one comment about the "masculine arrangement", she doesn't really take him up on it (and that's to her credit). Looks like Doctor Who's "first openly feminist companion" is more something the production team likes to talk about than anything overtly done on screen. He's teasing her, and otherwise, he's calm and charming and wise. The third Doctor is a lot more at peace than he was in the early days of the UNIT era when he might bite your head off at the slightest of foolish comments. And it's clear he respects Sarah Jane's gumption and ability to get in the noble house's good graces so quickly. She's companion material all right, and the two of them have some nice banter going.

In fact, Holmes' dialog is a highlight. The locals use a cod-Shakespearean vernacular that's colorful and literary, especially when they're being insulting. One of Holmes' trademarks, only now really developing, is the concept of the comic "double act". He likes to pair up characters that will spark humorously against one another. In a sense, that's dictated by the format, because that's how the Doctor and his companion relate, but he mirrors that elsewhere, here in Irongron and Bloodaxe, a master/sidekick duo that are so uncivilized as to be funny. Poor Bloodaxe. He's really quite dim, to a point where Irongron himself can't quite believe the man's simpleness. But I think the sycophancy is sincere. He really does think his leader is awesome. As a result, he seems rather good-hearted for an evil knight, just going about his business and following orders. Their relationship is contrasted to the fraying alliance between Irongron and Linx, the alien who has finally lost patience with the Medievals. They are so primitive, they even fail to give his sadism any satisfaction. And those big back slaps Irongron keeps giving him are just annoying (for him; for us they're hilarious). There's almost another double act in the badly acted guards who think they're having fun at a pair of monks' expense, but they're only deserving whatever fate awaits them in Part 4. The Doctor and Sarah Jane easily infiltrate the keep that way, perhaps taking their cue from a Meddlesome member of the Doctor's people. Everybody trusts a monk!

VERSIONS: The enhanced CGI option on the DVD adds a red beam on Linx's wand at the very end.

REWATCHABILITY: Medium-High - Some cracking dialog, fun characters, and the new companion warming up to the Doctor diverts us nicely from poorly-staged action scenes.
Doctor Who