November 17, 2012
"These knaves of mine aim so ill, Doctor, that you are mayhap safer to stand still." 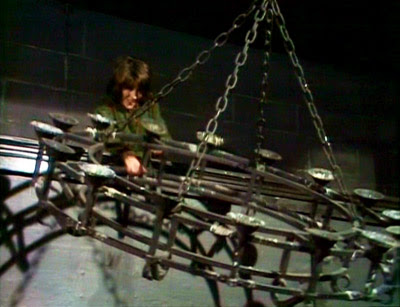 IN THIS ONE... Sarah Jane puts the castle to sleep, the Doctor dresses as a mechanical knight, and Linx's ship blows up.

REVIEW: In true Doctor Who fashion, the Sontarans have a "common weakness" even a blind old bat like Rubeish can capitalize on - a probic vent at the back of the neck which you can just hit to knock them out. This is important in Who, because the heroes are rarely physical threats (even though this Doctor can fend off two warriors with a single sword, while wearing heavy armor) and the show is often about English resourcefulness and the Amateur's triumph over the Specialist. Indeed, we have a character very nearly called "Rubbish" landing the knock-out blow that saves the Doctor's life, while holding a makeshift lens to even see where he's going. That is pure Doctor Who to the point of being meta-textual. Writer Robert Holmes also brilliantly makes the Sontarans' weakness an integral part of their personality. Because of their Achilles' heel's position, they must always face their enemies. Sure, that short-sightedness is patently ridiculous (especially since Linx turns his back on enemies ALL THE TIME), but for a cloned, and thus replaceable, warrior race, it makes thematic sense. Regardless, I have to say, I love his hand-to-hand fighting stance.

Holmes also caters quite well to Miss Sarah Jane Smith, not only giving her lots to do - infiltrating the kitchen staff, putting sleeping potion in the pots, rescuing the Doctor by unhooking a chandelier (fun swashbuckling bit), and even jumping Linx if his wand is trained on a friend (she saves him at least twice just this episode) - but also giving her a reason for the feminist rant the production team ordered for the character. A poetic reason, an entertainment reason, a writing reason, but a reason nonetheless. After she tells the kitchen slaves that they should rise up against their male oppressors and not getting a favorable reaction, she asks if they're living in the Middle Ages, before she actually catches herself. Pure Holmes wit, and it makes what would otherwise be an annoyingly strident moment (see The Time Monster's Dr. Ruth for an example) totally worth it.

The dialog is good throughout, but Holmes has also gotten better at plotting. In previous efforts, in particular the last two, Terror of the Autons and Carnival of Monsters, Holmes was content to string along various set pieces, any of which could have been removed without affecting the story. In The Time Warrior, his approach is more mature and he thinks about the nuts and bolts of his story. The robot knight, a throwaway to pad out a serial in lesser hands, is here used as a disguise for the Doctor. Hal the Archer could have been just another ally, but it's his very skill with archery that defeats Linx by having an arrow fly true to the Sontaran's probic vent as the door of his ship starts to close. So did Hal or the probic vent come first? Irongron is painted as a superior example of Middle Ages humanity (compare him to the retiring Sir Edward or the dim Bloodaxe), and so he can resist the sleeping potion through the Kirk Principle by which the toughest "hero" in the room is always the last to succumb and the first to rise, even though Spock is in the room. We need Irongron to resist because he deserves a real death, which comes at the hands of Linx. And Bloodaxe is correctly characterized as superstitious and easily panicked, so that in the final moments of the episode, he can make a run for it with his men without questioning Hal's word, limiting the death toll to those who truly deserve it. The economical plotting extends to the ending as well. Holmes doesn't give us an epilogue in which the TARDIS returns to the 20th century, one quick farewell with Rubeish being more than enough.

VERSIONS: The enhanced CGI option on the DVD adds the usual red beam on Linx's wand, and an actual shot of the castle exploding. The latter looks very CG, especially the fire, and isn't any angle on the castle we've seen elsewhere, so it really calls attention to itself. The Target novelization is mostly by Terrance Dicks, but Robert Holmes did write the prologue in which we discover how and why Linx was forced down to Earth.

REWATCHABILITY: High - Even the action bits work in this tightly plotted and wittily written finale. Satisfying on every level.

STORY REWATCHABILITY: High - Even if this story didn't introduce Doctor Who's most beloved companion (or can I just say, character?), AND a major alien threat (the Sontarans will actually never be this cool again), AND reintroduce the pseudo-historical as an exciting and viable option, it would still be one of the era's best stories. Fun, smart and lean. Sarah Jane is off to a great start. I hope rubber dinosaurs can't slow down her momentum...
Doctor Who