Doctor Who #362: Invasion of the Dinosaurs Part 1

November 18, 2012
"No, it doesn't work." "Probably been vandalised." "That's a very unfair word, you know. Because actually the Vandals were quite decent chaps." 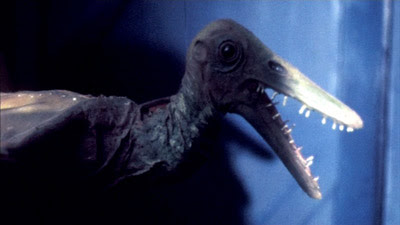 TECHNICAL SPECS: This story is available on DVD. The first episode was actually called "Invasion Part 1", so as not to reveal the nature of the threat. First aired Jan.12 1974.

IN THIS ONE... The Doctor and Sarah Jane return to London, but it's deserted except for looters, the army... and dinosaurs!

REVIEW: This starts out with a real bang, as the camera moves around a deserted London where the animals seem to have taken over. Birds chips above empty streets. A dog sniffs around an empty car. Toys left on the playground. And just the vaguest wisp of a soundtrack under these images. It's what The Web of Fear wanted to do but couldn't, and it's The Dalek Invasion of Earth, but without the distance of it taking place in the future. No, we're in contemporary London in crisis, a page that would be copied often in the New Series, but which really dates back to The War Machines. Here, it finally feels modern. It has scope. It does take its time, as the Doctor and Sarah Jane look around, trying to find clues as to what happened. Even when we rejoin UNIT HQ, Malcolm Hulke's script plays coy and won't reveal just what the real threat is. The looters are a detail, the real danger is merely represented by push-pins on a map. But it's deliberate delay that makes it work, that builds the tension, and that makes the sudden appearance of the monsters so effective.

Case in point, the pterodactyl attack. On film, in heavy shadows, this flying puppet is terrifying! It's a horror movie moment, a moment of shock and surprise, and genuinely fierce. Kudos to director Paddy Russell whose The Massacre has been lost, but who shows here the same Gothic horror sensibility she'll put to work later on Pyramids of Mars and Horror of Fang Rock. The T Rex isn't quite as gorgeous - certainly the lighting doesn't help, nor does its cartoonish anatomy - but the mix of models and puppets works fine, not too far away from the Godzilla movies of the 60s. I'll say this: We're really far from the CSO nightmare I was expecting based on the serial's premise. The first dinosaur encountered is just a roar in the distance, and is never seen, but it is notable for smashing a looter's car and killing him, a genuinely gory shot that disturbs our heroes, and perhaps the moms at home back in the day. So if the dinosaurs have trouble seeming real in spots, the danger they represent certainly doesn't.

If there's a weakness here, it's that Hulke is pulling the same padding tricks he did in Frontier in Space, as the Doctor and Sarah are captured by the army, forced to suffer through a kangaroo court, stage an escape, and are immediately re-captured, all before the Brig can spring them legally from custody once their mugshots have shown up on his radar. There's plenty of good interplay between the characters, and on the part of the Brigadier as well, and a brief, but well-staged fight scene for the Doctor, but structurally, it's Hulke playing to his weaknesses and not his strengths. It's perhaps a good thing that the Doctor is more patient with authority than he used to be. Two or three years earlier, and the dialog would just be scathing insults on both sides of the equation.

VERSIONS: The DVD's re-colorized version of this episode - the only episode previously unavailable in color - has a distracting, shimmery look, so the've also included the black and white version, which may be more to any individual viewer's tastes.

REWATCHABILITY: Medium-High - If it sounds like Primeval stole this set-up wholesale, it's because it did. This first episode uses its slow pace to build atmosphere, and the monster effects range from acceptable to very effective. Shame about the padded capture-escape-recapture bits.
Doctor Who