Doctor Who #363: Invasion of the Dinosaurs Part 2

November 19, 2012
"That creature has an amiable disposition, Brigadier, and a brain about the size of a walnut." 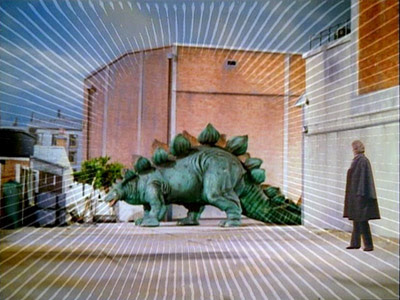 IN THIS ONE... Temporal anomalies, the Doctor makes a stungun to knock out dinosaurs, and Mike Yates betrays us all!

REVIEW: The CSO nightmare begins, with UNIT soldiers clearly not shooting in the right direction to hit the T Rex puppet, but that's really the worst of it. Otherwise, the effects are still not as bad as reported. The stegosaurus and apatosaurus look pretty good, and there's a cool sequence where a Medieval peasant disappears during an action sequence with no visible cut. It's really too bad that the T Rex puppet is the worst even beyond its inability to interact with people, with terrible anatomy and a stiff head (though the dripping saliva is a nice, if almost invisible, touch), because it's bound to get a lot of use. It's the most iconic prehistoric monster, after all.

Thankfully, the Doctor and Sarah Jane aren't kept prisoner for much longer, as the Brigadier shows up to bring them to UNIT HQ. How he finds them is glossed over with comedy, as the Doctor almost Venusian karate chops him upside the head. At times, Pertwee plays the comic scenes sightly over the top, but it's the comedy that makes the episode such a pleasant experience. There's the Doctor labeling Sarah Jane his assistant so she doesn't get evacuated, but apparently not expecting her to take to the role so seriously and leaving her to chat up Mike Yates. Her harder edge is already gone, and she takes things with a good deal of humor, but also contributes, asks pointed questions, tries to work things out, etc. After the Doctor explains his plan to Yates, he's unwilling to info-dump all over again for Sarah - one cabbage-head per story is quite enough - and rushes to lock the door so he can finish his stungun in peace, only to turn around and find the Brig has walked in through a different door to ask those same old questions. A bit of fun at the expense of the show's most common tropes.

The serial has its share of human antagonists, the most obvious being General Finch, a prime interferer as legally required for all UNIT stories. The fact that the Doctor embraces the bureaucrat Grover, a character who would normally have served the same function as Finch, is a bit of a twist, but don't expect him to stay on the side of good for long. The Doctor likes him because he's a champion of the Environment, but isn't this situation, with a deserted London and extinct species coming out of temporal anomalies right in his wheelhouse? The real twist then is that Mike Yates is working with the baddies. We know he took some leave after the events of The Green Death, needing a rest after being brainwashed by the BOSS, fighting giant maggots and losing Jo to a bleeding heart hippie. But he still seems off, telling Sarah he likes London better as an animal sanctuary, though it's ambiguous from Richard Franklin's acting (it's always a bit "off"). It's still a surprise when he shows up at the secret lab where sociopathic/misguided scientists (played by familiar Doctor Who faces Peter Miles and Martin Jarvis) are working on Operation Golden Age. It's pretty cool that with the UNIT era soon to end, the production has decided to do the unthinkable and allow a UNIT character to betray the family. And while Mike's motivations are still unknown and may be suspect, it's done without turning him into a villain. He refuses to do anything that could hurt the Doctor, and only bad luck puts his friend in danger. The UNIT era has added a gray scale to the Whoniverse (starting with the bombing of the Silurians), and this is a natural extension of this idea.

REWATCHABILITY: Medium-High - Shocking revelations about a continuing character, some cool (and not so cool) effects, and fun comedy to hold it all together.
Doctor Who