Doctor Who #365: Invasion of the Dinosaurs Part 4

November 21, 2012
"I agreed to sabotage the Doctor's apparatus and delay his experiment. But I didn't agree to murder!" 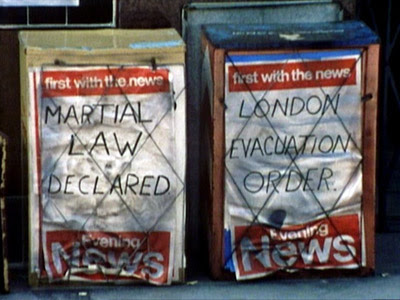 IN THIS ONE... While Sarah is on her way to another planet, the Doctor sneaks around the baddies' bunker. First appearance of the Whomobile.

REVIEW: After three solid episodes, the padding finally hits the fan. Though they try to give us something special this time around too, there's just no avoiding that nothing much happens in this one. Air time is mostly taken up with the Doctor's search for Sarah Jane/the hidden bunker, interminable sequences of him driving and sneaking around, being watched, turning back, oh and a fight with a pterodactyl for good measure, just not one that looks or sounds good. The attack in Part 1 was moody and scary. This one comes off as silly. Part of the problem is that the serial has done all this already. We've had the fight with the pterodactyl. We've had the visit to the Minister's office where he claims there's no underground bunker. We've been down there, with Sarah instead of the Doctor. And we've had someone turn traitor as General Finch inevitably does here.

So what's new? Well, the bits with Sarah Jane, only seemingly on a 3-month, interstellar trip (her bruise may or may not tell a different story). The people on the sleeper ship with her are famous enough for her to recognize them - philanthropists, athletes and artists - and all of them are environmental nutters who want to start fresh on a pure planet where they hope to "guide" the primitive natives. So they're IMPERIALIST environmental nutters. And by "nutters", I aim to separate them from any kind of sensible green movement. These guys have a reprogramming room that shows documentaries about pollution on a loop, and plant to "destroy" Sarah if she proves to be a disruptive influence. Also new is the Doctor's Whomobile, making its first appearance, and a complete indulgence. Pertwee loves vehicles, and he purchased this one to use in the show, so of course, it must be used even though it doesn't appear to be any faster than Bessie. It gets more features later, but it's still an extreme example of a Bondian gadget for the Doctor, and one that seems completely irrelevant to the story.

What the slow, redundant or irrelevant elements do is obscure the fact there's actually an intriguing mystery here. What ARE the conspirators up to? The Doctor seems to think the dinosaurs are just a distraction (that's QUITE a distraction!), and that the real goal was London's evacuation. But what for? And how does the spaceship(s), real or faked, have to do with it? And on top of that, why is Captain Yates working with them? The questions are piling up. And not just the snarky ones, like how did they remove mechanisms from the broom cupboard elevator so quickly, or how does Jarvis' character find time to be both a lab assistant and the M.P.'s chauffeur, or even, and this is the big one, why they believe they can frame the Doctor so easily. Maybe Yates WANTS them to fail after they've misled him so often.

REWATCHABILITY: Medium-Low - Despite the Whomobile introduction, which some may consider "historic", this episode is quite skippable, adding very little to our understanding of the situation, and steadily losing momentum from scene to scene.
Doctor Who