Doctor Who #366: Invasion of the Dinosaurs Part 5

November 22, 2012
"Their new world is this one. This world of ours swept clean and returned to its early innocence." 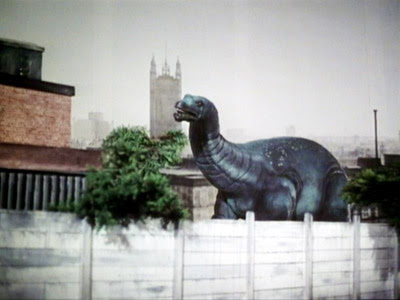 IN THIS ONE... Sarah Jane gets off the fake spaceship (but is soon caught), the Doctor escapes custody (then drives around a lot), and the villains step up their plans to erase the human race.

REVIEW: So finally, we get a sense of the entire evil plan, and it's completely INSANE. And that's how I like my evil plans, epic and nutty. They basically want to roll back time, erase the human race from Earth, and start over with cavemen and their select lot who all believe themselves to be colonists on a spaceship. The primeval world they'll find is really a renewed Earth! No word yet as to why Mike Yates is ok with this (he likely doesn't know since he didn't "sign up for murder"), nor why evacuating London is so key to the plan. The dinosaurs really are just a distraction, some other application of Whitaker's time technology (given the show once had a show runner known for his skewed take on science, this is an entirely brilliant name for him). And hey! Finally a look at the triceratops puppet!

As we rejoin the action, the Doctor has just been arrested by Finch and the Brigadier, leaving us to wonder on who's side the latter really is. However, unless he's written completely out of character, it sounds like he's going along with Finch until he can figure out what's going on. No so Yates, who finally shows his hand by shutting the Doctor's plea for help down. So it's down to good old Benton to not only allow himself to be Venusian nerve pinched, but to suggest it! No wonder he's such a beloved character. The Brig then drops all pretense and joins the to-be-court-martialed Benton in an insurrection against the military. Yay! Sadly, we don't see them again this episode and are instead given long and rather leisurely chase sequences as jeeps and helicopters zero in on the Doctor's getaway vehicle. There are some nice shots in there, and a neat roofless warehouse location, but it's mostly driving in circles and trying to avoid hitting walls made of pure padding.

Sarah Jane Smith is once again a major draw, going on logic and faith, she disbelieves that she is, in fact, on a spaceship, almost convinces Mark, a potential ally (and a highly suggestible one, it seems), and walks out of an airlock into space. It is, of course, the secret bunker, but it still takes balls. As the script puts the breaks on the story in the middle section, Lis Sladen somehow manages to keep Sarah's sneaking around in real time relatively tense, just by using body language. She taps her arm nervously as the lift goes up, she's careful when turning doorknobs... Some great naturalism and attention to detail from her, and something we can look forward to from her across her time on the series. I'm even content to watch her write a note while a bemused officer looks on silently. Of course, Hulke pulls one of his "reset to zero" tricks by having her trust Finch at the worst possible time and get herself captured again. It's not unlike Frontier in Space in that sense. But now everybody knows who's a traitor right, and this can stop? I guess Part 6 could still have Sarah trust Mike Yates at the worst possible moment...

REWATCHABILITY: Medium-High - The plot is satisfyingly bonkers, and Sarah Jane, the Brig and Benton are pretty great. That leaves a huge chunk of padding in the middle to get over.
Doctor Who