November 26, 2012
"Now that must be one of the seven hundred wonders of the universe." 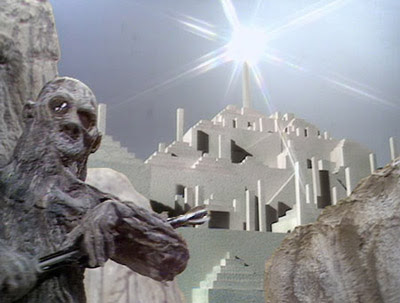 IN THIS ONE... Sarah makes an Exxilon friend, the Daleks do battle with root-things out of War of the Worlds, and it's off to the City to play Indiana Jones.

REVIEW: In Part 3, the Daleks are reduced to cannon fodder and pursuers, basically obstacles in the heroes getting things done rather than main antagonists. The Marines are trying to mine the plague-ending chemical, but the Daleks are harsh supervisors and planning to kill them before they can leave with the medicine. The Doctor and Sarah want to help the humans achieve their goals, help the Exxilons get their society back on track, and restore power to the TARDIS, all of which can be accomplished by disabling the Exxilon city's power-draining beacon, but they've consistently got Daleks at their heels, pushing them forward. Is there a main antagonist? I guess it's the City (and its "root" monsters), but the High Priest's Exxilons and treacherous Galloway are dangers too. So while they're not germane to the plot, we can still appreciate the Daleks' death scenes. One's fight with a very long "root" is impressive - visible wires and all - and features a high fall for a Dalek. I'm less impressed with the villains' motivations in any given scene. I get their general agendas, but the "mining" scene treats them horribly. Galloway becomes phone shy at the idea of making more demands on the High Priest (an off-stage non-character by this point) for no real reason, and the Dalek just runs off ranting that he will obey. Let me threaten you as I race off in no particular direction. What's that all about? But these are Daleks who shoot everything out of panic, waste ammo and, in a previous episode, even started firing wildly even though they knew nothing was going to come out of their gun barrels.

On the other side of the ethical divide, Sarah Jane makes nice with the Exxilon Bellal, but not before Lis Sladen indulges in some fine character detail. She plays Sarah as terrified if not traumatized (she was recently drugged and almost sacrificed by these aliens), and surprises herself by touching Bellal's arm, then withdrawing quickly at the ick factor. It's those little things that takes the edge off the monotony of companions' being afraid all the time. Sladen puts a lot of variety into that one emotion and keeps surprising her audience with small touches of realism. I'm less enthused about Pertwee's performance. It's pretty indulgent to have the Doctor goad the "root" on with lines from Hamlet, and though he's genial and even touching in the scene where he and Sarah part ways, his touching her face to quell her protestations feels very awkward. The intimacy he shared with Jo hasn't been earned yet when it comes to Sarah Jane. I just can't tell if I should blame the writing, the direction, or the acting. Bellal, at least, is an engaging character, the first in this whole story (please, Daleks, shoot Jill already). It's hard to put on a performance with a rubber mask on your face, but the design does a lot of the work. He's small and has big eyes (and softly pulsating markings), which is enough to broadcast friendliness. He's also better able to give us relevant info-dumps about the true nature of the plot, including how and why the City is lording over Exxilon, and that his people apparently helped the Mayans build stuff on Earth. Doctor Who continues to indulge its 70s fascination with von Danikenism.

Now though the main plot is really about defeating the City's defenses, it's when the Doctor and Bellal (and the Daleks) get to it that Terry Nation loses the plot. Consider the puzzles the Doctor is confronted to get in and continue his "dungeon crawl". First is the thing with choosing a symbol on the outer wall, complete gobbledygook on the best of days, but here played off-screen. While we're distracted by oncoming Daleks, the heroes are suddenly inside the City. Cop-out! Then comes a relatively simple maze on the wall. Fun to see today's ubiquitous touch screens in a 1974 story, but otherwise, looks pretty easy to solve. So the Exxilons whose all-too-human skeletons are strewn about must have been pretty stupid. And then there's the final trap, which causes the cliffhanger sting: A red and white floor! Oh my! How are the kids going to sleep this week waiting for the next episode?!

REWATCHABILITY: Medium-Low - The bits of spectacle (Daleks going boom) are what you watch for, but a lot of things weren't thought through thoroughly.
Doctor Who