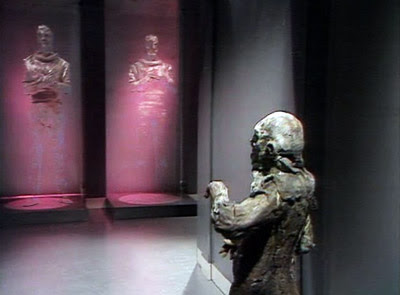 IN THIS ONE... The Doctor and Bellal navigate the city's puzzles, the Daleks blow the beacon, and Galloway sacrifices himself for the greater good.

REVIEW: Despite the many plot threads going on in Death to the Daleks, the last episode manages to pad things out at the detriment of some of them. The Doctor and Bellal (and the Daleks') exploration of the city might have featured even more puzzles for them to solve and lasted an extra two episodes of tedium. Each one is as anti-climactic as the next, and half are seen twice, once for the heroes and once more for the Daleks. If they're anti-climactic, it's because they're never solved in a way that's fair to the audience. The electrified floor tiles, for example, have no legitimate pattern. The Doctor waves his screwdriver above them and makes his choices, then has Bellal jump the same hoops, except his feet DO touch the wrong tiles, and there's no effect. Showing us the tiles' effects AFTER they've gone through the course removes any possible suspense this game of hopscotch could have offered. The Daleks' run through is more entertaining, but since it has no effect on them... Then there's a room that turns Bellal into a killer (by a loud sound the Doctor nevertheless fails to hear), but he's easily snapped out of it by more screwdriver action. Then there's a room that throws Top of the Pops effects at you to drive you mad. The only surprise is that the Doctor instinctively knows what the next test will be (because he has to tell the audience as it's too abstract a notion), not that his strong Time Lord mind can survive the assault. Bellal also makes it through with a minimum of fuss, so what's the big whoop? It might have been interesting to see the Daleks beat these psychological tests, but it's conveniently ignored instead. And in any case, why DOES the city have these tests set up? Even the mysterious Exxilon watching the action from the control room turns to dust when the heroes come in. Throw in some "anti-bodies" to stop the Doctor from making the city computer go insane, and they'll predictably fight it out with the Daleks instead (punching Daleks sounds cool, but it looks really silly).

Speaking of the Daleks, they were simultaneously sending Galloway and Hamilton up on the beacon to blow it up. This is a cool sequence, starkly lit and precariously shot (as these things go), but the twin missions are highly redundant. By the time the city melts (!) under the strain of failing systems (I'll throw the production a bone and surmise that it was made of self-repairing nanites that dissolved the structure when the computer brain melted down), the beacon has already been blown and powered restored to the ships and the Daleks. It makes the Doctor's whole padded-up adventure irrelevant, especially since there's no epilogue showing how the Exxilons are now free of their "god". There's a third mission, and that's Sarah Jane's to insure the humans can leave with the plague-curing chemical which the Daleks are planning to hold for ransom (it's implied that they caused the plague in the first place). Sadly, Sarah is largely side-lined in this episode, and her clever ploy quickly mentioned as a reveal. What we do see is a lot of crawling around in the dark and colluding with Jill (whose performances continues to misinterpret her lines' intent). When a Dalek realizes the girls have flown the coop, it commits suicide. Embarrassingly stupid.

But there's a real disconnect between what must happen in the plot and the characters' motivations and attitudes navigating that plot. It's not just suicidal Daleks or Jill smiling when she should be showing concern. There's Galloway too, who is set up as a man more ambitious than altruistic, who would probably sell out his own crew to the Daleks to save his skin and get the glory. Despite his captain's protestations, and his "mishearing" his last order which would have given command to someone else, I just never bought it from the performance. A gruff, pragmatic soldier, sure. An ambitious glory-hound? No. And the script agrees with me. In Part 4, Galloway is following the Daleks' orders until he sees his chance, keeps a bomb for himself (just how he pockets it is a mystery), and blows up the Dalek saucer (they try to play it as a surprise, but geez, you'd have to be blind not to see it), sacrificing his life for his crew and the plague-ridden systems they're on Exxilon to help. So was Galloway's commanding officer wrong about him? An unmotivated change of heart? A scripting mishap? A lot of the latter going around, so that'll be my guess.

THEORIES: The mention of Venusian hopscotch in this episode leads me to finally ask, why Venus? On the surface, it's one of the 3rd Doctor's tics and has the same basic function as "reverse the polarity of the neutron flow". It's an easy-to-remember bit of bafflegab where a variety of alien planets might have been referenced. So we've had Venusian aikido and karate, the shanghorn (a type of animal), units of measurement, lullabies, and now, hopscotch (using only the 3rd Doctor references). So obviously, he's been there. In our relative future, once the solar system is colonized by humans? Or our relative past or present, with "alien" Venusians once or still living on the hothouse planet (just as the Ice Warriors do on Mars)? The Missing Adventures novel Venusian Lullaby answers the question with a 1st Doctor tale set on Venus in 3 billion B.C., and though for him it's just after he's left Susan in The Dalek Invasion of Earth, the book makes reference to pre-Unearthly Child visits to the planet made with Susan. Why is it so key to the Doctor's third incarnation though? Perhaps if each person has one or more defining moments in their lives, and Time Lord incarnations inherit another "person"'s moments, each will feel connected differently to any given moment. The 3rd Doctor's personality, created in regeneration, if you will, may have sprung (at least partially) from events experienced on Venus. Learning their martial arts, for example, is brought to the surface, and an apparent longing for this Burroughsian place and time ingrained into his mannerisms. It might be an interesting exercise to find moments in past incarnations (hopefully ones in the actual canon) that serve as a psychological springboard for later Doctors, though I'm not sure I'm the man to attempt it.

VERSIONS: The Target novelization follows the serial pretty closely. Up to you if the Dalek guns in Death should be called "machine guns".

REWATCHABILITY: Medium-Low - When everything must be resolved, it resolves into a mess that spends too much or too little time on the wrong things.

STORY REWATCHABILITY: Medium-Low - At least one cog in the machine is completely irrelevant, I'm just not sure which. Either the story doesn't need the Daleks, or it doesn't need the living city, or maybe it doesn't need the tribal Exxilons. It's got spectacle, but plotting, editing, acting and sound design are all too rough an unfocused to tie everything together in a neat package.
Doctor Who