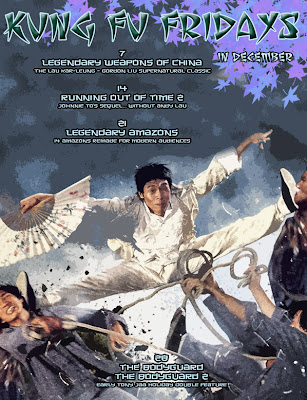 I don't know what I'm doing for Christmas. Staying home or leaving town. But last year, I didn't schedule anything during the holidays, and then wound up staying just as most of my KFF crew did. We could have been enjoying Asian cinema all along! Well, not this year. Here are the movies I'll be showing...

Legendary Weapons of China - Been a while since we watched something by my favorite Shaw Bros. director, Lau Kar-Leung, and he assembles for this supernatural Boxer rebellion story, all the actors he loves to work with including my man Gordon Liu, my young auntie Kara Hui, and mad monkey Hsiao Ho (my pick for poster star this month). It's gonna be so awesome.

Running Out of Time 2 - We're watching the first film TONIGHT to round out November, so the sequel is a natural selection. No Andy Lau this time around, but it's still Johnnie To at the helm, and he never delivers a turkey. I'm sure he can once again bring something interesting to the cops and robbers genre.

Legendary Amazons - I really liked the Shaw Bros.' 14 Amazons, but it was a film I had to watch alone (sometimes the crew is too busy with life). Here's their second chance at the story, the 2011 Jackie Chan-produced epic using the same historical material about a clan of women warriors. It's got a huge cast that includes such favorites as Cecilia Cheung, Cheng Pei-pei and Wu Ma.

The Bodyguard 1 and 2 - Yes, a double feature from Thailand, wire fu comedies by the Tony Jaa stunt team, starring comedian Petchtai Wongkamlao (the funny cop in The Protector). Jaa has a cameo in both, the second actually a prequel to the first. This can't be anything but good fun, am I right?

As usual, you can expect capsule reviews to follow each in This Week in Geek, or you can drop by and share the communal experience of reading subtitles and not crinkling your damn bag of chips during the death scenes.
Kung Fu Movies