November 16, 2012
Being an update on the polyhedral profile our favorite dice: The recently found, ancient d20! 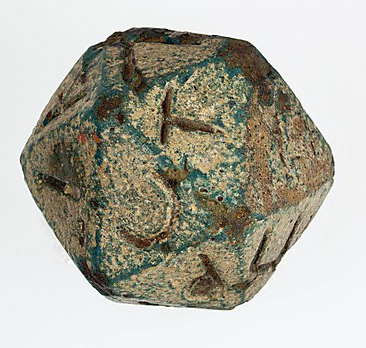 Back in June of 2010, this very blog said the first known 20-sided die was from the 2nd century A.D., in the British Museum's collection. But it seems - and I'm not sure why this has only made the news recently - that the Metropolitan Museum of Art has an even older one, from Ptolemaic Egypt (so very roughly dated between 304 and 30 B.C.). It's got Greek letters on it, so I'm thinking... Scattegories?

Elsewhere on the Internet, Amanda Kooser likes to imagine the Ancients playing some version of D&D. And note how her article, and io9's too, feature a markedly less stressed d20. Wrong die (say, the 2nd century A.D. one)? Or time travel shenanigans?
Dice RPGs Websites