November 09, 2012
Why AM I thinking, questioning the path I've set for myself already in THIS post, dated April 11th and specifically called "Annual". It hasn't been a year yet! But our current game's irregular schedule and structure of one-shots over campaigns has allowed for the possibility of doing other stuff in between the gaming we've committed to.

Hong Kong Action Theater has provided some fun sessions in a variety of genres, and since it's the only avenue available (right now, anyway) for the more irregular gamers, I'm in no way dropping it. We still have a few Kung Fu films we want to create. But at the same time, I've been trying to gear the group to a point where I don't have to GM every single game. With multiple GMs, not only would I get the chance to PLAY (which I almost never do), but we can run sessions more frequently and regularly, switching games and campaigns from week to week. For example, I've encouraged one player to run the Mass Effect clone he's always wanted to run, using Savage Worlds, and another to possibly start an In Nomine campaign, which is a game he has experience with. I've got character concepts in my head for both, but we haven't gotten to chargen yet. HKAT, ME, IN, and maybe supplementing that with an odd game of DC Heroes Team-Ups Brave and the Bold style, something I've wanted to try, and we'd have a well-rounded month's rotation of weekly games.

It's also become clear that while I initially started the HKAT game to include a rotating cast of irregular players, most games have been with the same crowd of faithful regulars. Campaigns are more satisfying than one-shots, if you can get your ducks in a row (I like short campaigns, like BBC or HBO TV seasons), so it seems a shame that we didn't go that route. So that's got me thinking too, most probably about games for next spring/summer, with recruitment and chargen occurring in winter, but the Christmas season might also serve as a start-up. The games I've been most thinking about are: 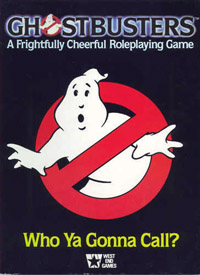 Ghostbusters. It's been brought to my attention that a couple of guys in my player pool are INSANE Ghostbusters fans, and yet my box of West End Games' original Ghostbusters game (for which I have a number of modules, no less) has been gathering dust on my RPG shelves for years. Seeing as my players enjoy comedy gaming even when it's supposed to be played straight, Ghostbusters might provide just the right kind of "series" for those cold winter months. I think it can easily take "occasional" gaming with a regular cast. 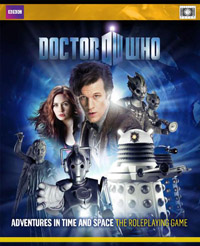 Doctor Who: Adventures in Time and Space. I'm probably going to mention this one in every single iteration of this post, but this time, I'm trying to think up a way of giving it an "open group" concept where each player doesn't need to be present every session. The "in" is our resident Time Lord is called the Shepherd, and in our Series 1 a few summers ago, he managed to pick up a number of strays (like 4-5 companions!), a bit like his namesake demands. What if he kept integrating more and more people into his "flock"? What if they lived aboard the TARDIS, working on their own projects, getting dropped of for field work or to visit family before getting picked up again? What if any given destination had different characters going out on adventures? Suddenly, we don't need to care if there are too many companions, or about tight player schedules. It could work, and I really do love this game and franchise. 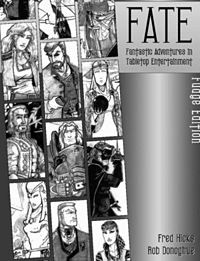 FATE. I don't know what. I don't know where. I don't know when. I just know that I've been meaning to give this famous new school game a real whirl, if only to poach ideas from it for other games. But it's a system without a setting for me at this point. I almost played Over the Edge, which is FATE-ish, once, but it didn't work out. Should it? OtE may actually work well with the people in my group who gravitate towards disturbing horror films. Or I could go really crazy with it and have a group-created setting, using ideas from each player to build a strange mish-mash that would be conducive to FATE's open-endedness. And if we're going to go New School, why not go all the way?

And I'm still thinking about one-shot deals too, like Paranoia (a favorite, but I need 5-6 players, the best Paranoia configuration for maximum, uhm, Paranoia) and James Bond 007 (Skyfall fever). All I know is, I've gotta start putting up Doodles so we can get together and PLAY.
Doctor Who RPGs