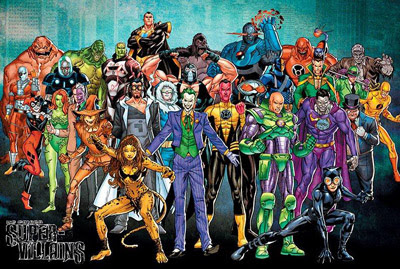 Last week, the rumors flew about DC Comics' next big thing, around issues 20, focusing on a host of villains making their New52 debut in each of that month's issues, and not against the heroes they are normally associated with. If true, it would be Acts of Vengeance, the Marvel event from late '89-early '90 in which the villains got together and traded foes in an effort to break their streaks of defeat. It was a fun idea that created some unusual match-ups and the difficulty that comes with unfamiliarity for the heroes. And if Villains Month has any kind of similar plot device, well, it's just not going to work.

Because such events are predicated on the world HAVING A HISTORY. If we don't know any of the villains (and they'll all be making their new first appearance), then they have no track record, no streak to break, and they're unfamiliar to everyone. Think of past events that infiltrated every book. Millenium only works if heroes have a supporting cast of long standing, Invasion only works if the universe has developed multiple alien races, War of the Gods if various pantheons have been introduced. All the New52 has really accumulated over the past year is secret organizations which could and should fight it out in a new version of the Janus Directive (if only to weed some of them out).

Could an Act of Vengeance then be done with existing villains? The new DC Universe has very little of those. I counted.

In well over 700 published comics over the past 14 months, only a little over 80 proper villains have made a rebooted appearance, fewer than the number of HEROES introduced in the same amount of time, and that number drops to around 60 if I remove those villains that are either thrown away mentions or visual references (like Amazo or the Riddler) and villains acting as anti-heroes (Deathstroke, Catwoman, the Squad), and many of the them are member of Batman's rogues' gallery. In the interests of full disclosure, those numbers are for rebooted DC villains only. I didn't count Wildstorm (which wouldn't raise the score that high) or new creations (which I'm glad for, it's not all about recapturing former glories).

One of the reasons there are so few singular villains is because the New52 has concentrated on the same threats for far too long and neglected to give its heroes a variety of opponents. The Court of Owls and its Talons took up more than a year of Batman, and barged into other titles in the extended Batman Family. The Rot, a force of nature with only the Arcane family and maybe Solomon Grundy as representatives, has been the main antagonist in Animal Man and Swamp Thing since the very beginning, and is now featured in Frankenstein and, if I'm right, Earth2. The Lantern books, despite having Sinestro and Black Hand, are four titles mostly concerned with the battle between various Lantern Corps (still). Each Corps is a force like the Rot or the Talons, with some variety within the type, but not producing "villains". Otherwise, there's a lot of Marvel-style punch-ups between heroes (Teen Titans vs. Legion Lost vs. Ravagers, for example), and many heroes are content with fighting monsters (Frankenstein, of course, but Superman has done little else in his eponymous book). This all goes well beyond the idea that villains stick around for 6-issue arcs, because then we'd get at least 50 new ones every 6 months, and that hasn't happened.

So yes, the New52 desperately need an injection of new villains - heck, if only to give the Suicide Squad some fodder in the years to come; that book just doesn't make sense without DC history to back up its membership - but I doubt it'll feel anything like Acts of Vengeance or even New Year's Evil (which have various villains a spotlight special). Rather, I'm thinking Underworld Unleashed in which Neron gave various lame villains a new look and powers so that they could go out and finally beat their nemesis. In essence, he rebooted them with icky new designs. Sounds like the New52 to me.
Comics Flushpoint

SallyP said…
There are a heck of a lot of perfectly good OLD villains that aren't being used.

Andrew said…
Have we seen a new version of Parasite yet? Because I'd be okay with having him debut in Firestorm. Again.
December 5, 2012 at 3:25 AM

Siskoid said…
The only Parasite we've had was in Superman Family Adventures and he was the best version of the character I've ever seen.

As for the shadow agencies, it's gotten to the point where it's almost an inside joke with some writers. Did I hear correctly that Human Bomb #1 introduces yet another one?
December 5, 2012 at 4:35 PM