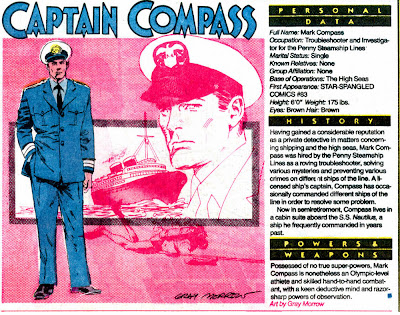 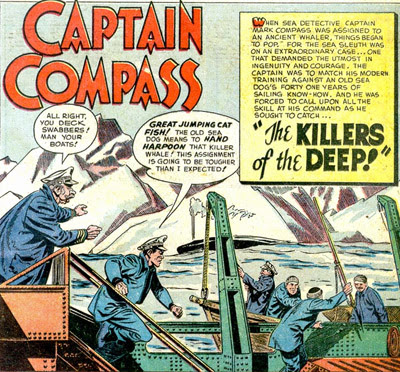 Picked almost at random, "The Killers of the Deep" isn't a detective story or anything, and doesn't really have killers of the deep in it, just plenty of killers of the surface. See, it's about whaling, and for all its talk of "killer whales", Aquaman creator Paul Norris' art (at least that's whose the Grand Comic Database believes it is) shows sperm whales. In any case, Captain Compass is a detective for hire who goes on ships and solves problems. His mission, if he should choose to accept it, is to go undercover as an old whaling captain's first mate and convince him to adopt the newfangled equipment and techniques the Nova Scotia whaling company wants him to use to increase his yield. But this old codger doesn't even want to replace parts that are obviously falling apart with age. Compass takes the job because next to solving crimes in international waters, there's nothing he likes more - apparently - than KILLING WHALES! This story is about as dated as Tintin in the Congo, and in exactly the same way.

Among the techniques he's brought along, for example, is an explosive harpoon. Are you telling me these are safe and humane?

Compass says YES! If you hit right in the jaw, it brings on death real quick and doesn't blow blubber everywhere!  They don't even pick up that whale because it's apparently a real killing spree. They kill SIX whales in all before starting to tractor them in. SIX! 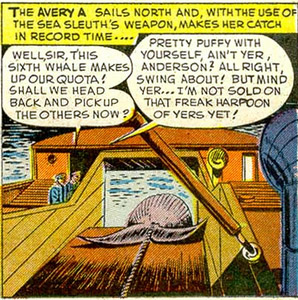 But when they come back to the whale Compass shot himself, they find poachers there, explaining how the old cap'n brought in so few catches (ah, so there WAS a mystery). But how can you tell whose whale carcass is whose? And by the way, are they killing BABIES?!? Look at the size of this poor thing!

Well, Compass has thought of that too... 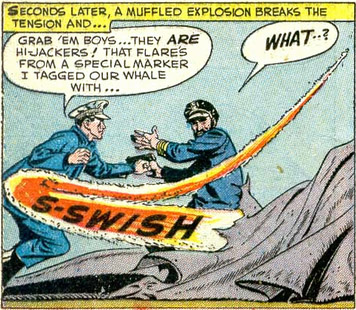 That's a luckily timed flare shooting out of the whale to prove it was his catch. The poachers are caught and a fist fight ensues, apparently par for the course in a Captain Compass story (though usually, or so I'm told, he has to punch members of his own crew). 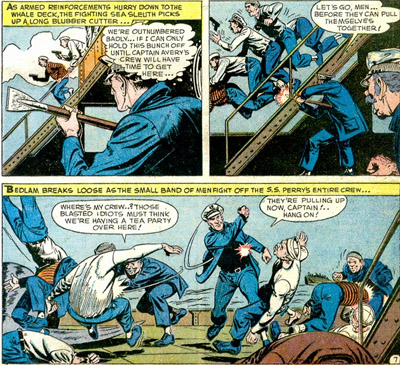 Hey the old guy's not bad in a fight either. After that, Compass reveals his real identity and mission, they get back to port, and to the company's satisfaction, their employee is finally playing by the new rules they've set up. Check's in the mail, Captain Compass! Courtesy of the whaling industry. Wow. No wonder this stuff's never been reprinted. (Obviously, his stories don't all feature him making Star Trek IV an inevitability.)

Wikipedia has some "citation needed" hogwash about Compass working the Martian Manhunter on a boat trip, and later working with the Justice League. I'm not sure who the Wiki-ist is confusing Mark Compass with... Any ideas?

Who else? I don't need to go far. Captain Compass is at the top of the page, and who's at the bottom? Captain Fear, a more recent sea-faring character, but not very well known either! Hope you like the open seas, because I'm not ready to come to shore yet!
Comics Golden Age Who's This?

De said…
One day I'll get around to read the issue of Detective where he teams up with the other DCU detectives.
December 17, 2012 at 10:57 AM