Y'All Ready for Snow? 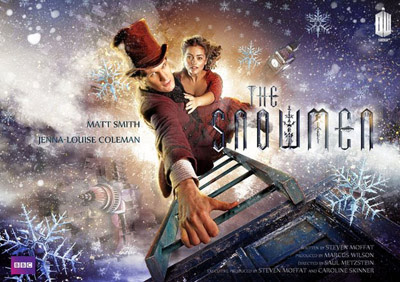 So today is the Doctor Who Christmas special, "The Snowmen", which introduces (for realz, for realz) the new companion played by Jenna-Louise Coleman. Plus the return of some popular Victorian characters (no, not Jago and Lightfood, classic Whovians!). But no spoilers, my British friends! I likely won't see it before tomorrow night and my evening is your afternoon to boot!

After that, we head into 2013, Doctor Who's 50th Anniversary year. Though the birthday isn't until November 23rd, we've been promised a HUGE year for the good Doctor. Show runner Steven Moffat has said the 8 upcoming episodes are big standalone blockbusters, one of which was written by fan favorite Neil Gaiman, and another tentatively (and tantalizingly) called "Journey to the Center of the TARDIS". On Nov.23, a 50th Anniversary special that's bound to star Doctors and companions from other eras. It's what they did for the 10th and 20th Anniversaries, and it's what the fans want and expect, so I can't see it going down any other way.

And let's not forget the Mark Gatiss-penned 90-minute docu-drama on the making of Doctor Who, provisionally titled "An Adventure In Space And Time". That's one biopic I want to see next year! Can't wait to see who's playing Sydney Newman, Verity Lambert, and gosh, William Hartnell!

But wait, there's more. Cubicle 7, makers of the awesome Doctor Who role-playing game, have indicated they would like to release sourcebooks for each of the 11 Doctors over the course of the year. That's a LOT of product for a company that's struggled with late books for the past few years, but the recent close-together (pdf) releases of the UNIT and time travel sourcebooks means they've fixed their branding problems (everything was put on hold to turn the 10th Doctor brand into the 11th). Apparently the first Doctor's book is already in the proofing stage.

So Merry Christmas and all, and it looks like a Happy New Year too, but the only holiday I truly observe is the Whoniversary. And it looks like I'll be observing it ALL YEAR.
Doctor Who Holidays RPGs

The story was nonsense, but Jenna-Louise Coleman is so completely watchable I don't care. Whatever heartache I may still have over the loss of Rory (and Amy too I guess), Clara makes the hurt go away.
December 26, 2012 at 12:54 AM

Siskoid said…
The trick will be keeping her this sharp and clever across all episodes.
December 26, 2012 at 1:02 AM