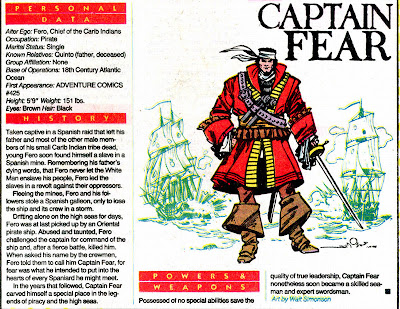 The facts: Captain Fear was created by Robert Kanigher and Alex Nino in 1972 and serialized in 8-page installments in Adventure Comics, six chapters being published between issue 425 and 433. David Michelinie and Walt Simonson tried to revive him in 1981 as a back-up in Unknown Soldier, from #254 to #256. Only in the Simonson-drawn story did he look anything like he did in his Who's Who entry.
How you could have heard of him: Captain Fear and his ship were made ghosts in John Ostrander and Tom Mandrake's Spectre, haunting the pages off issues 40 and 41 (1996), and he would later appear along with other characters in Limbo in Dr. Thirteen: Architecture & Mortality (2007).
Example story: Let's go for the first appearance and origin from Adventure Comics #425 (1972). 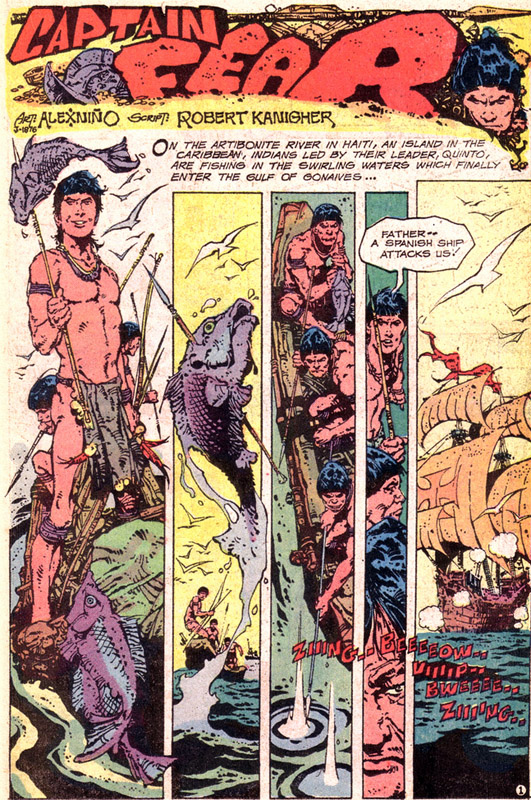 You wouldn't know it from looking at his Who's Who entry, but Captain Fear started life as a Carib Indian called Fero, living in Haiti in the year 1850. What you see above is his actual look across all his original Adventure Comics appearances. The next thing you should notice is grossly under-rated Filipino artist Alex Nino's drawing, which is just wonderful. It's obvious from this that Nino was a major influence on Walt Simonson's style, and it makes sense Simonson would eventually take up (though drastically re-design) the character.

Though Fero's ethnicity is unique, the broad details of his origin are not. His father is shot dead before his eyes by Spanish slavers, the man's last words advising his son to resist the "white devils" at all costs. Unlike Joe Chill, who got away with it for years or forever, Fero drops his father murderer on the spot. 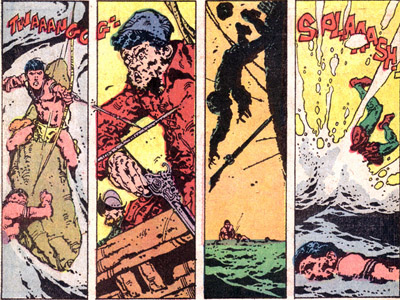 He and his Carib brothers are still captured and put to work on an island mine, but Fero soon engineers a violent escape and they steam a galleon(!). It sinks in a storm with almost all hands lost. Only Fero survives (duh!) and he is picked up by a Chinese pirate ship rather far from home. 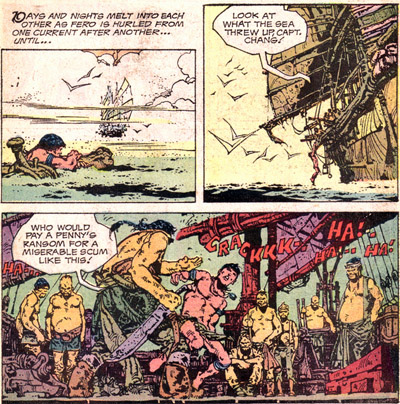 Captain Chang lets Fero duel him for command of the ship, tied by the wrist. I guess he was bored because he really didn't have to do that. But he does and he LOSES. That's when Fero takes the name Captain Fear, because Spaniards are a cowardly lot, you know how the saying goes. "For FEAR is what I mean to put in the hearts of the every WHITE DEVIL I meet!" Will the Chinese crew stand for this? 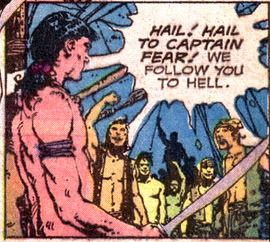 HELLS YEAH! Over his next five appearances, Captain Fear goes through ups and downs, losing one crew, finding another. After 1974, nothing until '81, and in such a radical new look, he might as well be a completely different pirate with the same name. Still, you can't fault the Simonson art, which is prototypically THOR FIGHTING BROADSIDES! 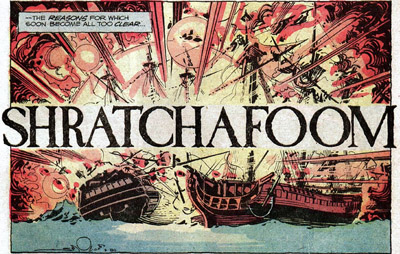 Who else? There are a couple of even more obscure Captains in Who's Who, but they were so obscure, they were tagged on after Z in the last issue! No luck there. Volume IV has Cave Carson, a Forgotten Hero, but one that keeps making appearances, so not quite obscure enough. Chemical King? Haven't you seen his statue in the hall of dead Legionnaires? Ah. The last page has my next target - Chris KL-99! Who IS this Jimmy Olsen look-alike? We'll find out together when next we ask... Who's This?
Comics Who's This?

De said…
I would have loved to see a Captain Compass vs. Captain Fear story, but I suppose it would have to involve time travel or magic or something.
January 3, 2013 at 10:56 AM

Boosterrific said…
I was flabbergasted to learn that Wizkids made a Cave Carson Heroclix figure a few years back. Now that's some good fan service! (I giggle imagining the Heroclix crowd clamoring for that one extra spelunking figure necessary to round out their team of molemen and morlocks.) If they can make a Cave Carson, it can only be a matter of time until I can have a Goldstar!
January 3, 2013 at 7:50 PM

Siskoid said…
Well who else will your Clix be able to move to under the table and defeat the Mole Man?
January 3, 2013 at 8:02 PM