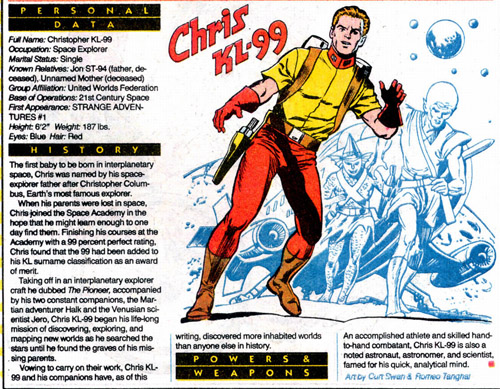 The facts: Named after Christopher Columbus, Chris was the first human child born in space. Later in life, he followed in his (missing) parents' footsteps and became a renowned explorer, discovering world after world AND defending the Earth from alien menaces aboard his ship, the Pioneer, and with his friends, a Martian, a Venusian, and a chameleon-dog. These stories were the work of SF novelist Edmund Hamilton, and appeared in 8 issues of SF anthology Strange Adventures between #1 and #15 (1950-51), getting the top story three times.
How you could have heard of him: If you're as old as I am, you might have seen him fighting the Forgotten Villains during the original Crisis in DC Comics Presents #78, or in Secret Origins #43. If you're not, he was one of those SF heroes with a cameo in 2007's Brave and the Bold #6. That's about all Chris can get these days.
Example story: Strange Adventures #3 (1950) 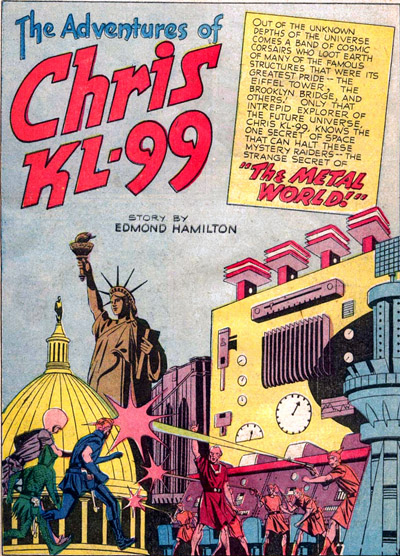 First thing I notice is that Chris KL-99 doesn't really look like Jimmy Olsen in his own stories. That's just what happens when a ginger is drawn by Curt Swan, I guess. And in this particular story, his uniform's color scheme is completely different, just a dark blue. But I think we have a lazy colorist one our hands here, because the "red" Martian has the same complexion as Chris and so does the "green" Venusian (whose face is erroneously pink). Let's not let that ruin our space opera experience, ok?

So right off the bat, Chris lives up to his reputation and discovers two new planets in an uncharted system. There's a world where the people make everything from crystals, and another that's hollow with an ecosystem on the inside. Both could be interesting places to visit, but no, we're just taking readings and pictures. It's a big galaxy (/universe, the strips use these interchangeably) and you just can't set foot on every piece of floating real estate. In any case, Chris is recalled back to Earth where unknown aliens have stolen various monuments!

In other words, Earth isn't defended. You can just come in and take our stuff, and the only ship that can do anything is a three-man vessel out looking for new planets. Thankfully, Chris has a groovy telescope aboard that can see ion trails. 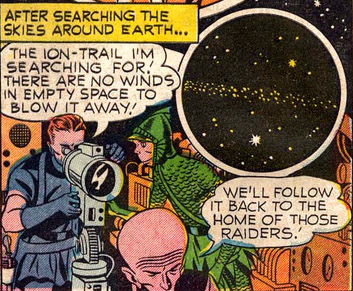 At least the strips know there's no air in space. We can't take any science for granted here. They follow the trail to Quorat, the Foggy Planet, but they didn't do it, they're victims too. As is every planet on the trail, losing beloved Star temples and necessary tide machines alike. Finally, Chris comes upon a planet with a big engine attached to its south pole. This is it. From its flora, you can guess what Hamilton was on. 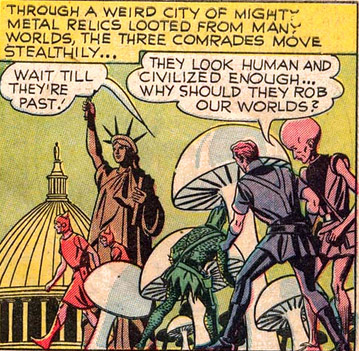 Loopy the chameleon-dog is quite scared, which makes him turn blue. It doesn't look like they know what "chameleon" means. He's just a useless mood ring. But that's how they know the planet is the correct one. And indeed, Loopy was right, these guys not only have horns on their heads, but are working a big "switchboard" and about to hightail it out of our "universe". 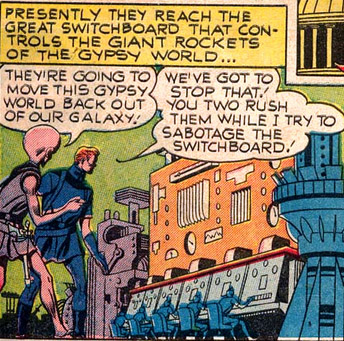 Gypsy World? Because it's moving and stealing precious stuff? Kiiiiiiiiiinda racist. And they keep saying it and saying it. All the way to getting captured. 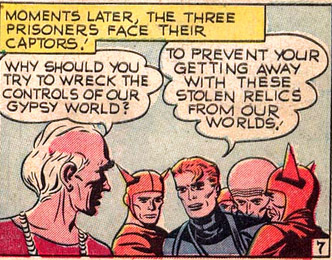 Way to go, Gypsy Worlder! You take that word back and own it! But turns out, these guys aren't evil, they just like horns. And are misguided and desperate! See, in their "universe", a space blight at all the metal and threatens civilization itself. They cured the thing, but too late. Just look at this mess!

So they built ships made of plastic and used the Gypsy World to go to another "universe" and get sorely-needed metal. They didn't know all that stuff was culturally significant, they swear! Chris has a better idea. He points out that he just discovered a system with a small world of solid metal which they could tow home! (Confusingly, this doesn't appear to be either of the planets discovered at the top of the story. Unless Chris is carting off sentient races, or selling the Space Gypsies a hollow promise. Which they totally deserve for not realizing they have the power to build plastic ships AND fly planets around... who needs metal?) Anyway, the aliens thought of this, but their plastic ships might melt under the red sun's heat in that system. So Chris flies the Gypsy World right into an eclipse, avoiding all that melty danger.

They survive those last few minutes, and in gratitude, the aliens return all the relics they've taken. 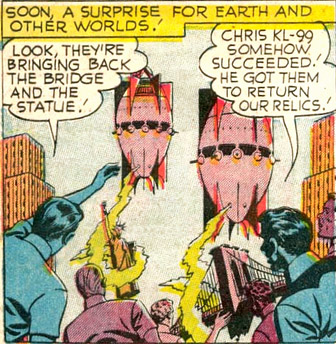 Again, it's pretty lucky that Earth is undefended, because I bet Earth could have had a surprise waiting for THEM.

Chris KL-99 is an ok strip, just what you'd expect from 1950s Flash Gordon-type fare. Despite the outlandish science, it's packed with imagination, throwing away concepts other writers and artists could have made a meal of. But there's no getting away from how dated it all seems, and it's no wonder Chris wasn't seen for 35 years after Captain Comet basically took over his spot in Strange Adventures.

Who else? He's on the last page, so we're leaving volume IV behind. Volume V is next! Name your favorite obscure characters alphabetically between Chronos and Cyclotron, and I'll see what I can do to help you achieve enlightenment.
Comics Who's This?

Matthew Turnage said…
Not sure if you saw it, but Chris KL-99 was name-checked on some background signage in this week's Green Lantern: New Guardians Annual.
January 10, 2013 at 10:56 AM

De said…
The wonderfully curmudgeony Andrew Weiss did a cute write-up of Colonel Future this week over at Armagideon Time:

Siskoid said…
Matt: Didn't see it, but I'd imagine Giffen would be game for a KL-project.

De: Andrew's stolen all my thunder on that one! I may have to slip Colonel Future and just advertize the link!
January 10, 2013 at 5:20 PM

John Valandingham said…
Chris KL-99 from Strange Adventures was one of my favorite heroes from the 1950's , Loopy , the Chameleon-dog changed colors with emotions. The fantasy and adventures of these comics , plus the positive examples for living is why I am who I am. Anything is possible!
April 27, 2022 at 5:20 PM