January 31, 2013
Who's This? The guy from that really cool Eduardo Barreto illustration on page 11 of Who's Who volume V. 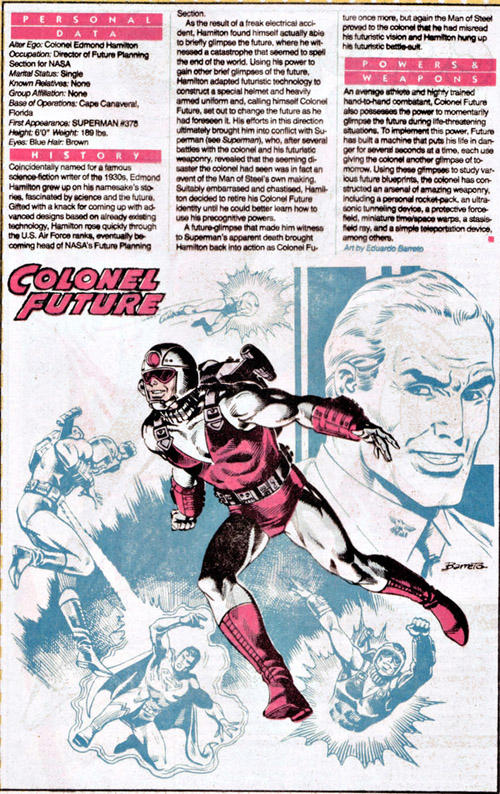 The facts: Not to be confused with an Earth-2 Superman villain, Colonel Future was a hero created by Paul Kupperberg who appeared only twice, in Superman #387 (1982) and #399 (1984). The first time, he was drawn by Curt Swan, and the second, by Barreto. His full page in Who's Who either betrays DC's faith in his potential for return, or is justified entirely by the quality of the illustration, you decide.
How you could have heard of him: Maybe you're confusing him with CAPTAIN Future? (see below)
Example story: Superman vol.1 #387 (1982) 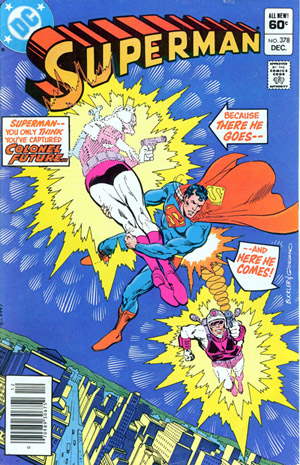 Let's look at his origin story, "The Man Who Saved the Future!". It starts in rather spooky and prophetic fashion with Superman saving space shuttle Columbia from a crash landing. 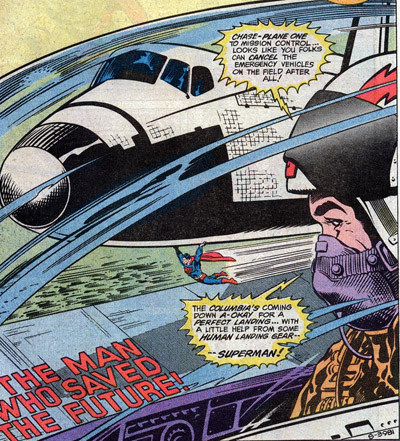 Eerie, but appropriate, because this is the story of a man who can predict the future. Colonel Edmund Hamilton was named for the 1930s science fiction author responsible for Captain Future, which in turn became this Hamilton's nickname after he began showing incredible talent at extrapolating new technologies for NASA. My personal connection to the real Hamilton's Captain Future is the late-70s anime which I watched in French translation as Capitaine Flam. 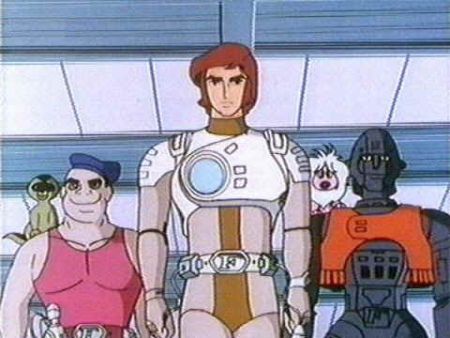 On Sundays after Albator (Captain Harlock), I remember loving the tech designs and the way each episode ended in a cliffhanger. Kupperberg's story, then, is meant as a tribute to those old science-fiction stories, so it makes sense that the character would be a one-off (or in this case, a two-off), just like similar homages to Asterix in Action Comics and Tintin in Teen Titans Spotlight through the 80s.

Hamilton is just a brilliant inventor, initially, but then he drops some coffee on one of those high-voltage NASA ground control consoles and nearly electrocutes himself. 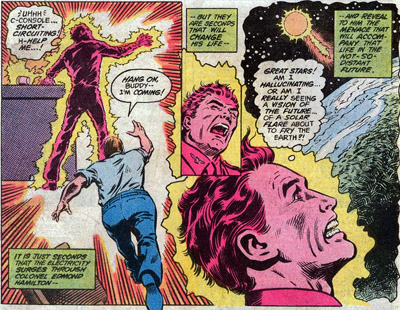 The near-death experience gives him an apocalyptic vision of a solar flare frying the Earth, so he hatches a plan: He'll use his facility with technology and precog powers to outfit himself in gear from 200 years hence and save the world as Colonel Future. Can Curt Swan make him look real cool like Barreto does? 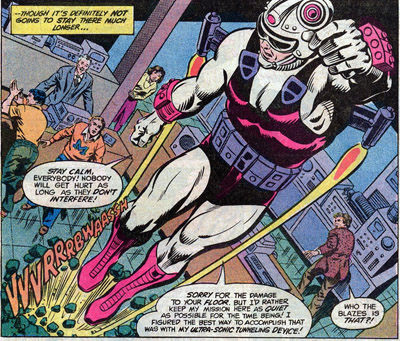 Uhm, no, but he still draws an acceptable retro-space hero. Drew enough of them in the 50s and 60s.  So did the electrocution unlock Colonel Future precognitive abilities entirely? Nope. To achieve his ends, Hamilton has to bring himself near death over and over again so he can snatch future blueprints out of the ether! So how'd he get the blueprint for that Near Death Machine? Throwing coffee on priceless equipment ON PURPOSE? What Future can't build, he steals, which brings him in conflict with Superman. He tries to explain, but the Man of Steel won't hear reason and they fight. Future's forcefields and space-time warps don't stop Superman, but neither does Supes ever catch Hamilton.

Taking a break from the chase, Superman spies a asteroid that will hit Earth in 75 years and decides to preemptively destroy it. Except it's full of kryptonite, so he can't. So instead, he scoops up lots of unused satellites in Earth's orbit... 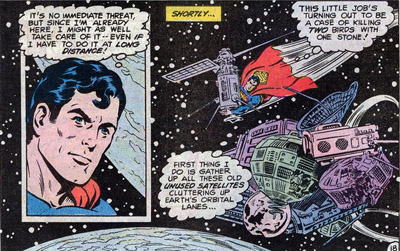 ...and melts them down to craft a giant space mirror. Meanwhile, Colonel Future is in dry-as-a-bone Puerto Rico setting up his flare stopper above the world's biggest dish antenna. 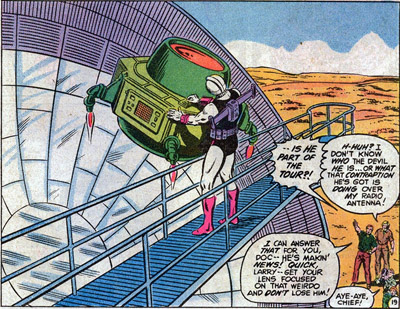 But here's the twist. The solar flare Hamilton saw was Superman flying into the sun, dragging star-stuff behind him and bouncing it off the mirror so it could be reflected at the asteroid. So instead, Future's gadget destroys the mirror and the flare really does come to fry the Earth. But obviously, it has to contend with Superman.

And just like that, and with no surprise on the part of the narrator, the threat is ended. Which leaves five panels for Colonel Future to FINALLY explain himself to Superman, which leads to a stern lecture.

And if Colonel Future had never appeared again, I might have some fun implying that Superman got rid of him somehow. That he'd be buried somewhere in the Puerto Rican desert (hey, who am I to argue with the DCU's geography?). But he DOES appear again AND it's in a story that qualifies for a Reign of the Supermen entry! So guess what?

TO BE CONTINUED THIS SATURDAY!!!

Who else? Leading up to that entry in Who's Who volume V, we might have had Claw the Unconquered, but versions of him have appeared in a Wildstorm series, in Primal Force, and more recently in Wonder Woman. The Clock King seemed really obscure at the time, but Justice League Antarctica fixed that. Colonel Computron maybe? Why would you require me to read latter-day issues of the Flash? That's not human! But looking ahead, I think Who's This? is about to feature its first VILLAIN. Stay tuned!
Comics Superman Who's This?

Zundian said…
I'm kind-of shocked that Col. Future hasn't been rebooted somehow as an especially grim and gritty hero. Needing to shorten your lifespan for pre-cog flashes seems like it'd be right up the '90s alley.
January 31, 2013 at 9:19 AM

Martin Gray said…
I loved that he was named for SF and comics writer Edmond Hamilton, as you say. How very Ray Palmer!

Deathbolt (appeared thrice in Young All-Stars and had an appearance in Starman One Million)
The Demolition Team
Dr. Double X (only 3 appearances since Crisis)

Jeremy Patrick said…
I like the line about Clock-King being obscure "but Justice League Antartica fixed that". That's some fine slicing of the meaning of the word "obscure."
January 31, 2013 at 11:44 PM

Siskoid said…
It put him on the map, I tell ya! And in any case, a version of him was on the old Batman TV show, and it wasn't long after JLAnt that he showed up on the Batman Animated Series. And I'm not even mentioning the Terror Titans stuff (because who would?).
February 1, 2013 at 7:56 AM