Who's the Crime Doctor? 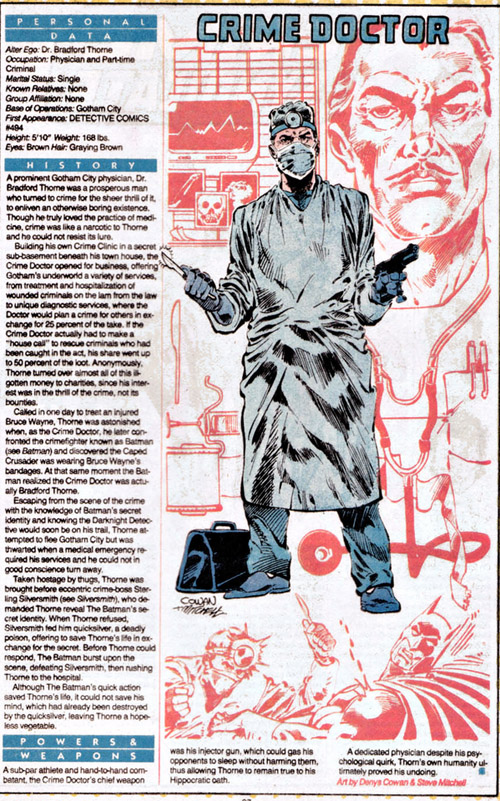 The facts: Dr. Bradford Thorne, the Crime Doctor first tangled with the Batman in Detective Comics #77 (1943) and almost immediately in Batman #18. Then he was forgotten until 1980 when 'Tec brought him back for a two-issue engagement (494-495) that left his mind addled by mercury poisoning. The Crisis on Infinite Earths (where he was seen working with Luthor's villains) seems to have healed him because he returned in 1987 for the story we'll look at today.
How you could have heard of him: To me, this character was always obscure and I wondered why he wasn't featured more in the Batman books. His shtick certainly fits his rogues' gallery very well. Doing a little research, I found that he WAS featured quite a lot in the 90s and 00s. He appeared in an episode of the Batman Animated Series (I'd forgotten), in Villains United and in several issues of Gail Simone's Birds of Prey. Of course, those later stories turned him into some kind of master torturer (sigh), which is very different take on the character. Maybe the version I'm gonna talk about HASN'T had any exposure in a long time.
Example story: Detective Comics #579 (1987) by Mike Barr and Norm Breyfogle. It's the next story AFTER where that Who's Who biography leaves off. 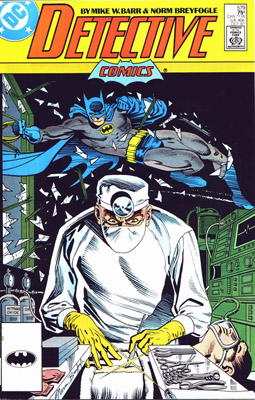 "The Crime Doctor's Crimson Clinic" is a nice little one-off drawn by my favorite Batman artist of all time, and written by a very different Mike Barr from the one I chastise so often for his Batman and the Outsiders work. His run on Detective was quite good, his Jason Todd Robin a fun character reminiscent of the 1960s TV Robin as played by Burt Ward, quick with a pun and always hitting his hand with his fist in anticipation of some action (Batman calls him "chum" too). And his Crime Doctor is a GIANT! 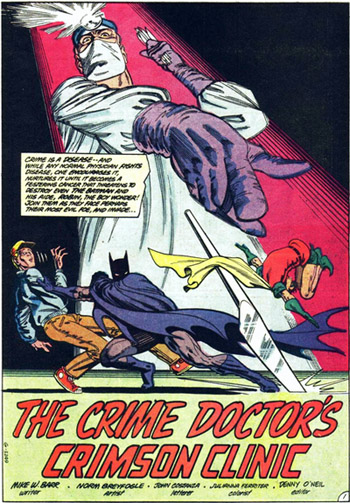 Nooooooo, silly. That's just an old school splash page, really harking back to those Golden Age stories where a gigantic villain would threaten a miniature Batman and Robin on covers and splashes. So we're off to a good start. The story features a rash of robberies perpetrated on blood banks, a down-on-his-luck ex-con willing to donate a heart to a rich crook to take care of his wife and daughter, and at the center of it all, the Crime Doctor, performing the illegal and unethical transplant. One reason why I think this character should have appeared more is his choice of henchperson. Meet Nurse Rench: 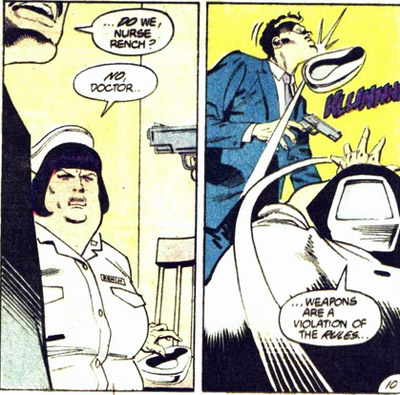 Oh, you don't force the Crime Doctor to operate at gunpoint no matter what your level of paranoia is. Y'understand, punk? 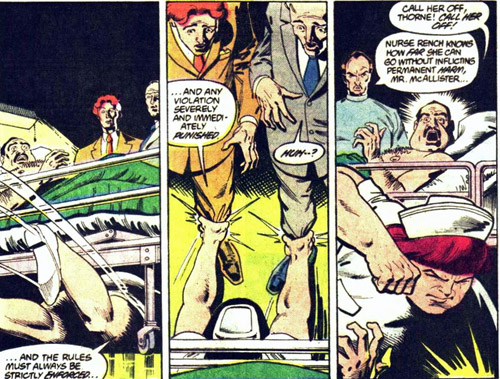 I think he understands. Meanwhile, Batman and Robin use actual detective work to follow the, ahem, blood trail to the ex-con's family, then to the Crime Clinic, where they stealthily attack by sabotaging the lights and air ducts, so the operation can't take place. Almost choked out by the Nurse, Robin has to push for health care reform. 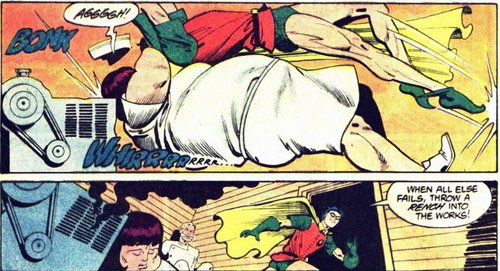 Ouch! (That knock on the head can't have felt good either.) Going deeper into the makeshift hospital, Batman comes across the crook who needs a new heart and, well... 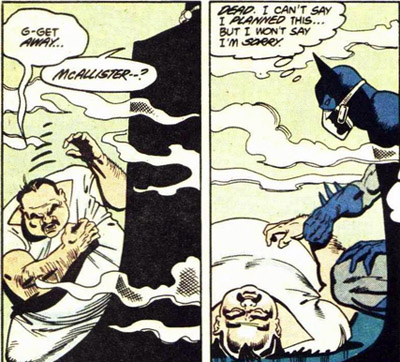 Oops! What I like here is that the villain was going to save that man's life, and the hero is the one who kills him. A neat reversal made possible by making the baddie a doctor. Sorry Crime Doctor, but YOU'LL NEVER HEAL AGAIN! The ex-con who was going to be his victim makes sure of that by CRUSHING HIS HANDS! 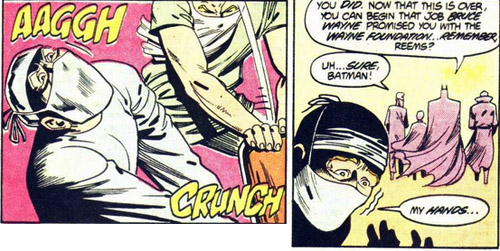 Harsh. When the Commissioner Gordon arrives, Batman is quick to say the ex-con was helping him all along and that he's got a job with Bruce Wayne, reuniting him with his family. It's a good Crime Doctor story, but it's also a good Batman story. His father was a physician, and it means he has a personal stake in stopping an unethical doctor who perverts his father's profession. AND he reunites a parent with a child, which is totally Batman.

By the time the Crime Doctor was seen again, his hands were fine. Maybe Infinite Crisis fixed him. I have a feeling each Crisis Event restores him to health, gives him one more outing, only to be destroyed again. In that Birds of Prey story, he commits suicide to save his daughter from torture and murder. Time will tell if he returns to the New52, though given the darker state of things at DC these days, it would probably be more of the torturer version than the unethical healer of this and previous stories. Or perhaps the nasty female Crime Doctor that appeared in Manhunter, but that's a completely different character.

Who else? Between Colonel Future (our last entry) and the end of Who's Who volume V, relatively obscure characters included Forgotten Hero Congo Bill, though now Congorilla's been in a version of the Justice League. The Construct isn't exactly headline news, but you can't force me to read the one appearance I own - the Red Tornado mini-series (THE SHAME!!!). And there might have been Cyclotron, but his Who's Who entry came off a very recent appearance in All-Star Squadron, so at the time, not really obscure. So we'll move on to Volume VI, coming to a blog post near you in the near future!
Batman Comics Who's This?

Señor Editor said…
Love this post, Siskoid. Breyfogle is my favorite Batman artist, too. I'm keeping my fingers crossed for any other one-off villains from his time on the Bat books in this feature:)
February 9, 2013 at 8:08 AM