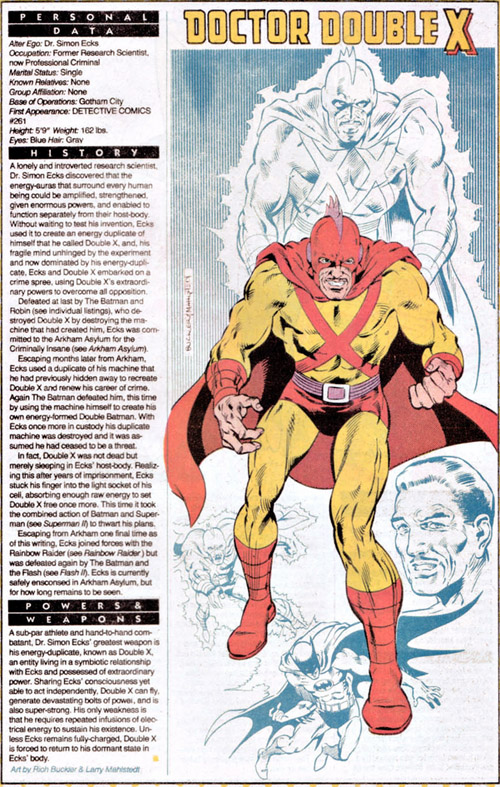 The facts: A bit out of Batman's current wheelhouse of crazies, Doctor Double X is a rare super-powered villain, born in 1958 from the imagination of Dave Wood and Sheldon Moldoff in Detective Comics #261, when Doctor X used radiation to bring his aura alive. It's two villains for the price of one. Wood and Moldoff brought Doctors X and Double X back for a return engagement five years later in 'Tec #316, and then he wasn't seen for 20 years, and only when Batman was teamed up with a super-powered friend, like Superman (in World's Finest Comics #276) and the Flash (in Brave and the Bold #194). After that, he barely rated cameos.
How you could have heard of him: He's had small appearances in Young Justice (the 90s comic) and one pretty funny appearance at a convention in Titans #17 selling Deathstroke masks, but you probably saw him on an episode of Batman: The Brave and the Bold ("A Bat Divided" feat. Firestorm).
Example story: Detective Comics #316 (1963) 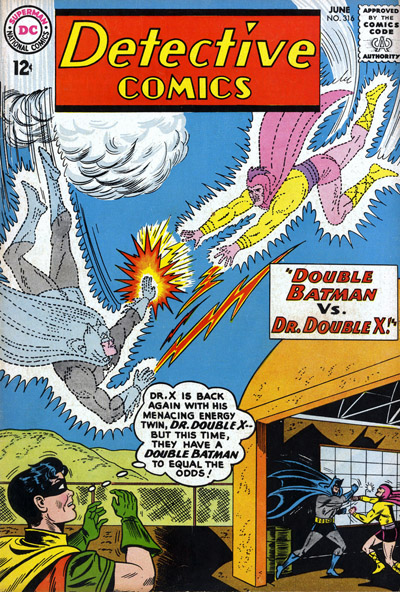 When exploring a crazy-ass Silver Age concept like this, it's important, I think, to go back to the source. So never you mind Doctor Double X's return appearances in the early 80s, not when a story that features Batman's aura fighting Doctor X's aura exists. It's a story that begins with Dr. Simon Ecks escaping from Happydale Sanitarium. Clearly, Arkham (which wouldn't open its doors until 1974) isn't the only asylum with an open door policy. He makes a beeline for an old safehouse, where he has the tech to resurrect his sentient, super-powered, pasty-wearing aura. 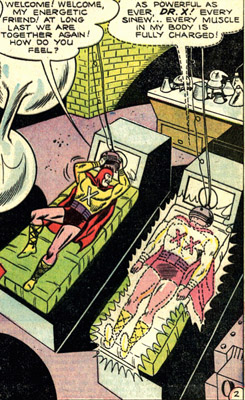 Together, they reembark on a life of crime, stealing the stuff they need to keep Double X well energized. The key to his defeat, you see, is to drain his energy by plugging him into something that requires that energy. So the Xs need a steady supply.

Their whirligigs out of commission, the Dynamic Duo are unable to chase the villains when they escape, so they use their detective skills (it says they should right there in the book's title) to find the safehouse. It's as easy as checking with the power company to see who's been using an inordinate amount of electricity. So after what doubtless must have been a couple of bat-assisted drug busts, they find it, already abandoned. So what does the Dark Knight Avenger do to get his justice? HE ADDS TO DOCTOR X'S ALREADY EXORBITANT ELECTRIC BILL! 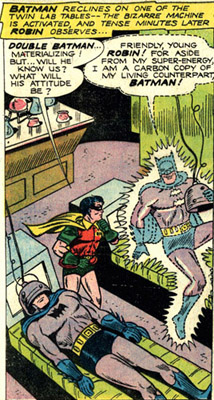 Note the double-bat on his chest. I wonder if your aura has four nipples. Or if auras actually don't exist. Anyway, Batman's aura is energy-powered too, and is as friendly as he is, so off they go together to fight crime. And the crime in this case is the Xs robbing the Gotham Weapons Proving Ground, a military installation filled with crazy SF vehicles. As far as military compounds go, its security sucks or else Vicki Vale wouldn't have wandered in to take pictures of all the top secret hardware. 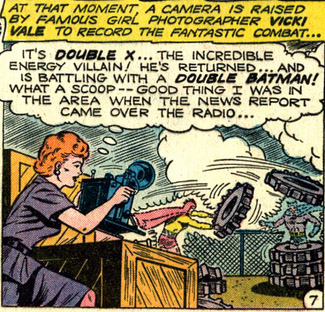 But again the bad guys escape, even with the help of Double-Batman, and having completed work on a new energizer machine, they destroy the original to make Double-Batman disappear.

The strange thing about Vicki Vale's pictures is that they are (and this is true throughout the story) almost immediately broadcast on television. In this case, it helps sell Batman's convoluted plan - as all Silver Age Batman stories must include one - that results in Double-Batman being alive and well and able to destroy Double X's birth machine and destroy HIM. See, Batman figured out the Xs would destroy the first machine, so he replaced it with a duplicate and ferreted the real one to the Bat-Cave. Robin hid in the safehouse and reported to the Bats when Double-Batman should "disappear" (which makes Vicki's instant photo-broadcasting all the more incredible). From there, they followed the bad guys with a Geiger counter, having seeded the floor with a radioactive dust. If it seems like one or two of those steps could have been removed from the plan without changing its outcome, I have two words for you by way of explanation: Silver. Age.

So what happened to Double-Batman? In the issue's saddest moment, he commits suicide.

Batman is clearly (and strangely) choked up. Perhaps he realizes all the slash fic possibilities that have died along with his double.

Who else? In Volume VI, the only other contender might have been the Demolition Team, maybe Dr. Phosphorus or Deathbolt, but I'll just have to get them on the next go-round. On to Volume VII!
Batman Comics Silver Age Who's This?

Boosterrific said…
The first time I met Doctor Double X outside of WHO'S WHO was as a cameo appearance in one of those early 2000s JLI reunion titles, either JLA INCARNATIONS or FORMERLY KNOWN AS THE JUSTICE LEAGUE. Poor guy had gone from battling Batman to set dressing. Batman already has a full house of villains, so I've alway thought that the DOOM PATROL should borrow him for an anti-Negative Man battle! If he added another self and became Doctor Triple X, he'd have fit right in with Morrison's run on the title.
February 12, 2013 at 5:24 PM