February 27, 2013
Who's This? The wonderful illo by Bill Sienkiewicz on page 4 of Who's Who vol.VII: 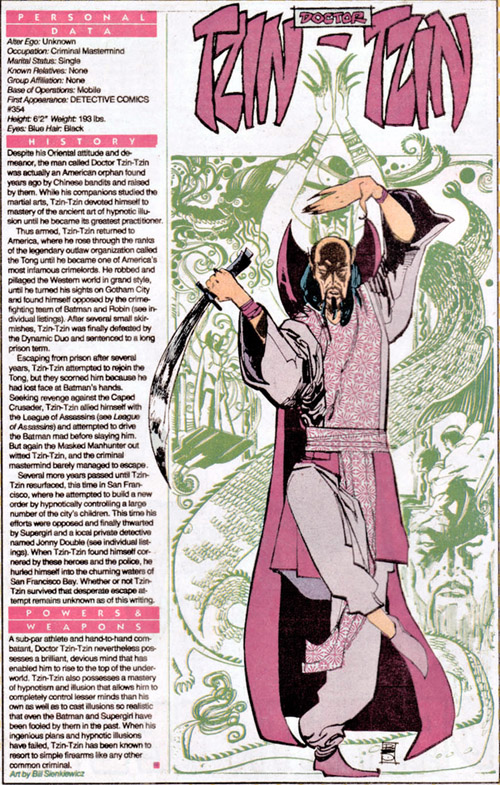 The facts: Tzin-Tzin is a Fu Manchu-inspired underworld figure who used his powers of illusion and hypnotism against Batman and Robin a number of times, starting in Detective Comics #354 (1966). His appearances have been few and far between. His next appearance has him joining the League of Assassins (Detective #408, 1971), which didn't exactly make him take off (though as you'll see below, a nice-looking tale). He was then in Adventure Comics fighting Supergirl (#418, 1972) and in a few 1977 issues of Batman. He served as main villain in the 1988 Peacemaker mini-series where he was killed.
How you could have heard of him: Grant Morrison used him as a member of the League of Assassins in Batman Inc. vol.2 #4, but only eagle-eyed trivia kings are likely to have spotted him.
Example story: Detective Comics #408 (1971) by Len Wein, Marv Wolfman (and his annoying use of 2nd-person narration) and Neal Adams 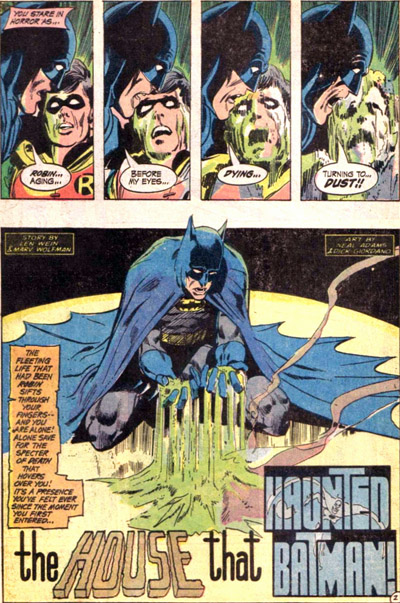 "The House That Haunted Batman" is a 15-page story (reprinted in Detective Comics #477, 1978, with a new framing tale) that starts in medias res with Batman obviously suffering through some nasty illusions, like Robin dying and coming back as a killer (no, not Jason Todd), and his funeral/roast: 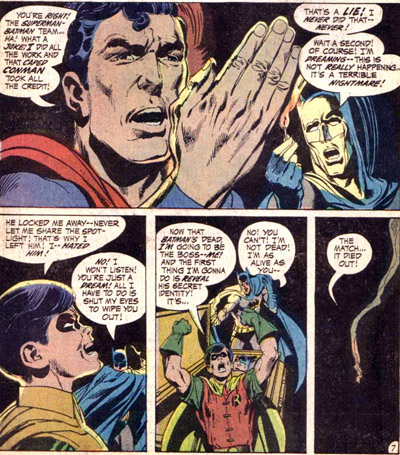 That stings! That last one is also the basis for All-Star Batman & Robin. As the walls close in around him, Batman becomes aware of reality (disbelieved illusion). He's in a glass tube, bouncing around, as is Robin. It's a death trap concocted by Dr. Tzin-Tzin with the help of Guild of Calamitous Intent League of Assassins resources. Because it's not enough to have mental powers that can confound the Batman, you really need a high-tech death trap to go with them. Point in case, this Bondian beauty: 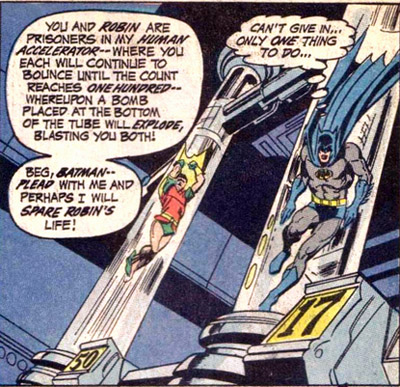 Predictably, Batman dies. Did you believe that? Tzin-Tzin did! SUCKER!

So he breaks out his "Deadly Dozen", a cadre of kung fu fighters mostly dressed as waiters. 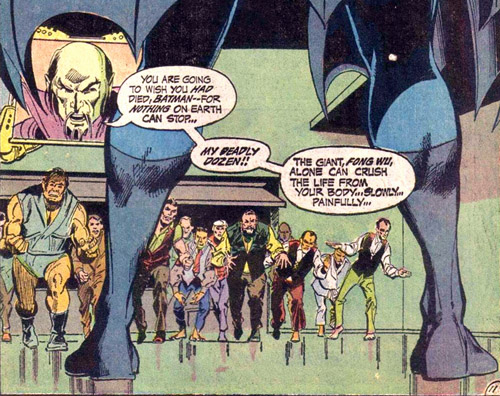 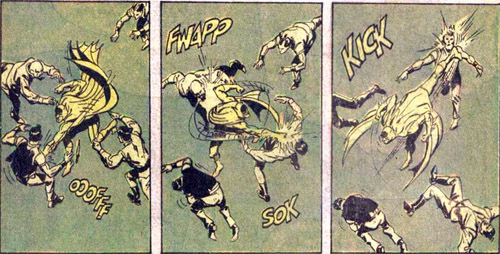 Though Batman makes relatively short work of these goons, it's Robin who gets the kill on Tzin-Tzin, coming up from behind him and... 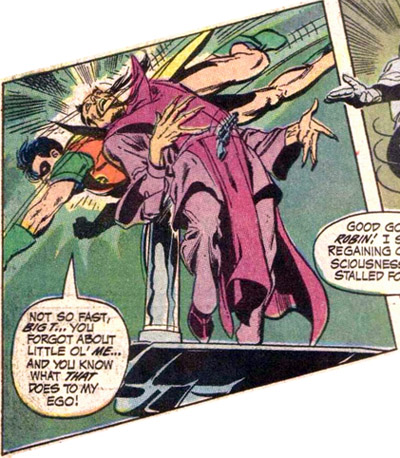 The Dynamic Duo walk him out to the Batmobile, but hear a laugh from the old haunted house. It's Tzin-Tzin at the window! Or is it? They turn around and the one they had in custody is gone! And then...

So much for the Deadly Dozen, eh?

Batman writers have often used hallucinogenic villains to screw with Batman's head, and that makes sense because his world is entirely conducive to psychological exploration. So why hasn't Dr. Tzin-Tzin been used more? Is it because the Scarecrow can fill that niche more effectively? Surely, if that were true, no one would have felt the need to create the equally forgotten Mirage or Spellbinder. Is it the inherent racism of an Asian character, even an Asian-American like Tzin-Tzin, taking on a stereotyped Fu Manchu persona better suited to the Golden Age and its tales of Yellow Peril? Whatever the case may be, even with League of Assassins support, Tzin-Tzin has failed to get much play.

Who else? At the time, Dr. Thirteen and Dolphin were probably as obscure to me, but they've made good since. The next character I do, also from volume VII, will be someone who I think only reappeared in Crisis after his last appearance decades before.
Batman Comics Who's This?

Anonymous said…
You are Doctor Tzin-Tzin and you have a burning desire to destroy Batman. You manage, through stealth and cunning, to subject him to powerful hallucinogens that leave him completely unable to defend himself. You decide the most fitting way to deal with a helpless Batman is a machine built specifically to bounce him 100 times and then explode.

Siskoid said…
That's it in a nutshell.

Anonymous said…
If you want to play with Batman head, use Hugo Strange. The guy only needed a strike to defeat Batman and unmask him!