Reign of the Supermen #469: Wonder Man 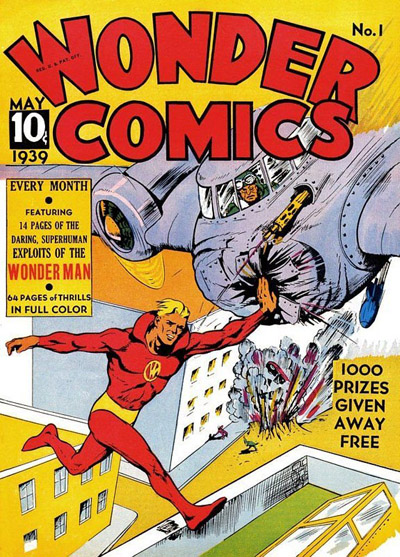 When we think of early Superman analogs, especially those what was then DC Comics went after legally with cease and desist court orders, our thoughts will usually go to Captain Marvel. But there was one hero who preceded the Big Red Cheese, much closer on the heels of Action Comics #1 (only 6 weeks later!!!), and about a year before Billy Batson ever uttered the word "Shazam". That hero was Wonder Man, a Will Eisner/S.M. Iger creation made to order for publisher Victor Fox to cash in on the Man of Steel's overnight success. DC's reaction was swift and immediate, and Wonder Man wouldn't appear in a second issue of Wonder Comics. Today, we wouldn't look at this character and think "Superman", but back when Superman was the ONLY superhero, anything like him (i.e. a super strongman in tights with a secret identity) was derivative enough to warrant legal action. Once DC and other comics companies created more diverse superheroes, the character became a whole genre, and it would require a lot more to call someone out for plagiarism. A Wonder Man appearing 2 years later, for example, probably wouldn't have been a problem. Thankfully, his one story starts with a one-panel origin so can look at how closely he matched Superman's paradigm: 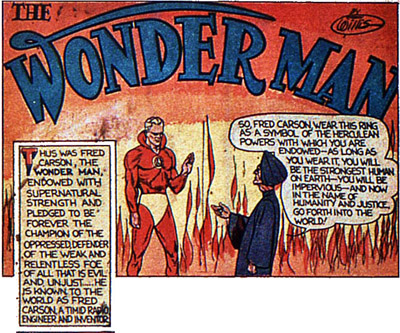 Fred Carson is given amazing strength by a magic ring given to him by Tibetan mystics, and keeps a day job as a "timid radio engineer and inventor". Those elements all sound closer to Captain Marvel's details-to-be, but we'll concede that 1) "Wonder Man" isn't a far cry from "Superman", 2) one plays at being timid and the other at being "mild-mannered", and 3) they have the same powers. Just look at how Eisner draws Wonder Man running at locomotive speeds, looks awfully familiar. 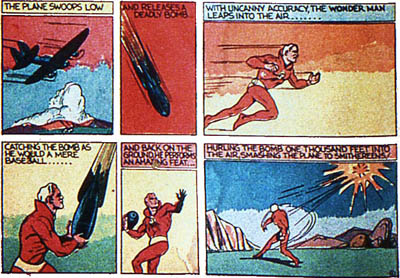 Obviously, there's also a girl around the office, the boss' daughter Brenda/Nora (this is an obvious rush job, with character names changing between panels and Wonder Man inconsistently wearing hia mask), acting as a Lois Lane stand-in.

So whatever happened to Wonder Man when he was denied a second issue? No one knows. At least he had skills he could fall back on in the job market. 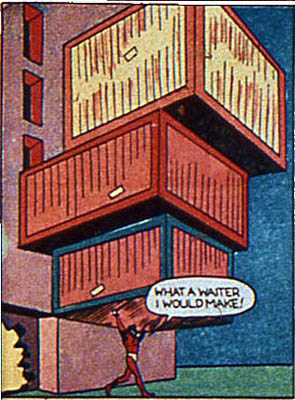 Wonder Comics would go on, and Wonder Man's loss would be The Flame's gain.

But now that nobody cares and he's fallen into public domain, Wonder Man has made a comeback through the magic of web comics! 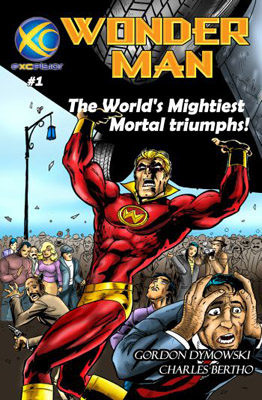 You can follow his adventures at http://wondermanexcelsior.blogspot.com !
Comics Golden Age Reign Superman