What Have I Got Myself Into This Time? 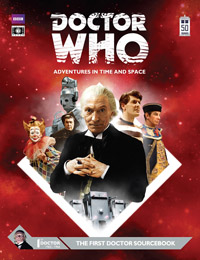 I'm well known for ambitious nerd projects, well... I got myself into another one. See, for Doctor Who's 50th, Cubicle 7, makers of the current Doctor Who RPG, is producing a sourcebook for each and every Doctor. I subscribed to get the whole set, and yesterday got my advance preview copy of the First Doctor sourcebook. It's a really cool product, in glorious black and white just like the era it teaches you how to emulate, with a section on how to reproduce the feel of that era, character sheets for the Doctor and his companions, and a gamers-first ethos in the way it covers each serial. There's a synopsis for each which I find redundant only because I own so many other Doctor Who guide books, but then goes into how the story might be played, with stats for relevant people, monsters and gadgets, further or alternate adventure ideas, and more. Choices have been made, so maybe you'll wonder why so many rebels from the Dalek Invasion of Earth are given stats while neither Nero nor King Richard are, but that's a relatively small complaint. I like this first volume a lot and can't wait to see the rest, especially the 8th Doctor sourcebook, given that there's only one canonical story to fill a 160-page book!

And that's where the ambitious nerd project comes in. We were talking about that very issue and noting the fact that Cubicle 7 doesn't have the rights to anything but the canonical (i.e. televised) material, whereas the vast majority of the 8th Doctor's adventures were told in novel and audio form. And that's when I opened my big mouth and offered to co-write, assemble, edit and even lay out a series of companion not-for-profit pdf sourcebooks for each of the Doctors covering their extracanonical adventures, those from the novels, the audios, and even some of the comics and short stories. Obviously, it's a project that's going to take more than my own efforts, and I've already secured the considerable help of Peter "misterharry" Gilham, one of the best stats-meisters on the DWAITAS boards, whose enthusiasm for the project is pretty much unparalleled at this point. The DWAITAS boards is where we're running the show FROM, incidentally, so if it's something you're interested in contributing to (or in seeing the results), they've given us our own sub-board!

We've started collecting material for the first Doctor book, and I've decided not to follow the official sourcebook's format (though I'll try sticking to its general look). Because extracanonical material is less likely to have been experienced by as many gamers, I don't want to linger on story synopses (you know how I hate spoilers), and instead concentrate on stats for companions, allies, enemies and monsters, as well as strong descriptions of locations your TARDIS might visit, each in their own section. Gadgets and temporal anomalies and tricks would also feature where applicable, and I'd like to give adventure seeds for each entry. Ideally, there'd be at least one entry of any type per novel and audio, plus memorable material from the comics and short story collections (and other media, where applicable).

For example, I fully expect the First Doctor's Extracanonical Sourcebook to feature John & Gillian, his grandchildren from the comic strips, Sara Kingdom's "ghost" from the Companion Chronicles, and the fauna of Venus from the Missing Adventures novel, Venusian Lullaby. As a taste, here are the Rocket Men stats from the Companion Chronicles audios (by MisterHarry), which would also come with descriptive text and adventure ideas in the book itself. This was a test using the basic look of The Time Traveller's Companion, not the then-unavailable First Doctor book. 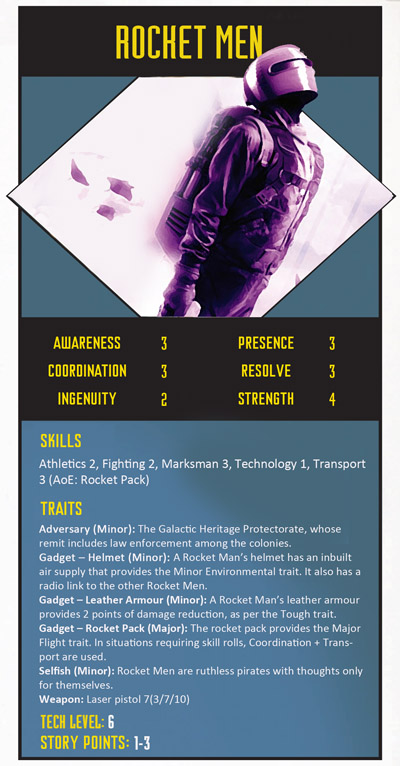 Unless fans submit art, the artwork will be poached mostly from extracanonical sources, including those old annuals, the comics, illustrated novelizations and the cover art of books and audios. I don't know how quickly we can put any of this together, but the beauty of a pdf release is that we can update it with more material as time goes on. I pretty much plan on making entries a flat full or half page, so that the layout isn't thrown out of whack every time a new submission is considered. The early Doctors have far less material to get to, and the 7th and 8th the most, but I also expect more interest from would-be contributors at that point. If we can get through the First Doctor's well enough, I think we can attract more gamers to the project, but I realize we need to find not only DWAITAS gamers, but fans of the extracanon too. Rough seas ahead.

If anyone wants to help in any capacity (for example, it's possible to write bios of characters and alien species and leave the stats work to actual gamers), they should let me know. I'll be more than happy to let them contribute. Because again, what have I got myself into this time?
Doctor Who Geeks Anonymous RPGs

Tim Knight said…
Amazing! Can't wait! Your project looks incredible and will be such an asset to the DWAITAS community at large.
March 8, 2013 at 8:16 AM