Doctor Who #506: The Armageddon Factor Part 5 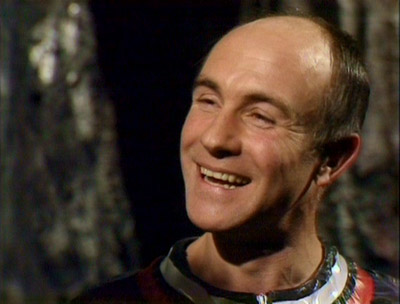 IN THIS ONE... The Doctor finds fellow Time Lord Drax on the Shadow's "planet", while K9 is corrupted by, then freed from, the villain's influence.

REVIEW: Drax is a preposterous character and he brings this episode down with him. While Holmes did deflate the Time Lords by making them stuffy, stagnating old men, they've suffered even more under the Graham Williams/Anthony Read era, where they were portrayed too often as clowns. Drax is the ultimate Williams/Read Time Lord. Like the Doctor, the Master and the Monk, he's a renegade, but unlike these ambitious rogues, he just wants to make some cash selling technology (like the Zeon computer). Throw in a Cockney accent - not because every planet has an East End, but because he spent 10 years in jail in Brixton - and you have a character designed to be "funny" and really isn't. Just when we got rid of Shapp too... Mind you, it's not just the accent and vernacular, it's what he has to say. Always wondered what the Doctor's name is? Well, the writers have decided to reveal it on the occasion of wrapping up the Key to Time season and it's... Theta Sigma! (Annoyingly, Theet to his school chums.) Wow, a couple of Greek letters, probably a reference to algebra. We'll see those letters referred to again in the future, but overall, future writers decided to ignore it or treat it as just another nickname. After all, it doesn't sound like Drax or Romanadvoratrelundar or any other name we've heard. It's supposed to be this big thing, but you can hear the crickets in the audience when it happens. Drax doesn't even make a good henchman for the Shadow, quickly giving up the game and working with the Doctor, where he's even more useless. The cliffhanger has him shrink the Doctor instead of a Shadow stooge while the TARDIS door is open. Aggravating.

The Shadow himself is a problematic character. He could have been quite poetic, a veritable shade ruling in a dank hell, or the Doctor's dark side, a manifestation of his guilt and fear. But no, he's a bore with badly applied dirty black make-up, ruling a space that is said to be a planet and looks like a planet on the inside, but is a high-tech space station on the outside. It's a mess, really. He can turn the place into a hall of mirrors, but it doesn't do anything. And he can compromise K9 all he wants, the Doctor will still disable his tin pup... how exactly? K9 is usually presented as an invulnerable tank, but here the Doctor just startles him and pushes him down a soft incline and he's helpless.

I suppose the best parts of the episode are its dilemmas. I like the Catch 22 of needing the tracer to find the last segment, but not being able to remove the tracer from the Key lest the whole system explode. And the Black Guardian's plans for the Key are epic, bringing the same kind of unending war we saw between Atrios and Zeos to the entire universe. Universal war should be enough chaos for the entity to feed on for eternity. (I'm guessing. We don't really know much about their "ecology".) Unfortunately, that's not a whole lot to enjoy, so I mostly felt like Romana, put to the torture.

REWATCHABILITY: Medium-Low - Drax is ridiculous and sucks the drama right out of the episode, not that it would have fired on all cylinders even if he hadn't been in it.
Doctor Who