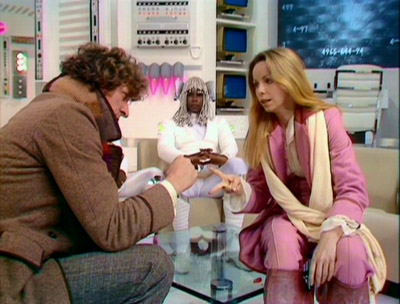 IN THIS ONE... The Daleks and Movellans are at a logical impasse. The Doctor, Romana and the freed slaves defeat them all. Davros is put into a freezer.

REVIEW: Ok, let's talk about the central concept of the episode (and of the serial). Can we buy the idea that two evenly-matched battle computers, even if they are the result of completely different cultures, will inevitably reach a stalemate? Even when the two soldier races are completely different? And that they can't reprogram those computers even a little bit without the help of some less logical being, like Davros or the Doctor? It's a fun idea, and I love the bit where the Doctor and Romana demonstrate for the kids at home with a good game of rock-paper-scissors, but no, I don't really buy it. I guess what's bugging me most is that for all their logic, the Daleks AREN'T machines. It drives me nuts that Davros calls the Movellans "another race of robots", because his own creations AREN'T robots. Has Terry Nation forgotten everything he's previously written? Or is it Douglas Adams' script editing? Either way, Part 4's script forgets even Part 3's! There, the Daleks couldn't understand the logic of mutually assured destruction - the Doctor couldn't possibly blow himself up to kill Davros. But here, they accept Davros' orders to make a suicide run on the Movellan ship. And the Movellans, apparently just as logical as the Daleks, send a man out to kill himself in order to set off the Nova Device.

The villains all seem a little silly to me, but not just because they're in the background playing rock-paper-scissors. The Movellans can be disabled so easily, it's ridiculous. Just grab that thing off their belts and it's all over. Worse, they can easily be reprogrammed to work for their enemies. And if that fails, the Doctor's dog whistle scrambles their brains (K9 must've been going crazy, trapped in the TARDIS behind Styrofoam rocks, later to be thrown around like the light objects they are by the two Time Lords). And the Commander gets his arm ripped off in a scuffle with Romana, which means they're fragile too. If the Daleks had hands, maybe they could have defeated the Movellans long ago. But the pepperpots have problems of their own. Put a hat on its eyestalk and it panics until it blows itself up! That's worse than in Death to the Daleks, even. Davros, in a way designed to give the Daleks a more animated voice, is stuck behind a stiff mask, but I do like how the Doctor makes his hand snap on the destruct button. Plenty of satisfying Dalek explosions in this at least.

Is there anything I liked aside from a couple of hand tricks and explosions? The soft "g", hard "g" bit about Agella's name. I liked it because it played with how names sometimes changed pronunciations between location and studio. And yeah, I'd correct someone if they screwed up my name. And Romana throwing down in the mud to fight a (presumably) super-strong robot, that takes some guts. She might have ruined her pink coat, you know. I'm ambivalent about ever seeing Davros again after this outing, but it's inevitable. He's due to stand trial for the Daleks' crimes, so he'll come out of the fridge some day or other. At least he won't be played by David Gooderson or written by Terry Nation.

THEORIES: Davros created the Daleks, but who created the Movellans? First seen in Destiny of the Daleks after centuries of war, they'll only merit one more mention, as the creators of a devastating virus in Resurrection of the Daleks. We never find out who built them or how they started fighting the Daleks. Extracanonical material suggest a couple answers, neither of which is particularly winning. Ben Aaronovitch's The Also People suggests they destroyed their creators after a computer virus gave them independence. Fine, but still vague. In John Peel's War of the Daleks, the Movellans may have been created by the Daleks themselves, and their war faked as part of temporal shenanigans to prevent Skaro's destruction. But War of the Daleks tries so hard to make sense of contradictions in Dalek history, it's widely considered to be professional fanwank. Still, if we combine the two ideas, we get a race of humanoid robots created by, and rebelling from, the Daleks. That's why the Daleks are using human labor now, and why the Movellans know all about Davros. And maybe that's why their computers are so evenly-matched - they're the same ones, the Movellans having appropriated Dalek tech as their own. Of course, this is also my go-to theory about the Sontaran-Rutan War, so...

VERSIONS: In the Target novelization, the action occurs at night, and the Daleks use hoverbouts to chase the Doctor. The DVD's CGI option adds the same glowing effects to guns and ships, but also makes the loose Movellan arm's tubing light up with power. Overall, I have to say this wasn't the best use of CG on a classic Doctor Who story. The changes were minimal, garish and not at all needed.

REWATCHABILITY: Medium - Despite my nitpicking, this is a perfectly fine action piece. Jeopardy, spectacle, humor, but if you need to buy the premise to buy the bit, I'm afraid I just don't buy the bit.

STORY REWATCHABILITY: Medium - At times silly, at others incoherent, with by turns limp or dynamic direction, Destiny is a thing of many parts, many of them flawed. Part 1 features the introduction of the new Romana, lots of humor, and some pretty cool location work and set designs, but after that, it mostly falls apart. Just sit back and enjoy Part 4's kabooms.
Doctor Who

Anonymous said…
Yes, the Movellians as written in this story are trash but there is so much potential there.

If I was rewriting them (the Movellians) I would have the computer virus that made them independent AIs have been created by the Daleks to destroy an enemy human empire and ended up creating an even more dangerous foe.
April 16, 2013 at 11:12 AM